A Question about injuring plants?

Dear Friends, first allow me to apologize for my lack of proper framing of the question which I now humbly ask: but this passage is somewhat confusing regarding ‘injury’ to plants.
I have purposefully avoided killing the ants which now-for reasons unspoken- have invaded my kitchen. But plants? I confess that I have done my share of plant cloning. Have I violated some obscure prohibition in my ignorance ?

And I ask this with great respect for the Noble Eightfold Path. But if Buddha did not eat meat nor injure plants…what nutritional sources did he exploit?

I look forward to your comments. Thank you and ay you have one day free from suffering. with Metta!

I have purposefully avoided killing the ants which now-for reasons unspoken- have invaded my kitchen. But plants? I confess that I have done my share of plant cloning. Have I violated some obscure prohibition in my ignorance ?

I believe this is a Vinaya rule intended for monastics, not householders. Monastics generally shouldn’t need to do anything with plants, as they depend upon lay supporters for their food.

My understanding of the reasoning behind this rule is to avoid offending people at the time who held the animist belief that plants were “one-facultied life”, with that one faculty being the sense of touch. Many people also believed that devas or other spirits lived in trees and plants. So, as I understand it, the Buddha wished for his disciples to be considerate of those who held these beliefs.

Perhaps he also wanted to make sure that monastics weren’t growing their own food (they also aren’t allowed to dig into the earth, if I recall correctly). This kept them dependent on the laity for their sustenance.

But if Buddha did not eat meat nor injure plants…what nutritional sources did he exploit?

He ate both meat and plants, but they were always offered by laypeople.

By the way, ants don’t like to walk across cinnamon or chalk and will not cross a line of vaseline. If you can find where they’re entering, these strategies may help.

Often a reason for ant invasion is thirst. Offering water outside, for the well being of many, might be useful both from practical and spiritual POV.

Cinnamon, garlic, vinegar, mint, basil, chili peppers, eucalyptus, lavender, rosemary, thyme all as strong smelling substances can repell or create barriers ants will avoid. Black pepper will cause them to flee; look for their preferred exit and put a barrier there.

Ven. Brahmali’s translation on SuttaCentral seems to be down, but
Ven. Thanissaro’s translation of the rule is accessible, and though it refers to avoid offending people, it doesn’t imply that the belief that some devas inhabit plant life is a wrong one – in fact, a literal reading of the rule would seem to imply that such a belief is correct.
(The story that goes with the rule directly talks about a devata living in a tree and a bhikkhu cutting the tree down, but does not refer to beliefs on the matter.)

Thanks, Nicolas. I didn’t intend to imply that the Buddha did or didn’t approve of the belief, though, in rereading my post, I can see how it might be construed that way.

Thanks for the clarification

A number of publications confirm exactly what @Christopher wrote, namely that the according rules were set up to accommodate specific populations and their beliefs.

I can recommend Schmithausen’s detailed publications, e.g. “Problem of the sentience of plants in earliest Buddhism”, “Plants in Early Buddhism and the Far Eastern Idea of the Buddha Nature of Grasses and Trees”, “Buddhism and Nature”.

Schmithausen concludes btw (as far as I recall) that the Buddha himself did not believe in the sentience of plants themselves.

Just the addition that not just random people had animistic beliefs about “one-facultied life”, but most prominently Jainism.

A number of publications confirm exactly what @Christopher wrote, namely that the according rules were set up to accommodate specific populations and their beliefs.

I had a look at the first one, and he states that this interpretation comes from a latter layer of the text and he thinks that originally plants were considered by Early Buddhists as border-line living beings (with the protection from harming that it implies), his concluding remarks are quite nice: 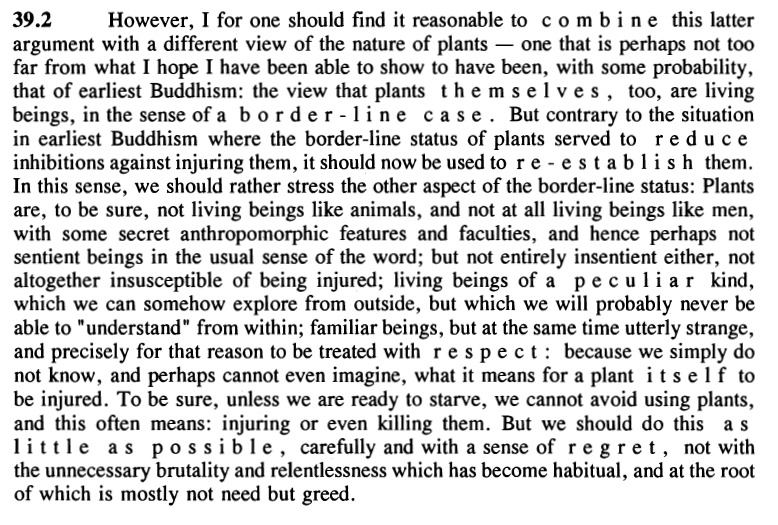 So he is not exactly agreeing with the view that these rules were there only for accomodating people it seems.

I haven’t read those articles, but the Vinaya quote doesn’t imply the sentience or Buddha-Nature of plants, merely that they can be inhabited by devas.

The EBTs don’t mention “planthood” as being an option for birth (unless you’d include it in a deva realm, but that would seem like a stretch since plants are barely mentioned throughout), so it seems natural to me to conclude that plants don’t have sentience according to the Buddha.

Thanks for looking it up and for the correction!

Thank you all for a fascinating discussion. I have learned much from the discussion, which is deep and I have gained a greater understanding of our relationship with plants. This has caused me to reflect on the meaning of sentience and intelligence.

Indeed a plant would have a very difficult time meditating or practicing the Dhamma in preparation for a positive rebirth. Yet their collective wisdom compared to what humans call intelligence is vastly superior in their form and function.-not to mention the benefit they provide us humans without an expectation of payment.

I asked this question mainly because I have taken a vow of non-violence, and the ants do not cooperate. So I end up blowing on them to relocate them without violence. Yet this must seem like a tornado or a hurricane with my saliva representing the rain driven by my breath which is a powerful gust to an ant.

I shall endeavor to practice non violence. Perhaps next I will build the ants a storm shelter. [sigh] May they…and you be free from suffering today.
With Metta,

I am not by any means suggesting that your house is full of food scrap. But I know from my personal experience that ants get attracted to tiny food particles which we unintentionally drop on the floor. Apparently, they can sense them from very far away and when they do sense them they start to come in processions.

May be you can take a look around and if you find that the ants have been coming for food, then the solution is to keep the place neat and tidy.
Just my thoughts please.
With Metta

I have some large house spiders which sometimes come out to watch TV.

the solution is to keep the place neat and tidy

Oh great. So now I need to clean under my refrigerator? Life truly is suffering. Refrigerator Dukkha? LOL

Thanks truly, but considering the American southwest is in an endless drought-okay so nothing is endless but it seems that way-we think they are just very thirsty. I put a bowl of water outside for them but many of them committed accidental hari-kari. Apparently Japanese ants without an understanding of cause and effect.

Very interesting but I maybe too dull to grasp your point. Could you elaborate? Is accidental harm superior to intentional harm? Does a vow of non-violence allow for the accidental harming of sentient beings.

I look forward to hearing your explanation With Metta

You have my sympathy. Spiders can be very picky as they often insist on watching gardening show and nature shows.

I am more than happy to elaborate. Thank you for your kind response.

“And what is right resolve? Being resolved on renunciation, on freedom from ill-will, on harmlessness: This is called right resolve.” - SN 45.8

Consider intent in a given moment. If the intent manifests with the clarity of mindfulness and is free of intent to harm (now in moment or in future), then renunciation and harmlessness is result. Mind may “auto” liberate defilements responsible for form in the mind of harmful interactions. One may trust mind to do right thing if mind is able to be mindful in moment to moment and sincere intent exists (prior) to not cause ill-will.

A monk once told me his defilements/visualizations were easily “flicked” away when they manifested. His ability for them to auto liberate was manifested by right resolve, intent and practice of mindfulness.

Auto liberated defilments or not, one may unintentionally harm another (in a given moment) either through direct action (perhaps via ignorance) or inaction (perhaps via non-mindfulness). In those cases, the harm caused is not tainted with intent of ill-will or wrong resolve.

Given the “facts” of impermanence, it would be irrational to expect one to not cause harm to another in the future, regardless of intent to do so.

Irrational actions represent unknown amounts of work worrying about things that may come in the future, which itself does not exist and/or is emptiness defined.

If intent is simply to do no harm, that is fine. It may be that harm still occurs, however. In those cases, regret may create clinging to idea of no harm.

If intent is right intent and right understanding of doing, this gives one extra means to not act on ill-will (even if it does arise in internal form in a given moment) and is maybe better solution to simply intent to do no harm in future.

By the way this is Harakiri. LOL
With Metta

Respectfully, what was the cause behind whatever caused public comment?