Hi friends. I signed up to get an answer to 2 simple questions. I have an idea for a tattoo I want and I’m quite inspired/influenced by Buddhist teachings in my daily life so I wanted a permanent reminder of their power. I was hoping someone could translate the following English phrases into Pali for me:

Believe it or not, I get asked about tattoos quite a lot. To be honest, if you want a tattoo in Pali, i would recommend doing some reading of Pali texts, maybe the Dhammapada, and choose something you like. Usually when people want something translated into Pali, it ends up being bland and unidiomatic, and such is the case here. We could say:

But it isn’t a great phrase. In fact, in Pali we rarely describe words as “wise”; a person is wise.

May I suggest why not something like this from the Dhammapada:

Better than a thousand useless words
is a single meaningful word that brings you peace.

Oh, and by the way, don’t complain, as many have before, that it isn’t “real” Pali! Pali is a language, not a script. If you want something in devanagari script, you’ll have to specify that. But anyway, i don’t recommend it: devanagari is a (relatively) modern Indic script that has never historically been used for Pali.

@sujato
If you want to hear something funny (or maybe sad) when I first got interested in learning Pali someone who considers herself a Dhamma teacher told me I had to learn Pali in Devanagari because that was ‘true Pali’. I did learn the script because I thought it was lovely but unfortunately then promptly forgot it as I never used it or read anything in it.

There is a pleasant phrase that might be used for this in the Sāriputta Sutta, snp4.16, reiterated in the verses to several Jātakas:

“One should utter skillful words that are not untimely.”
Bh. Thanissaro

“He should utter a good word that is not untimely.”
K.R. Norman

“Let him utter in season due the expert word.”
E. M. Hare

My own preference would be to use ‘deliver’ for the verb pamuñcati, sticking more closely to its literal meaning, ‘to liberate’, ‘to set loose’:

“Let him deliver in due season speech that is wholesome.”
Bh. Dhammānando

Thanks for all the great replies!

There’s some good suggestions in here but they won’t work, unfortunately. You see, I’m planning to get the tattoo on my neck and it’s important that the phrase be short. I’m willing to do a bit of searching myself but I’m not too familiar with the Suttas. Most of my knowledge of Buddhism comes from other practitioners and scholars, not from the Suttas themselves.

I’m not averse to doing a little digging myself, though. Any helpful suggestions as to where to start would be much appreciated!

Perhaps it would help for you all to understand the context: the premise of the tattoo is to remind me (as well as those who know me) to choose my (their) words carefully and to speak with wisdom. It’s an important reminder as I’ve misused my words too often in my life and have worked very hard towards overcoming that character flaw.

My initial interest in this tattoo came from my coming across the third of the Noble Eightfold Path: Right Speech. I suppose that might be as close to what I’m looking for that I might get. I’m not sure about getting “Samma Vaca” (thats right, right?) on my neck, though; although I’ve been greatly inspired by Buddhism and have made meditation an almost daily practice, I’m not a Buddhist and I’d hate to offend anyone - thoughts?

That would fit on the neck easily.

If you wear a wrist watch, maybe next to the time piece near your wrist would work better. Visible to others, and to you.

I will be the spoiler in this interesting conversation. It is thought that a neck tattoo is an employment hazard, so my thought would be to be mindful of the effect that a neck tattoo might have on your future. Picture yourself in 10 years and decide if a neck tattoo will still be a great idea. http://www.npr.org/2014/02/21/280213268/job-seekers-still-have-to-hide-tattoos-from-the-neck-up

I am not against tattoos…my son and I both have Sak Yant tattoos from Thailand…mine is the Buddham (Dhammam, Sangham) saranam gacchami in three lines on my inner forearm in Shan (Burmese) script. Some of us that were temp. samaneras together traveled (after we disrobed) to northern Thailand to get these tattoos from an old Sak Yant master. But, at the end of the day, easily covered in an office or public context.

I hope I don’t sound like an old curmudgeon here…

I’m not a Buddhist and I’d hate to offend anyone - thoughts?

I also don’t want to sound like an old curmudgeon, but I think it’s important to realize that the tattoo could bode poorly if you’re intending to visit any majority Theravada Buddhist countries. For instance, see: 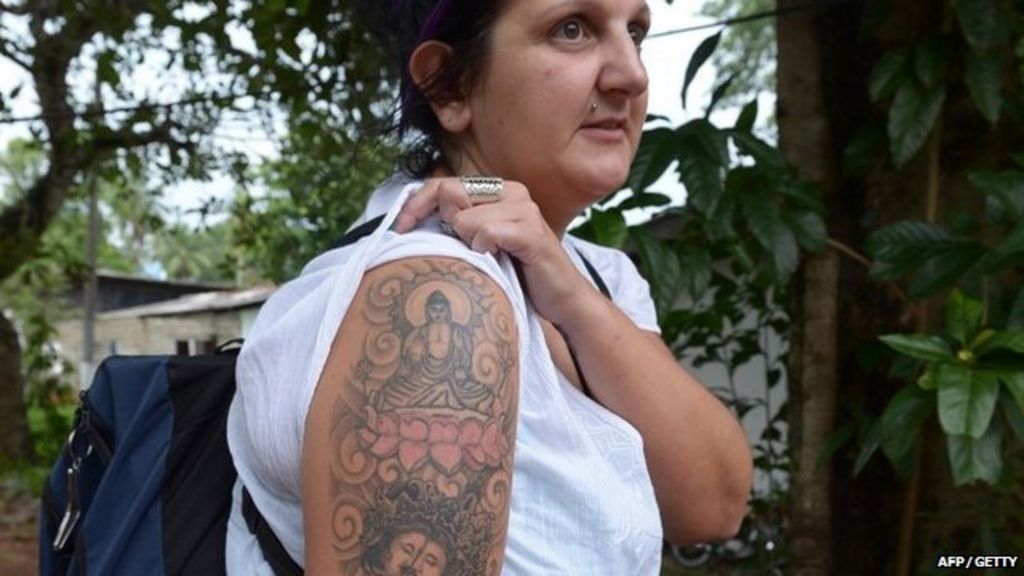 The Sri Lankan authorities order the deportation of a British tourist because she has a tattoo of the Buddha on her arm.

While I’m personally not against Pali/Buddhist tattoos – I just don’t want you to get deported!

I’ve got absolutely nothing useful to add to the matter at hand.

I just wanted to say how happy the following made me (I relate - save for the feeling of being anywhere near overcoming that particular flaw):

It’s an important reminder as I’ve misused my words too often in my life and have worked very hard towards overcoming that character flaw.

I do get my kicks from odd places and celebrations of right speech is one of them.

I also don’t want to sound like an old curmudgeon, but I think it’s important to realize that the tattoo could bode poorly if you’re intending to visit any majority Theravada Buddhist countries. For instance, see:

The Sri Lankans take issue with the Buddha’s picture being used as tattoos (tattoos being considered a sign of an underworld figure). I see no issues with any kind of text, except they might judge you, without displaying any overt reaction. Best to keep it covered I suppose.

Huh that’s interesting. I guess I was thinking that text in Pali would be problematic seeing as it in some sense represents the Dhamma, and thereby might be seen as offensive or disrespectful.

[quote=“torvum, post:1, topic:5360”]
“Wise words”
“Speak wisely”
[/quote]This āgama quote is vaguely like part of what you were looking for: [quote]諦聽，善思。[/quote]It means something akin to “listen careful[ly and] think wise[ly]”, its context being the parallel of SN 43.12, is the Buddha extolling his sangha to listen carefully as he expounds the Eightfold Path.

I guess I was thinking that text in Pali would be problematic seeing as it in some sense represents the Dhamma, and thereby might be seen as offensive or disrespectful.

It’s less complex than that. There’s been a spate of Buddha’s pictures appearing on toilet seats, underwear bottoms, music videos and such like that they were objecting to as being disrespectful.

So many replies! I won’t be replying to everyone directly but I definitely read everybody’s responses. Thanks for all the good advice.

Lol, Frankk, it’s not supposed to be a continual reminder that requires me to be checking the mirror all the time. I also won’t actually have to be reading it (since I know what it says) so having it mirrored on me won’t be necessary. The idea is that I’ll see it in the mornings after my shower and hopefully it will serve as a reminder to stay on the right path.

@Brenna I’m not getting any imagery of the Buddha so I’ll avoid the Sri Lanka pitfall, but I’ll double check about what’s considered distasteful in other majority Theravadist countries - thanks!

At AnagarikaMichael: And yes the neck is a rather exposed location and in some industries it could reduce my employability, but I work in the restaurant industry in Toronto and it’s certainly not an issue there, except in perhaps in some fine dining restaurants and I’m not even sure of that, not that I would want to work in fine dining anyhow.

If I ever end up switching industries it will be into the computer industry and I doubt it will effect my choices much. Plus, I like to think of it as I kind of filter; if you won’t hire me for superficial reasons then there’s a good chance I won’t enjoy working under you - it’s better for both of us if I avoid your workplace.

@Aminah I said that I’ve worked very hard TOWARDS overcoming it. I don’t think I’ll ever totally overcome it, but it’s definitely my goal.

What is this is Páli in English, as loosely-or-directly “word for word” as is reasonable, bhante?

The Lord spoke thus: “Monks, I will teach you the disquisition on the forest grove. Listen to it, pay careful attention to it, and I will speak.”
“Yes, Lord,” the monks answered the Lord in assent.
MN17