A timeline of Early Buddhist Sectarianism

I am dealing with a fair amount of ignorance surrounding the precise chronology of early sectarian Buddhism.

Is there any concrete date when any of these schools split and emerge? Or is the scholarship as hazy and tentative, due to a lack of textual accounts, as it seems to be?

A nice read on this topic, written by @sujato, is found here: 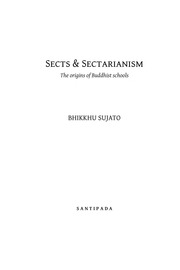 Why are there so many schools of Buddhism? Are the differences just cultural, or do they have fundamentally different visions of Dhamma? This work assesses the...

Is there any concrete date when any of these schools split and emerge? Or is the scholarship as hazy and tentative, due to a lack of textual accounts, as it seems to be?

Pretty much, yes. There are a multitude of conflicting accounts, and in addition, a rather annoying proliferation of bad arguments in modern scholarship. Having said which, the primary sources are not that bad, all things considered, and it is possible to get a reasonably coherent idea of what probably happened. Since I wrote the book so kindly linked by @Gabriel_L, I haven’t seen any reason to change my main arguments; on the contrary, I’m more confident about it today.

The key is to realize that each of the accounts we have is sectarian, which means that it was composed by a school in order to authorize their own specific point of view. This means that all the accounts are, in some sense, origin stories, which owe as much to mythology as they do to history.

To ward off misunderstanding, by “mythology” I don’t mean “falsehood”, but narratives whose primary purpose is to create a sense of community through emotional connection and transcendence. So history and mythology are not mutually exclusive; rather, they are different aspects of the same thing. They may or may not be true in the sense of things that actually happened; but they are felt to be true in a sense that transcends mere time and space: “things that never were, but always are”. So when we encounter mystical or impossible things in the accounts, we shouldn’t simply reject them, but use them to help understand better the underlying identity and desires of the school.

Anyway, here’s what we can say, so far as is based fairly securely on the original accounts, and is reasonably generally accepted today.

All the accounts agree that the primary doctrinal schism was between the Sthavira and Mahāsaṅghika. These schools subsequently divided into multiple schools, which became known as the “18 schools”. The number 18 is conventional. In fact there are many more schools than this mentioned in the accounts, and of course this changed over time. On the other hand, most of these schools were mere regional variants, and there were only about four or five really significant doctrinal schools.

Here they are, with their most distinctive doctrines:

The first three are descendants of the original Sthaviras. I could expand this with other schools, but it is not clear how many of these were really distinct in doctrinal terms.

Here are the specific points that I argued for in my book:

Is it possible to draw a family tree chart or a list in rough chronological order from the Sects & Sectarianism like below?

Is it possible to draw a family tree chart or a list in rough chronological order from the Sects & Sectarianism like below?

Three such charts were included in the English translation of the Kathāvatthu, illustrating school filiation according to the Buddhaghosa, Vasumitra and Bhavya. Then there are several more in Lamotte’s lengthy discussion of filiation in his Histoire. Those published after Lamotte (e.g. in the books of Nalinaksha Dutt, Akira Hirakawa, etc.) are largely derivative of Lamotte’s work. See the attached files. 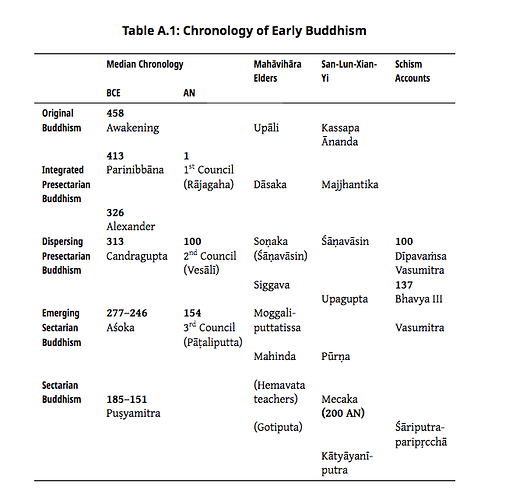