Here are some excerpts, which I have highlighted. Let us hope that finally we listen.

Of all the challenges faced by the world community in those four years, one has grown clearer than any other in both urgency and importance—I refer to the threat to our global environment. I shall take the opportunity of addressing the general assembly to speak on that subject alone.

Of course, we have learned much detail about our environment as we have looked back at it from space, but nothing has made a more profound impact on us than these two facts.

First, as the British scientist Fred Hoyle wrote long before space travel was a reality, he said “once a photograph of the earth, taken from the outside is available … a new idea as powerful as any other in history will be let loose” .

That powerful idea is the recognition of our shared inheritance on this planet. We know more clearly than ever before that we carry common burdens, face common problems, and must respond with common action.

And second, as we travel through space, as we pass one dead planet after another, we look back on our earth, a speck of life in an infinite void. It is life itself, incomparably precious, that distinguishes us from the other planets.

What we are now doing to the world, by degrading the land surfaces, by polluting the waters and by adding greenhouse gases to the air at an unprecedented rate—all this is new in the experience of the earth. It is mankind and his activities which are changing the environment of our planet in damaging and dangerous ways.

We are seeing a vast increase in the amount of carbon dioxide reaching the atmosphere. The annual increase is three billion tonnes: and half the carbon emitted since the Industrial Revolution still remains in the atmosphere.

At the same time as this is happening, we are seeing the destruction on a vast scale of tropical forests which are uniquely able to remove carbon dioxide from the air.

Every year an area of forest equal to the whole surface of the United Kingdom is destroyed. At present rates of clearance we shall, by the year 2000, have removed 65 per cent of forests in the humid tropical zones.

The consequences of this become clearer when one remembers that tropical forests fix more than ten times as much carbon as do forests in the temperate zones.

The result is that change in future is likely to be more fundamental and more widespread than anything we have known hitherto. Change to the sea around us, change to the atmosphere above, leading in turn to change in the world’s climate, which could alter the way we live in the most fundamental way of all.

That prospect is a new factor in human affairs. It is comparable in its implications to the discovery of how to split the atom. Indeed, its results could be even more far-reaching.

We are constantly learning more about these changes affecting our environment, and scientists from the Polar Institute in Cambridge and The British Antarctic Survey have been at the leading edge of research in both the Arctic and the Antarctic, warning us of the greater dangers that lie ahead.

Let me quote from a letter I received only two weeks ago, from a British scientist on board a ship in the Antarctic Ocean: he wrote, “In the Polar Regions today, we are seeing what may be early signs of man-induced climatic change.

He also reports on a significant thinning of the sea ice …

“The lesson of these Polar processes,” he goes on, “is that an environmental or climatic change produced by man may take on a self-sustaining or ‘runaway’ quality … and may be irreversible.” That is from the scientists who are doing work on the ship that is presently considering these matters.

But the problem of global climate change is one that affects us all and action will only be effective if it is taken at the international level.

It is no good squabbling over who is responsible or who should pay. Whole areas of our planet could be subject to drought and starvation if the pattern of rains and monsoons were to change as a result of the destruction of forests and the accumulation of greenhouse gases.

We have to look forward not backward and we shall only succeed in dealing with the problems through a vast international, co-operative effort.

Before we act, we need the best possible scientific assessment: otherwise we risk making matters worse. We must use science to cast a light ahead, so that we can move step by step in the right direction.

The multinationals have to take the long view. There will be no profit or satisfaction for anyone if pollution continues to destroy our planet.

We should always remember that free markets are a means to an end. They would defeat their object if by their output they did more damage to the quality of life through pollution than the well-being they achieve by the production of goods and services.

The most pressing task which faces us at the international level is to negotiate a framework convention on climate change—a sort of good conduct guide for all nations.

But a framework is not enough. It will need to be filled out with specific undertakings, or protocols in diplomatic language, on the different aspects of climate change.

These protocols must be binding and there must be effective regimes to supervise and monitor their application. Otherwise those nations which accept and abide by environmental agreements, thus adding to their industrial costs, will lose out competitively to those who do not.

We are not the lords, we are the Lord’s creatures, the trustees of this planet, charged today with preserving life itself—preserving life with all its mystery and all its wonder.

May we all be equal to that task. 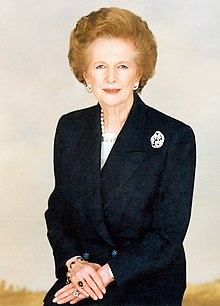 The occasion was an address to the UN General Assembly on Nov 8, 1989. Read the full speech here.

For those who grew up in my generation, Thatcher was the embodiment of callous right-wing extremism. And yet, compare her words here with what is routinely peddled by denialist politicians today. It’s shocking how far we have fallen, and sobering how little progress we have seen.

The World Health Organization (WHO) reports that climate change is responsible for at least 150,000 deaths per year, a number that is expected to double by 2030.

It’s shocking how effective climate change obfuscation has been. So many people tallying up the deaths attributed to this or that cause or ideology while their current system is in the middle of seemingly trying to surpass every single other as far as destructiveness. I know we’re still quite a ways off from equaling some of the worst mass death events in human history but this is not a linear increase and past a certain point, BILLIONS of deaths will be unavoidable.