I made a chart to make it easy to visually compare 3 different schemes for classifying jhāna/samādhi. I hope it’s useful for someone! 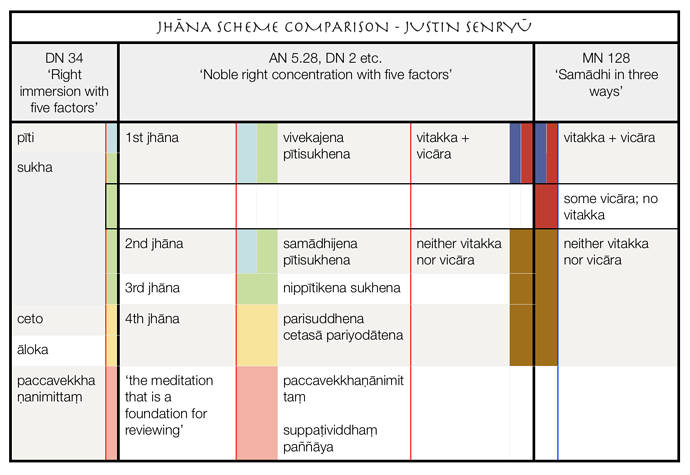 Perhaps you also can looking to.

What is the difference between Jhana and Samadhi?

No expert here, but i think that word-history is different, Jhana is related to Jhayati (burning), while Samadhi is related to completion & stillness. The usage in sutta seems similar though.
See here for expert opinion (The Jhanas in Theravada Buddhist Meditation)

I think Samadhi refers to the fulfillment of Jhana (fourth Jhana)
Jhana refers to individual steps such as fist, second, third and forth Jhana etc.

What is the difference between Jhana and Samadhi?

Jhāna is a subset of samādhi. Samādhi has a braoder meaning. There are various articles on the web that may be useful to read.

Thanks for preparing this–I believe these kind of diagrams are useful to help understand the interplay of factors. What do the different colors (green, blue, red, dark blue, etc) refer to?

Five-factored right concentration includes discernment at each jhana step. It is by means of reflection on the imperfection of the previous jhana that it is abandoned, so discernment is a factor in all four:

"And furthermore, the monk has his theme of reflection well in hand, well attended to, well-considered, well-tuned[1] by means of discernment.

“The meditator in third jhana is also said to be mindful and discerning, which points to another pair of frequently conjoined mental functions. Mindfulness (sati), in this context, means the remembrance of the meditation object, the constant bearing of the object in mind without allowing it to float away. Discernment (sampajañña) is an aspect of wisdom or understanding which scrutinizes the object and grasps its nature free from delusion. Though these two factors were already present even in the first two jhanas, they are first mentioned only in connection with the third since it is here that their efficacy becomes manifest. The two are needed particularly to avoid a return to rapture.”—Gunaratana The Jhanas in Theravada Buddhist Meditation

The strategy of abandoning of one meditation subject in favour of another by seeing its imperfection is also used in MN 121. This strategy necessitates polarizing the previous subject so it becomes the opposite of the present subject (SN 14.11).

Thanks for preparing this–I believe these kind of diagrams are useful to help understand the interplay of factors. What do the different colors (green, blue, red, dark blue, etc) refer to?

Sorry to take time to answer, I’m not often here. The colours are to make comparison easier. See the far left for the meaning of left colours - you can see blue for pīti and green for sukha in DN 34, and then see which stages have these in AN 5.28/DN 2, which have them both present for the first two stages in that system, pīti only disappearing in the 3rd step.

For the right colours, see far right. Where AN 5.28 differs this is indicated with colour, i.e. missing isolated red stage. Does it make more sense now?