I just wanted to thank @JimInBC for making me think about noun declension in Pāli.

I am starting to think that the reason why it is so hard to deal with so many Pāli noun forms is that we tend to think of the noun declension tables as representing one system. But another way of thinking of them is to think of them as actually being two major historical systems mushed together at the same time.

Kind of like the part of an estuary that will have both salt water and fresh water all together. You could try to understand the estuary, or you could try to understand salt water and fresh water themselves, and then know that they mix together. There’s not actually really a point where you can say it stops being river and starts being sea because these are artificial distinctions. Which is a little like Pāli: there isn’t actually a point where it stops being Sanskrit and starts becoming Prakrit, it is just in the middle.

So I made a more complete set of masculine -a stem charts to express myself (I have added Prakrit below). Maybe the conventional tables will actually look easier by comparison. 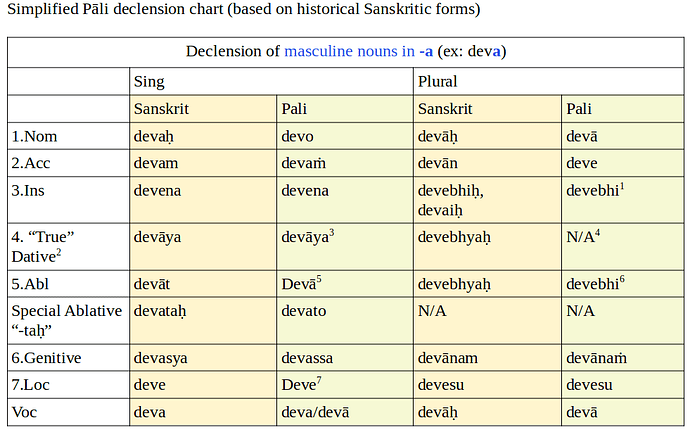 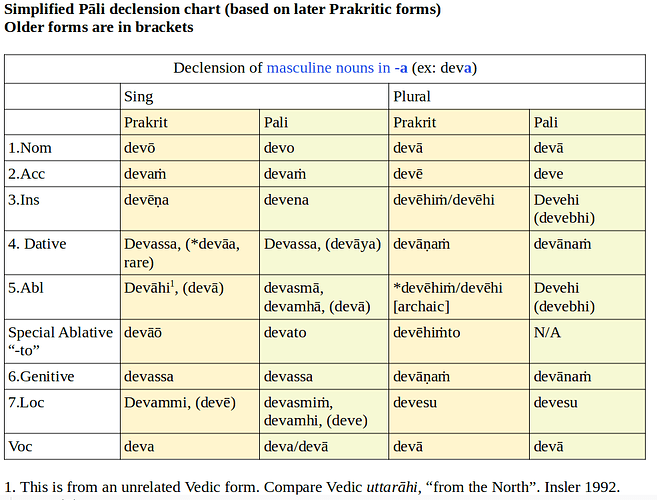 Thank you, Ayyā Suvīrā, for taking the time to create these.
Greatly appreciated!

No worries, any time! (Well, except for the times I am supposed to be doing Sanskrit stuff).

Morphology is so interesting.

I was also recently sent an excellent unpublished honours’ thesis on MIA languages by Blair which suggests that the reason for the use of pronominal forms in the ablative and locative sing. is to avoid polysemous endings -e and -aa, which each represent two different forms. I.e. -e could either be a masc. loc. sing or acc. pl; -aa could be either abl. Sing or nom pl (among other things).

This makes sense to me, as the pronominal forms don’t have this problem.

Thank you Ayyā, for this interesting information.

I can understand the logic of moving away from polysemous endings towards unique pronominal forms. But how does this idea coordinate with the idea of Pāli possibly being an artificial language in the first place, i.e. not actually spoken by anyone?
Or perhaps, as I understand Gombrich suggests, a type of ‘lingua franca’ uniquely spoken by followers of the Buddha?
If Pāli is a later ‘streamlining’ of various Prakrits, a type of amalgam, wouldn’t there be a move to eliminate the older, ambiguous endings?

Re: move to eliminate ambiguous endings.

Movement of the pronominal endings into other declensions is something that happens in Prakrits in general, with the takeover of pronominal endings in the locative especially. As this is not a unique feature of Pali, I don’t think it contributes to the “Pali as artificial language” hypothesis. It just shows that Pali is Prakrit too.