Ajahn Brahm Has Resigned From the BSWA

Some interesting news from today:

Dear Member I wish to inform you that at tonight's Society Annual General Meeting, Ajahn Brahmavamso resigned, without notice, from his post as Spiritual D

Thank you for sharing this. It cannot have been an easy decision for him. I wish all involved a clear eye and wise heart as they process the changes happening.

There’s is more info on’the big blue f’.
There will be an SGM to attempt to resolve this soon. Members of BSWA should do some research into who to give proxy votes to.

Alright, so I’m completely unfamiliar with what’s going on. What led to his resignation, and what could this mean for the future?

According to folks on the ground in WA, there was a faction who secured a large proxy vote to block the Society hiring more staff which would take some of the load off the Spiritual Directors. This was an issue at the last AGM too. This was live streamed. The AGM may have been streamed this year too.

I have asked that members are sent minutes ASAP

Yeah I really don’t blame him then. I imagine he has enough on his plate as is as abbot and whathaveyou

This is good news for us all, but maybe a bit difficult for those involved with managing the organization.

Best of luck to us all! 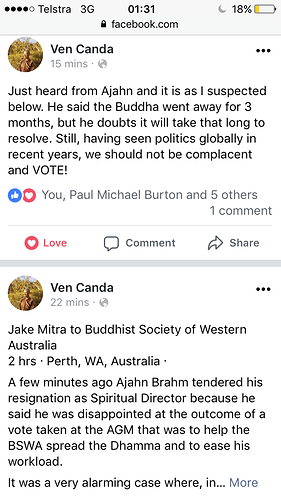 Verse 227. There Is No One Who Is Not Blamed

An ancient saying, Atula,
not only said today -
‘They are blamed who silent sit,
who often speak they too are blamed,
and blamed are they of measured speech’ -
there’s none in the world unblamed.

Explanation: O’ Atula, This has been said in the olden days too - it is not just for today. They blame the person who remains silent. They find fault with the person who talks too much. Even with the individual who speaks in moderation, they find fault. In this world there is no one who is not blamed.

Why AB need more paid professional staff?
When you have paid staff the organisation become more bureaucratic and lead to curruptions.

Dear Member I wish to inform you that at tonight's Society Annual General Meeting, Ajahn Brahmavamso resigned, without notice, from his post as Spiritual D

When you have paid staff the organisation become more bureaucratic and lead to curruptions.

Can you support that claim?

At which level does the corruption creep-in? How many paid staff are there, what is being asked for?

Without “hard” evidence any comments (including mine) are just speculations

You may be confusing his role as Abbot of Bodhinyana Monastery and Committee Member of BSWA. 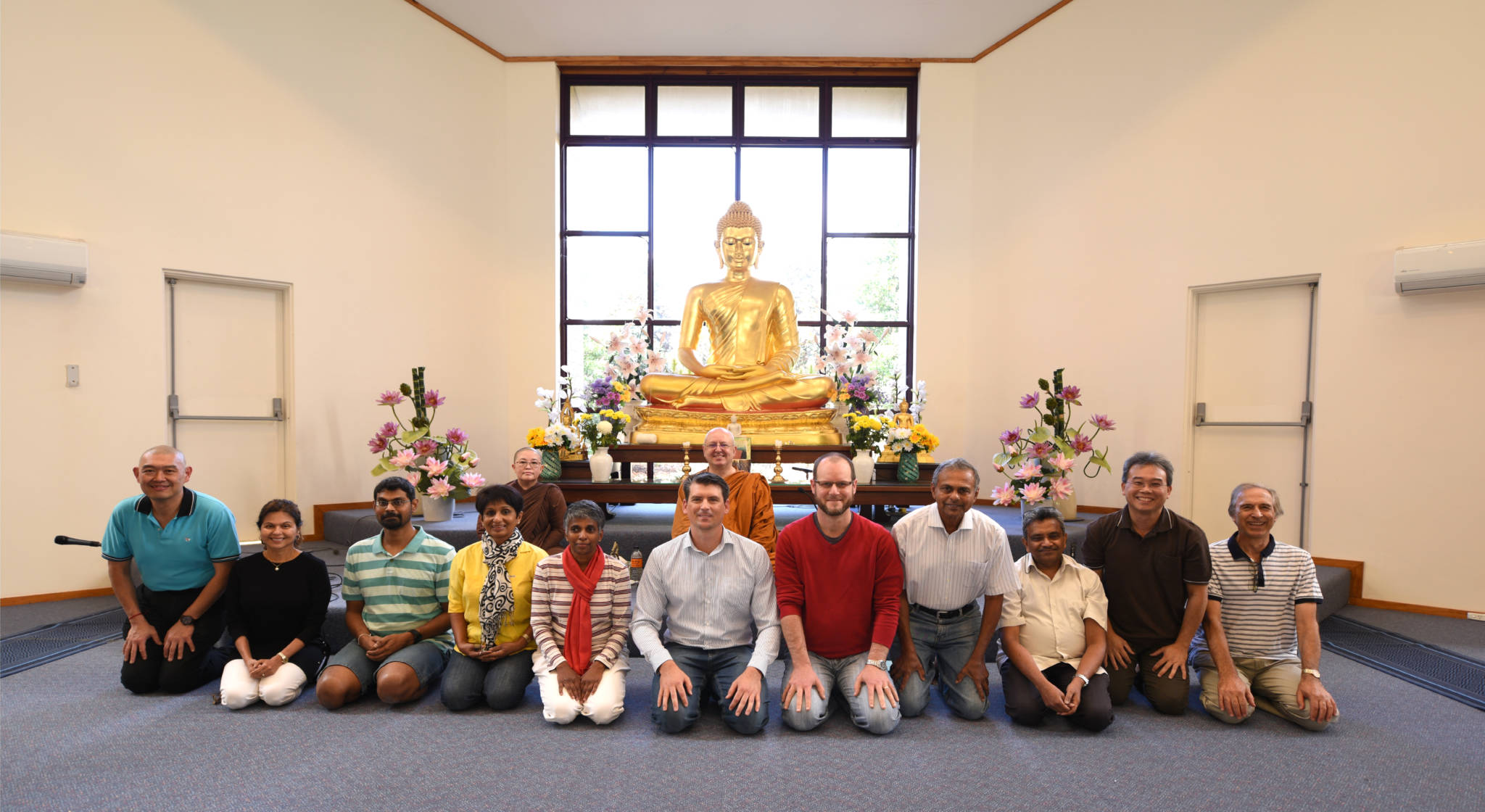 I believe monks should have no money, hear no money, see no money, and speak no money. And not have employees. Devoted lay people should work from the sweat of their brow with visible fruits of their labor (crops/building/clothing/medicine) and provide those to family, charity, and monastics. Am I being too naive? Please enlighten me.

Without “hard” evidence any comments (including mine) are just speculations

Agree this is just a general comment.
I understand some times a fully dedicated professional staff should be employed. But it is always better to run a Buddhist organisation with volunteers.

But it is always better to run a Buddhist organisation with volunteers.

I think I can understand and sympathize with your point, but why?

Creating more opportunities for laypeople to align themselves closely to right livelihood is a great thing, isn’t it?

Further, having previously given (and very, very gladly so) almost two years of my life to full- to not insignificant part-time (depending on the given project stage) volunteer service on a particular project, I do lean towards feeling it’s just a skewed, puritanical notion to think all Buddhist work done by people who live with all the regular life demands (food, shelter and such) should be done for free. Indeed, I think there can be something quite beautiful (and thoroughly Buddhist) by recognising basic material realities/needs and letting someone meet them with wholesome activity.

For myself, I always have and will very happily give/n away my time, but don’t really get what feels to me a little like misplaced judgementalism. It’s against this backdrop that I’m sincerely interested to know why you think Buddhist organisations should be run exclusively/mostly by volunteers?

Access to the link is blocked. It may be only for members of the FB Group?

I’m a member of the BSWA and happened to look at the minutes from 2017. There was at that time a Question submitted, that couched the issue in terms of the BSWA moving from what the writer called a “Dana-based” organization into a “corporate” model. The issue at that time was the proposal to hire a paid professional manager to manage both the facilities (the physical property) along with Admin management. It seems to me that the scope of the work would be to relieve Ajahn Brahm from being a business executive/COO for a large organization, and free him to be a teacher, mentor and Abbot along with spiritual director in the fullest sense.

An organization of the size of BSWA does need professional management. It’s silly to think of the BSWA as somethin akin to a small forest wat in a small rural village. The BSWA, credit to Ajahn Brahm and others, is a major presence in world Buddhism, and an important resource for many looking for good monks and nuns, and lay folks, that practice the Dhamma of the Buddha. I became a life member of BSWA some years ago as a way to thank the Ajahns there and to provide a small measure of support. I’m not a member of any other organization in this way.

As I am just one of thousands, this speaks to the reach and influence of the BSWA. It is somehwat ridiculous, IMO, to expect that Ajahn Brahm can continue to be shouldered with the responsibilites of management of an organization better suited to a professional business manager. One analogy might be that of towns that have a volunteer fire department, and towns that make the investment in a full time professional firefighting department. Volunter firepeople are just that; they have other jobs during the day, and might be in the pub or the shower when the three alarm fire alarm sounds. A professional fire department is dedicated and on call 24/7; they are focused on the task at hand. The financial investment in having a professional staff is important, once a town, or an organization becomes big enough and significant enough.

So the idea of having a “Dana-based” management system sounds Buddhist and it sounds pragmatic, but like the all volunteer fire department, it isn’t a sound or reasonable approach. Just as having a paid fire department or police force doesn’t make a town “corporate,” having a paid COO for the BSWA just makes sense, and frees up Ajahn Brahm and others to focus on what they ordained to do, which is to tend to the spiritual training of monastics and lay people, and leave the Excel and Quickbooks to a paid manager.

As long as there is available funding, it should be okay for all parties. An excellent teacher is priceless …

That’s exactly why they should have a professional administrator instead of expecting a monk to do it.

Actually, in Australia the Country Fire Authority, is a volunteer organisation. It operates very well! But the current belief/trend that volunteers can’t do the job as well as paid staff is erroneous.

It is just about finding the right skills needed. If you have both the competence, and capacity to devote time then there is no difference in quality of services. I would argue though that having members provide the service can actually do a better job, because they believe in what they are doing - the committment is much higher.

However, and this is the big thing, if there are NO Volunteers with the appropriate competencies, THEN one must go to paid options. It is not viable - as is evidenced by Ajahns resignation - to simply not fulfil the tasks required.

@Aminah I agree with your point about assisting people to be able to earn right livelihood. Even if is is a low wage, if it enables the right person to devote the time necessary, it is a very good system.