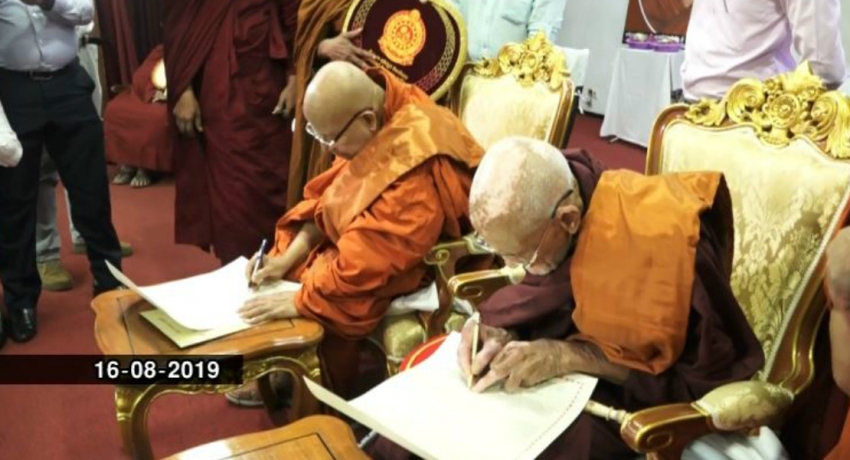 COLOMBO (News 1st):- In a historic decision, the Chief Prelates of the Amarapura and Ramanna sects have reached an agreement to combine the two sects. - Get the latest breaking news and top stories from Sri Lanka, the latest political news, sports...

Wonder if anyone knows anything about this. I realize that the nikayas are not an EBT thing, but still, folks might be interested.

For those who don’t know, The nikayas in Sri Lanka are connected to caste, with Siam Nikaya reserved for high caste.

For those who don’t know, The nikayas in Sri Lanka are connected to caste, with Siam Nikaya reserved for high caste.

I thought only Siam nikaya was caste-specific.

This is very good news!

A chapter (Latin: capitulum or capitellum) is one of several bodies of clergy in Roman Catholic, Old Catholic, Anglican, and Nordic Lutheran churches or their gatherings. The name derives from the habit of convening monks or canons for the reading of a chapter of the Bible or a heading of the order's rule. The 6th-century St Benedict directed that his monks begin their daily assemblies with such readings and over time expressions such as "coming together for the chapter" (convenire ad capitu...

I think the word “order” would be more appropriate. I think chapter is used for individual communities, whereas nikayas are large and encompass hundreds of communities. Generally, although one nikaya may have a historical relationship with one from another country, they are really specific to a country.

That connection does extend, though, to when monks go to start/live in communities abroad. So in a large city there may be temples belonging to different nikayas, although often temples are spit-offs from each other. Then they would all be part of the same nikaya.

As far as I know in Thailand and Sri Lanka there are no differences in terms of doctrine (unless you consider Dhammakaya as a nikaya) although some nikayas may have more ascetic/vinaya practices.

I think the word “order” would be more appropriate. I think chapter is used for individual communities, whereas nikayas are large and encompass hundreds of communities. Generally, although one nikaya may have a historical relationship with one from another country, they are really specific to a country.

I recall some theory of another that the “textual” nikāyā, so-to-speak, namely Dīghanikāya, Saṁyuttanikāya, etc., as preserved by or originating in different grounds of (sects of?) memorizers and reciters. I recall reading it here once bandied about but I cannot for the life of me remember where on this forum I read it. I think it might have had something to do with the theory that the Dīghanikāya was a collection of scriptures of the purposes of converted Brahmins, which I think Ven Bodhi is a cautious adherent of, if I remember correctly.

That might have something to do with this usage of nikāya, unless it definitely doesn’t.

If that’s the case then there are some parallels with the concept of Christian chapter I pointed above.

As far as I know none of the modern nikayas have anything to do with the groups of bhanaka monks established after the time of the Buddha. And as I said in the OP, nikayas don’t appear in the Pali EBTs.

Here is the business of Ven Bodhi, Dīghanikāya, and Brahmins:

The “Long” Discourses (Pali digha = “long”) consists of 34 suttas, including the longest ones in the Canon. The subject matter of these suttas ranges widely, from colorful folkloric accounts of the beings inhabiting the deva worlds (DN 20) to down-to-earth practical meditation instructions (DN 22), and everything in between. Recent scholarship suggests that a distinguishing trait of the Digha Nikaya may be that it was "intended for the purpose of propaganda, to attract converts to the new religion."1

But that’s nothing to do with the notion that specific groups of people developed/safeguarded specific textual nikāyā.

Does anyone know what the main and key differences are between the Siam, Amarapura and Ramayana Nikayas are? All I can find is that they have different historical origins (Thailand, vs Burma).

What are the differences between these sects on the ground? What are the issues that divide them?

I don’t know too much about it. But both the Amarapura and Ramanya nikayas are 'reform" sects stemming from the Myanmar Kalyani Sima lineage, which makes them essentially the same as the Thai Dhammayuttika. I’m not really sure what the difference between the two Sri Lankan lineages is, but in any case, the very welcome news of the merger suggests that there’s not much difference at all.

The Siam nikaya, based on a Thai lineage, is more comparable to the Thai Mahanikaya. How knows what the origins of the lineage are, but these days they are the group who ordain according to caste. On the whole, they are said to have laxer Vinaya, though like I said, I don’t really know much about it.

But the unification of two major nikayas is a historic event, and the best news I’ve heard from Sri Lankan Buddhism in a while!

I tried looking into this but did not find that much more info. All i can find is that there is a lot of issue over the whole caste thing, which is truly ridiculous, as the Buddha was clearly against caste. Nevertheless, here is what I found that is relevant. 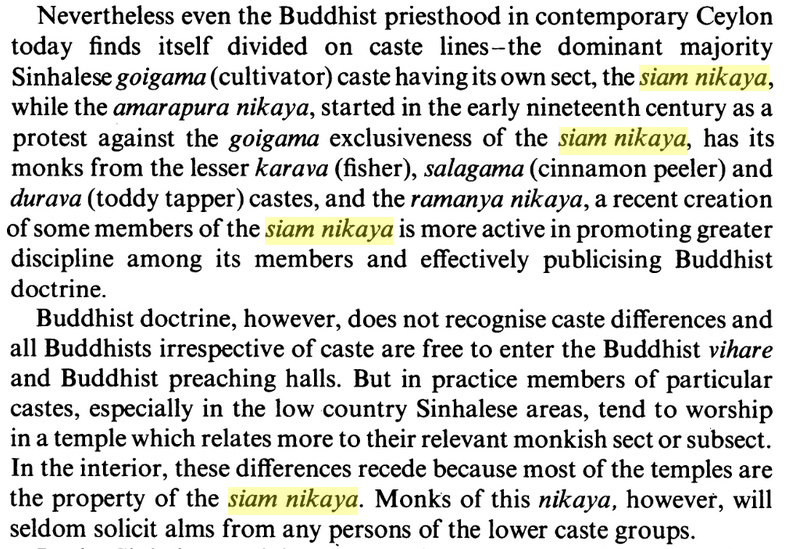 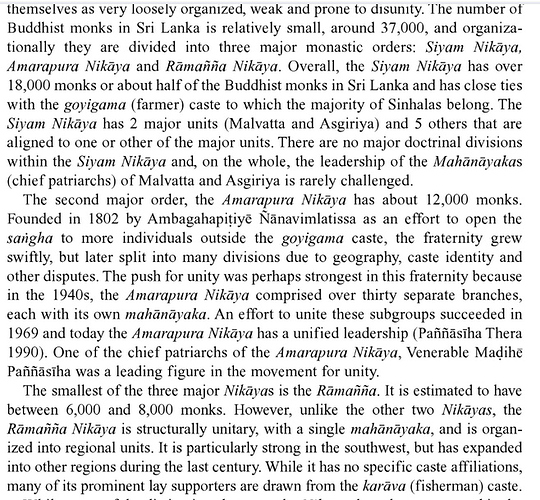 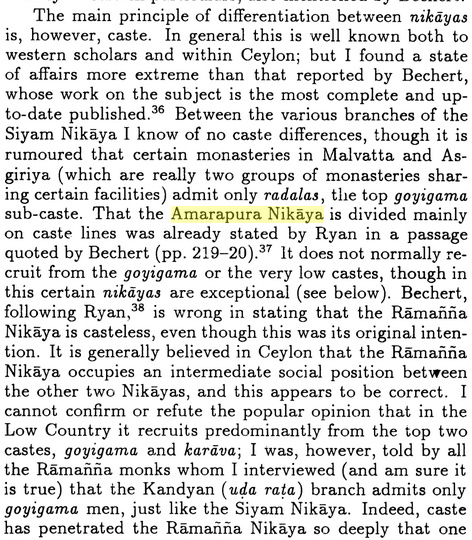 Interesting. Why are the majority Nikayas in Sri Lanka descended from non-sinhala lineages? Were the native lineages defunct or extinct?

War, colonialism, decline, and so forth. It happened various times throughout Sri Lankan history that the Sangha lost all bhikkhus so that a quorum of 5 bhikkhus could not be found and had to be imported from Burma or Thailand (these lineages are themselves derived from Sri Lanka though, so its the same Mahavihara lineage).

Because of this, the Theravada Sangha’s earlier efforts of spreading the Dharma to Southeast Asia payed off more than once since they were able to revive their own tradition from these lineages.

these lineages are themselves derived from Sri Lanka though, so its the same Mahavihara lineage

This is not necessarily true, in fact I believe it is unlikely.

Throughout the SE Asian region from some time after Ashoka there were different forms of Buddhism. As one might expect, they mostly stemmed from the northern part of India, arriving via Bangladesh or by sea across the bay. The Mulasarvastivadins seem to have been prominent, but the schools would have been mixed.

After the collapse of Buddhism in India, the region rallied around the supposedly “pure” Theravada of Sri Lanka. Missionaries from Myanmar received ordination in the Mahavihara lineage at Kelaniya. the story of this is told in the Kalyani Sima inscriptions. It is from this lineage that the “reformist” movements of the Ramannya, Amarapura, and Thai Dhammayuttika stem.

However, despite the efforts of the reformers, there is no reason to think that the pre-existing movements were ever entirely converted. In Thailand, there were and are a multitude of lineages in different regions: Thailand is a big country. No doubt these traditions came into Thailand at different times and in different ways. One would imagine, for example, that Buddhism of Southern Thailand shared a lot in common with the Buddhism of Malaysia, perhaps also Khmer, and would have arrived by sea; the heavy Hindu influence in this region attests to a frequent interaction with India. In the northern Lanna region (modern Chiang Mai), the tradition would have arrived more slowly over land via Bangladesh and Myanmar. Local differences still attest to these histories, notably the worship of the northern Mulasarvastivada arahant Upagupta in the northern regions.

Thus the traditional Thai lineages are not really coherent or well-defined. The same would have been true for Myanmar as well. And this is what prompted both of these countries to seek “purification” via the supposedly well-attested lineage of the Mahavihara. Only when the reformist movements took hold did the pre-existing movements take on a unitary identity, being called the Mahanikaya in Thailand or the Siam nikaya in Sri Lanka.

The narrative of “pure” lineages needs to be taken with a massive tablespoon of salt. It stems only from the propaganda texts of the lineages themselves, which were obviously concerned to establish their own superiority over others. It does not take much insight to realize that in religion, when you see people making aggressive claims to some external standard of “purity”, there is usually something to hide. Genuinely pure practitioners don’t spend their lives creating narratives about how pure they are. They just get on with it.

Thanks for the clarification Bhante, things are always more chaotic on the ground than the usual narratives.

Aha: lineage - tho there will be different views on the historical lines or authenticity of such lineages. (A chapter of monks is contemporaneous and can’t span generations as an order or liineage does.) Sect was not a good guess.