My good Sangha friend Ven Ānandajoti has just completed yet another project, an edition and translation of the Dharma Sangraha. The text is mostly a list of doctrinal terms, with a mixture of old and new terminology. It’s useful as a source of Sanskritic forms of doctrinal terms. As with all the best things in life, it’s free.

I read the F. Max Muller introduction and his touching description of the original manuscript translator, Ven. Kenjiu Kasawara.

As to his character, all I can say is that, though I watched him for a long time, I never found any guile in him, and I
doubt whether, during the last four years, Oxford possessed a purer and nobler soul among
her students than this poor Buddhist priest. Buddhism may indeed be proud of such a man.

Only a year after Kasawara returned to Japan, he died.

But I know that after he had left, he paced for a long time up and down the
road, looking again and again at my house, where, as he told me, he had passed the happiest
hours of his life. Yet we had done so little for him. Once only, in his last letter, he
complained of his loneliness in his own country. “To a sick man,” he wrote, “very few
remain as friends.” Soon after writing this he died, and the funeral ceremonies were
performed at Tokio on the 18th of July, 1883.

I know, it was beautiful, wasn’t it? There was something very touching about that story.

After a bit of Googling, and matching some Chinese characters with Google translate, I found a photo of Max Muller, and his student Kasahara Kenju < (on the right) It just seems right that we have an image of this young man to consider on SC. 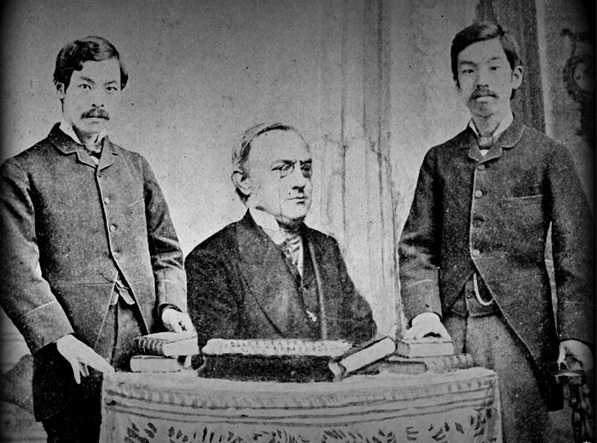