Animals with self view?

Does the animals such as birds & snakes conceive the five aggregates as “self” or generate “self-views” of “beings” ?

I think at some rudimentary level many of them do, whether or not they have any kind of developed self-concept. They surely distinguish their own territory and possessions from external territory, are attached to things they possess, and are anxious to defend their territory against encroachments. When my dog looks out the window and sees a neighbor dog peeing on a corner of his territory, or digging in a place where he buried a bone, he seems to experience distress.

I think they definitely do - like DKervick said, they are territorial and clingy. They do not regard feelings as mere conditions arising and ceasing, they take them personally and act on them. Of course, most animals (dolphins, as an example, could be an exception) do not have sophisticated language, so they probably don’t go around thinking verbal thoughts beginning with “I am…” “I want…” etc…which to me indicates that self-view, even for human beings, functions at a deeper level than conscious thought. I think this is why we actually need meditation, and cannot “reason” our way to enlightenment.

Whether animals or humans , self view is inherent in the nature . No one and no any other being has been born “enlightened” ! Ever !
Each and everyone, every being born in ignorant state . Isn’t that a kind of " miracle " !

Well I think it’s possible some very simple animals have no view at all - just a mechanical program.

Amoeba ?
So, being protective and
self view is the same thing ?

Except for Stream enterers++ - who are born with a degree of enlightenment. I wonder if it is possible to become fully enlightened in the womb?

I know there are people born psychic , can read others mind .

Does the animals such as birds & snakes conceive the five aggregates as “self” or generate “self-views” of “beings” ?

There is a sutta (I cannot find it now) where the Buddha rebukes a Bhikkhu for saying that a newborn doesn’t have Self-view. If we think of early stages of a baby’s life as being similar to that of other animals adult stage, we probably could apply the same principles and say that at their level of intelligence there must be a simplistic sense of self there, afaik.

My dog (border collie) clearly understands language and negotiation to the level of a two year old.

He can be stubborn and jealous. He understands concepts to do with time and has discernment both as to what are his possessions and what belongs to different humans is excellent.

Many animals display a level of emotional intelligence. My chickens would welcome me home. Now I haven’t lived with them in a year they’re not at all excited by the sound of my car pulling up.

My cat Anabelle behaves like a moody teenager. She stays in bed all day, is awake all night making noise, only comes out of her room when she hears me pouring food into her bowl, & I’m always cleaning after her (she sheds fur all over the place like the plague!) And she’ll only let me pet her when she feels like it!

She better be grateful for the Pali chanting she hears from me while brushing her!

Hopefully that’ll help her earn some merit & be reborn as a person in her next lifetime.

She’s one lucky spoiled cat (and let me tell you, she knows!) 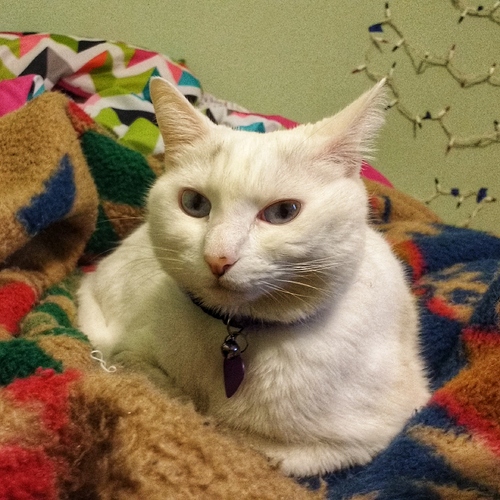 Well there are always stories like the following, from Jukani Wildlife Sanctuary:

The big majority of animals and human babies do not have self view. Only about 5 animals are known to have self-view.

Recently I saved a turtle which was crossing the highway road and was almost run over by a trailer. Since there weren’t any forest nearby my areas , I took the little guy/gurl home . Now, every day I will have to buy some morning glory (vegetable) to feed that fellow .

How could you ever prove such a thing? The stuff about mirrors and self-recognition doesn’t count, because that is only a very specific type of self view. There are 20 kinds of sakkaya dithi, only four of which relate to the physical body.

https://www.wired.com/2013/12/secret-language-of-plants/ This documentary on plants communicating, cooperating, competing, may be relevant, or interesting.

A search on animals and empathy is also likely to show interesting research, as well as reframing of animal behaviors, as showing capacity for empathy, and even altruism or generosity against self interest. For example, some animals refuse unequal rewards (cucumber vs grapes) for the same tasks. Bonobos, who ressemble but are now considered a distinct species from chimpanzees, show interesting capabilities for empathy, and even language acquisition. But there are also videos on youtube of predatory mammals, and some non mammals, showing mercy or altruistic behaviors… Those are perhaps annecdotal, as the details of the situations and beings’ histories are unknown. But as there are also videos of pet and wild fish (and an eel) cuddling human “friends” with evident enjoyment, I hesitate to dismiss the possibilities of any life for some self awareness.

I remember that Ajahn Brahm, in one of his talks, talked about levels of consciousness in living beings. Even in the case of consciousness entering a fetus - basically the point of transformation from a biological process to a ‘being’. This is of fundamental importance when considering how to navigate Samsara. As in the above example, it provides the grounds for decisions like abortion, what constitutes ‘killing’, and a way to understand consequences. eg where taking the life of a human is ‘worse’ than taking the life of a mosquito. It also provides a congruent basis for dependent origination, and why it takes so long to get to a position where one is capable of attaining Nibbana

In applying this view over the past year or two, I find that it rings true, and assists in living according to Dharma.