Anniversary of the first recital of Bhikkhuni patimokkha in USA

Today is Ayya Tathāloka’s 25th anniversary of higher ordination and as it turns out the anniversary of the first recital of the Bhikkhuni patimokkha in the USA, which was organised by our forum’s good friend Ayya Sudhamma @Charlotteannun from the Charlotte Buddhist Vihara.

Below is Ayya Tathāloka’s message and a link to a 2011 publication about the event, which I had never seen before so thought to share it here.

So, today is not only my 25th Bhikkhunī Ordination anniversary, it is also the anniversary of the formal demarcation of the presence of the Theravāda Bhikkhunī Sangha in North American 15 years ago, on Nov 22nd, 2007.

This just happened to occur on my 10-year Anniversary of Bhikkhunī Upasampada. What a great boon, boost and encouragement that was for us all.

Friend Roseanne Freese, on the editorial board for the Alliance for Bhikkhunis’ late great magazine “Present,” wrote this excellent article about it, “Turning Back Towards Freedom,”* a play on words on one of the commentarial definitions of “Pātimokkha” - the name of our Bhikkhu and Bhikkhunī monastic precepts.

This was 15 years ago, and if you look at the article, you’ll see it was back when i still used the Thai-style “Tathaaloka” or “Tathāālokā” spelling of my monastic name given by my venerable bhikkhunī mentor at the time of pabbajjā: Tathā+ālokā = 如光. Over the next 10 years, our senior Sri Lankan bhikkhu mentors advised repeatedly that the two long ā’s in the center should be combined - so, respecting their advice, I updated it. I share Roseanne’s article with you here, for anyone who may be interested.

We did one more great thing together at this time together at the Carolina Buddhist Vihara; we had a North American Bhikkhuni Association (NABA) meeting. NABA, now since 2019 updated to TBANA (Theravada Bhikkhuni Association of North America, aka “to Nibbāna”), was founded in the year 2004, the year Theravāda bhikkhunīs numbering 5 or more were recognized to be present in the US. A bunch of us came back from Asia in 2003-2004, including me. One of our founding NABA initiatives was to get together for Bhikkhunī Pātimokkha Recitation. We managed to do this for the first time three years later, with Venerable Bhikkhunī Peliyagoda Sudarshana Mahātherī from Sri Lanka offering the recitation.
During our 2007 NABA meeting, we also decided to collectively continue to support and work towards more our founding 5-year goals:

I’m really so appreciative to remember all these groundbreaking bhikkhunīs’ individual and collective dedication and support at that time together, and for these initiatives, which were successful, and such a great boon for us. These verses of the Buddha arise to mind again and again:

…
Turning Back Towards Freedom
November 2007: The First Recitation of the
Bhikkhuni Patimokkha within the Theravada
Bhikkhuni Lineage in North America
by Roseanne Freese 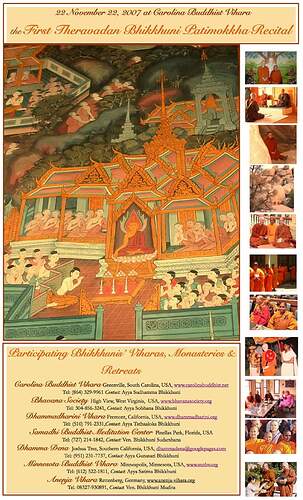 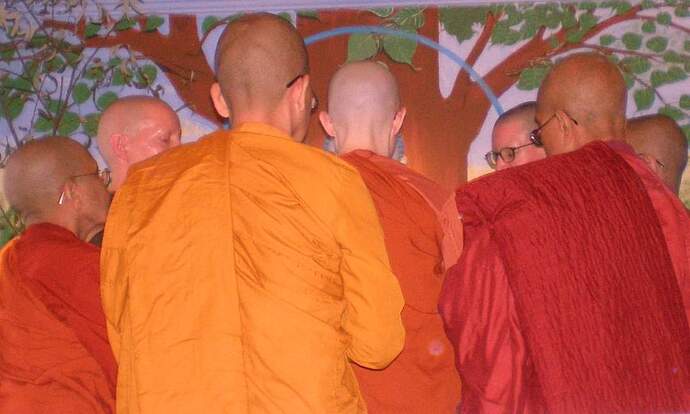 Wow, absolutely fantastic! Mega merit to everyone who helped make this happen all those years ago and ever since. Buddhism is strong when the four-fold assembly is strong