Hmmm, does it mean the 10 fetters version found in Pali canon is an advanced doctrinal development?

They do , you might want to take a look at it . Both have a mixed versions .

何 等為正定？謂住心不亂、堅固、攝持、寂止、三 昧、一心。
What is right concentration? That is abiding with unperplexed mind, firm, focus, with tranquility, samadhi, one pointness [of mind]

As I point out before, if the ascetics have right view and one pointness of mind, then yes they have right concentration.

What is right concentration? That is abiding with unperplexed mind, firm, focus, with tranquility, samadhi, one pointness [of mind]

I have pretty much steered my mind away from equating samadhi with concentration. When I see samadhi I conceptualize it as something more like what Venerable Sujato’s presents in his essay on defining samadhi:

Samādhi is both a gathering and a fire Essays

As is well known, the Pali term jhāyati, better known in noun form as jhāna, draws upon two distinct roots, which take the same form in Pali. The two roots are to “burn, glow, illuminate” and to “consider, ponder, ruminate”. It seems that the term samādhi, which is usually synonymous with jhāna in the EBTs, also draws on dual roots. This seems so obvious that I am surprised that I am surprised; probably someone has written about this; heck, I’ve probably done it myself! The PTS dict acknowledg…

I have pretty much steered my mind away from equating samadhi with concentration .

We can’t really do that when we translate Agama passages that actually say it means concentration, though. When it’s described as focused, unified, undistracted, and one-pointed, it’s difficult to avoid the conclusion that concentration is pretty close to what it means. On the other hand, there’s passages that drop these definitions, like the Madhyama passage @gene is bringing up. In those cases, samadhi has essentially lost that meaning and become an synonym for dhyana. I’m not sure, myself, whether that’s the older meaning. It’s seems to be the more overwrought texts that turn samadhi into another word for dhyana.

On the other hand, there’s passages that drop these definitions, like the Madhyama passage

MA 31 defines right samadhi as abiding in jhana (in singular, means meditation in general), where Bhikkhu Analayo translated it as jhanas (in plural) to indicate 4 jhanas, but it’s proved not quite correct here:

Yes, that’s the way I read it as well, and I wasn’t aware of this controversy re: Analayo’s translation. It’s to me another example of how he and other academics who come from the Theravada perspective force Pali-like readings onto the Agamas.

Just poking in to say thank you for this conversation! So many Theravadins all the time are like, “Pali texts are the most reliable and authoritative because they’re the oldest” and I’m like:

Look on the bright side: a decade or two ago, almost no-one had even heard of the Agamas. The only reason Theravadins can even have an opinion about the Agamas is because there are those who took an interest.

there are those who took an interest.

Very true. And, it’s natural to stick to one’s own canon, and classical Chinese bedevils everyone who tries to translate it. It’s amazing how easy it is to read it as we’d like it to read because it leaves so much to the reader to decide.

And I found what Bhante @sujato wrote years ago, which I have read it but I forgot it, this is the answer of question “why we bother studying the Chinese Agamas?” raised in this topic:

Perhaps an­other rea­son for the rel­a­tive ne­glect of the Āgamas is their very close­ness to the Nikāyas. We have to go to a lot of ef­fort to dis­cover what we think we know al­ready: the core Buddhist teach­ings re­ally are the four no­ble truths, the eight­fold path, de­pen­dent orig­i­na­tion, and so on. Although there are oc­ca­sional in­struc­tive vari­a­tions, the main fruit of this study is not in the con­tent of the teach­ing, but in the method. Rather than as­sum­ing that the scrip­tures of just one school are the first and last word on what the Buddha taught, we are search­ing in the root teach­ings shared in com­mon be­tween the schools. Such an ap­proach will not only help us to get ‘back to the Buddha’, but it will pro­vide the best plat­form for an im­proved un­der­stand­ing be­tween the Buddhist schools we find alive to­day.

I started out this es­say by crit­i­ciz­ing ‘Pali fun­da­men­tal­ism’; but we must also be­ware of be­com­ing ‘pre-sectarian’ fun­da­men­tal­ists! The teach­ings of the var­i­ous schools are not just a sheer mass of er­ror and mean­ing­less cor­rup­tion, any more than they are iron-clad for­mu­la­tions of ‘ul­ti­mate truth’. They are the an­swers given by teach­ers of old to the ques­tion: ‘What does Buddhism mean for us?’ Each suc­ceed­ing gen­er­a­tion must un­der­take the del­i­cate task of hermeneu­tics, the re-acculturation of the Dhamma in time and place. And in our times, so dif­fer­ent from those of any Buddhist era or cul­ture of the past, we must find our own an­swers. Looked at from this per­spec­tive, the teach­ings of the schools of­fer us in­valu­able lessons, a wealth of prece­dent be­queathed us by our an­ces­tors in faith. Just as the great Theravādin com­men­ta­tor Buddhaghosa em­ployed an en­cy­clopaedic knowl­edge of the Nikāyas, many of the great­est ‘Mahāyāna’ schol­ars, such as Nāgārjuna, Vasubandhu, and Asaṅga, based them­selves se­curely on the Āgamas. By fol­low­ing their ex­am­ple and mak­ing the ef­fort to thor­oughly learn these Teachings we can un­der­stand, prac­tice, and prop­a­gate the liv­ing Dhamma for the sake of all sen­tient be­ings.

What the Buddha Really Taught – Santipada

Last night I read Kuan’s Legends and Transcendence: Sectarian Affiliations of the Ekottarika Āgama in Chinese Translation, and it reminded me of how much we owe to the translations that exist in Chinese. Being able to compare the different sectarian vinayas, as one good example, makes it clear just how much sharing and cross-sectarian influence must have taken place in the ancient Buddhist world. The firewall that the Theravada seem have built to pretend that never happened aside, Buddhists were really very open about what constituted the “Buddha’s teaching” as they struggled to maintain it as best they could.

Whilst the age of the Pali suttas and the aṭṭhakathā is attractive and does add some weight to their authority, that isn’t the only reason for accepting them. Personally, for me, it’s because all I see outside of the Mahāvihāra is a tragic lapse into heresy.

Mahavihara (Mahāvihāra) is the Sanskrit and Pali term for a great vihara (Buddhist monastery) and is used to describe a monastic complex of viharas. A range of monasteries grew up in ancient Magadha (modern Bihar) and Bengal. According to Tibetan sources, five great mahaviharas stood out during the Pāla period: Vikramashila, the premier university of the era; Nalanda, past its prime but still illustrious, Somapura, Odantapurā, and Jaggadala. The five monasteries formed a network; "all of them we...

My simple strategy having failed, please would you mind expanding your use of ‘Mahāvihāra’ for the general readers of this site?

Sorry, yes. By Mahāvihāra I was refering to the Anuradhapura Maha Viharaya, the old centre of Theravādin orthodoxy. Mahāvihāravasin (Dwellers in the Great Monastery) being another name for Theravāda. By saying I see doctrinal error outside of the Mahāvihāra what I mean is that all of the other early schools bar Theravāda adopted what I consider to be anti-Dhamma views. Another way of putting it would be that only Theravāda remained true to the Buddha’s word. 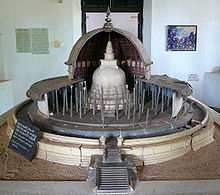 The Anuradhapura Maha Viharaya was an important mahavihara or large Buddhist monastery for Theravada Buddhism in Sri Lanka. King Devanampiya Tissa of Anuradhapura (247–207 BCE) founded it in his capital city of Anuradhapura. Monks such as Buddhaghosa (4th to 5th century CE) and Dhammapala, who wrote commentaries on the Tipitaka and texts such as the Visuddhimagga, which are central to Theravada Buddhist doctrine, established Theravada Mahaviharan orthodoxy here. Monks living at the Mahavihara In...

I think this is out of topic, please @moderators to split it into new topic because the topic is not to discuss whether Theravadin is the one and only true Buddhist sect and others are corrupted.

Ceisiwr was answering a question posed by Gillian as to the use of a specific term in a prior post. If discussion veers away from the original question we can revisit a possible topic split.

Personally, for me, it’s because all I see outside of the Mahāvihāra is a tragic lapse into heresy.

The Vaibhasika heresiologist Venerable Saṅghabhadra is like your mirror-image oppositely. He takes the separatist Vibhajyavādins to task in ways they never really succeed in responding to, it seems.