Hello, I want to ask something about Yakkha… Is Yakkha a Deva? Or Peta?

The term yakkha can denote quite a variety of creatures. In the Upālisutta, MN56 even the Buddha is praised for being one!

The entry for the word in G.P. Malalasekera’s Dictionary of Pali Proper Names would probably be a good place to start.

It seems that the most common sense in the EBTs is “mighty spirit”. I started out translating it something like “ogre”. But the majority of uses in the EBTs are either positive or neutral. It seems yakkhas were, like many deities, regarding as powerful and capricious, and neither innately good or bad.

Early statues of yakkhas, for example at Mathura, bear this out. They are depicted as mighty figures, strong and graceful, not as distorted ogres. Here’s Manibhadra:

That’s not to say they were never malevolent. They certainly could be, hence the need to placate them with offerings. And from early times, it seems, such offerings included human sacrifice, even child sacrifice. One of the Buddha’s great contributions to Indic culture was the almost complete elimination of such extreme cruel practices.

In later days their ferocious aspect came to be more emphasized, although they still served as Dhamma protectors. 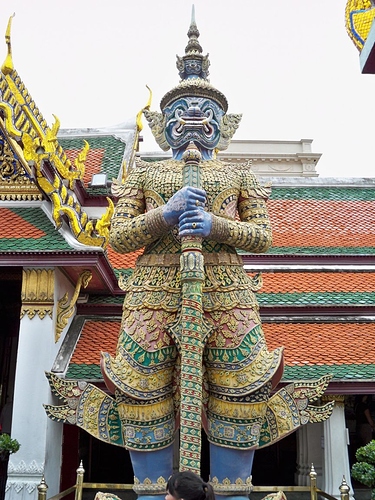 Though I doubt about it, but I am more convinced if yakkha is a Deva…