Ayya Yeshe and her work in the slums

Sometimes it is just good to reflect on how good we really have it. Ayya Yeshe does enormously good work in the slums of India and today her newsletter featured a powerful and heartbreaking story of a young girl called Noor that I want to share with you here.

Noor - From Child Bride to Child Activist and Lawyer

A Story of Overcoming All the Odds

Hello my name is Noor, it means jewel. In India, women don’t start their stories like that, with just their name. They start their story in relation to who they are the mother, daughter or wife of. That is because of patriarchy. A woman is only someone in relation to someone else. But it is also because our community is very close. It can be loving and supportive, but it can also be oppressive. I am a woman who wanted to tell my own story. I am a woman who wanted to hear my own name, without being someone’s wife or daughter, I dreamed of achieving things on my own and having my own identity. 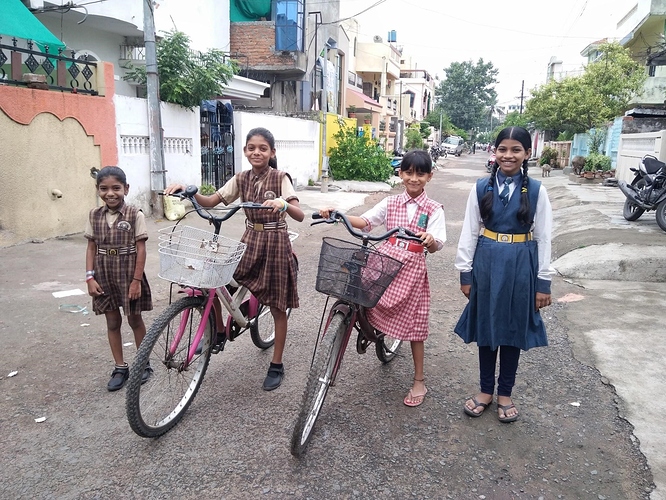 I was married at 13 in a remote village in Maharashtra - that is central India. In my village there was a water shortage. There had been a drought for many years and the animals were dying. The government sent us water trucks to fill our pots. A lot of the time the water was not very good for drinking and some of our children also died. The men went off to Dubai or other middle Eastern Countries for work and the women stay home. I am the fifth daughter in a Muslim family. After me our family finally had a son. My poor brother has to face the burden of marrying off 5 girls.

At 13 I was married off as the second wife of a much older man. He was away most of the time, but his first wife, who was around 45 beat me terribly and emotionally tortured me. The man I was married to forced me to have sex with him. It hurt so much and I screamed out. I had no idea what this big fat man was doing to me, but it hurt terribly. I screamed but no one came.

The other wife just told me it was my job to do this for our husband now, as after four children, she was tired. I was given sweet food after my husband raped me, but the sweet food did not erase the foul taste of his mouth on mine. I knew that somehow what had happened to me was not right, that instead of holding the first wife’s babies, I should still be going to school and playing with dolls. But I was a poor girl, and what rights do poor girls have?

We are seen as a burden, and the work we do like cooking and raising up the human race and bringing life is not paid or respected as equal to mans work, because they earn the money they have all the power.

At the age of 14 I became pregnant. I felt very hungry all the time, but still the first wife made me do all the work and carry heavy pots of water. I would see girls my age going off to school and I felt so jealous. At night after my husband forced himself on me I would secretly cry. Who cared about me?

My mother was under the control of my father, and they were both brainwashed by religion and culture. I was like a prisoner in the house. I could not go outside, except to the mosque now and then. Finally when I came to my fifth month of pregnancy I had a miscarriage. It was so painful, and I did not know what was happening until I saw my baby in the toilet. It was dead. I was so sad after that. I was still a child. Why should I be forced to carry this man’s children? I determined that I would run away.

My school teacher back in the larger city near my old school helped me. He helped me contact a Mumbai based organisation that rescued child brides. I went to the Mumbai charity. I was so scared that my husband’s relatives would find me and kill me. I found a job in a shop with the help of the charity and I stayed in a hostel for women at night. I could not say to anyone that I had been married. They would have thought that was very strange. They all wore jeans and were very modern.

I started studying from home to complete my high school certificate. I loved it. I especially loved writing and history, as well as science. Many years passed, I aged out of the charity for young women. It was really hard going out on my own. I finally finished high school and I got good marks. I admit that I worked a bit as a sex worker to pay rent, because even sharing a room with three other girls was not enough to pay the high rent of Mumbai. I had a nice boyfriend and he asked me to marry him, but I just couldn’t trust men any more. I did not want to be dependent on anyone.

I was looking for a way that I could go to university and a friend told me about Bodhicitta Foundation. I decided to study to be a social worker. This year after two and a half years at Bodhicitta Foundation girls home, I became a social worker and got a job with an NGO that protects children from abuse. I am so happy. I don’t want any children to have to go through what I went through. I am so happy every time we rescue a girl from child marriage or young girls and boys from predatory mafia dons.

There is a way back from abuse. There is a way to heal ourselves, and part of that is to create justice in the world and work for compassion. Abusers also need help, but it is much harder to overcome thousands of years of dysfunction culture that has men making all the decisions and not seeing women as equal human beings.

I am now studying part time to become a lawyer and work in child rights as well as doing work for the NGO. I want a lot of letters after my name and to have the power to make decisions to protect women and children and to make abusers understand that there are consequences for what they do.

I have fallen in love with another social worker. He is a feminist and a very kind man. It took a long time for me to trust him. We are engaged now. We will marry in a year or two. I think we will adopt children. India already has too many children that are not cared for.

So this is my story. This is how I became the hero of my own life. See, not all heroes have capes and wear their underwear on the outside! Some heroes are young girls escaping child marriage, or school teachers who help them, or people like yourselves who fund the charities that makes this work possible. So thank you for being my hero.

Without Bodhicitta Foundation and the people who fund it, I would still be trapped in a miserable child marriage. Without charities and social workers and people brave enough to help us take those first few steps and change society, we would remain trapped. I have so much reason to get up every day now… And none of it involves marital rape or domestic slavery. So thank you. Thank you for helping me reach my potential.

The newsletter you can find here:
https://mailchi.mp/98809cf7dd5d/bodhicitta-newsletter?fbclid=IwAR1eCeUBjdIEDr0eWGqQKfBuxdMk0RTjomRDfqgLOecrySl8lQgJE28uu58

“like” is certainly the wrong button to press for this. Sadhu to Ayya Yeshe and her work.

The tide of suffering is overwhelming and unending, and we keep trying to stem this tide.

Ayya Yeshe does great work with very limited resources. She is aiming to set up a monastery here in Australia but needs funds. The link below talks about acquiring land but I think she is now looking at renting a place.

It would be great if people can support her after all the support she has given others. Every small amount helps.

See our short Documentary about Ayya Yeshe and Women in Buddhism/ Social Engagement. Donate/ Contact us Find out how you can help Western monastics or transform lives through social work projec…