Bhante Sujato and Mindfulness Apps in the News

For those who are interested … The ABC (An Australian news site) has published an article about the usefulness of mindfulness meditation apps and has included a number of quotes from Bhante @sujato. The basis of the article was an online event presented by the Contemplative Studies Centre at the University of Melbourne Recorded on August 16, 2021. The Podcast of that event can be found here.

"If you went along to the Buddha and said, ‘Look, I’m going to die, I feel sick, I’m really stressed,’ the Buddha would say, ‘Yeah, that’s how life is, suck it up.’

“He wouldn’t say, ‘Have this mindful app and make it go away.’”

Yes @Gabriel_L … and there’s this one:

I presume they didn’t source the related illustration direct from Bhante. When I saw it I remarked that the pretty young woman looked less like a relaxed meditator than a model who’s trying too hard. 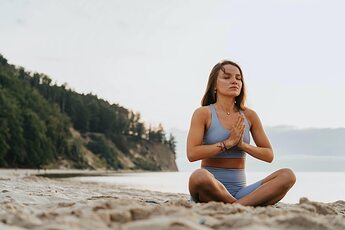 Seeing meditation simply as a tool for reducing stress, he says, predetermines the result.

“Whereas, as part of a spiritual path, it’s much more open,” he says.

"It’s much more like: How do I find freedom? How do I become a better person? How do I grow and fulfil my potential?

I just wish for every person who starts on meditation - for whatever reason - that he or she eventually finds the spiritual path through realising, that one over time, usually becomes a better person through meditation.
Often people start getting interested in “to know more” after they started with meditation.

For me personally, I couldn’t work with a meditation app.

“Everyone borrows from everyone else,” he says. “If there’s something in Buddhism which is useful for people, that’s great.”

So let’s spread the spirit of Buddhism and life like the catholic monk who said: “I live in a Buddhist Monastery because it makes me a better Christian”

I have not listened to the recording yet, but I have heard some teachers comment that in recent times a large number of people who turn up to sitting groups or retreats started out using apps. The teachers have had to adjust to this by doing a lot more in the way of guidance during meditation sessions than they used to…

That’s a change from what was being said some years ago, which was that the average age of meditation groups in western countries was steadily rising.

Beginners need guidance and I can imagine that it’s possible to become hooked on an app to the extent that meditation teachers need to adapt their introductions, but that wouldn’t be hugely difficult. … I share Bhante’s view that “If there’s something in Buddhism which is useful for people, that’s great.” … If people get a little help from a little device and they go looking for additional help, they’ll benefit additionally.