This booklet serves as a companion to a freely available online course, intended to offer a practical approach to the challenges of climate change that is grounded in the teachings of early Buddhism.

The .pdf version can be found here: https://www.buddhismuskunde.uni-hamburg.de/pdf/5-personen/analayo/climate.pdf

I have read the first chapter of Mindfully Facing Climate Change and I can highly recommend the book.

Update: starting from today you can sign up for the accompanying online course, which start in January: Mindfully Facing Climate Change

I’d like to provide a brief reflection. The book consists of four chapters and an appendix with meditation instructions. Each chapter corresponds with one of the noble truths, focuses either on (a) how the EBTs can inform climate change mitigation, or (b) on how contemplating climate change can aid the quest for liberation, and relates to a type of meditation explained in the appendix (see table).

The book features beautiful illustrations of episodes in the EBTs by Dido Dolmen such as the one below. 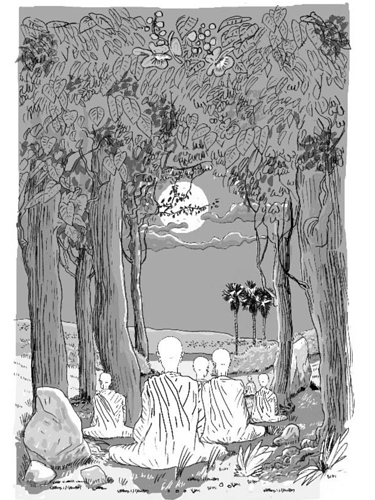 This sal forest at Gosiṅga is highly delightful, the night is brightly moonlit, and the sal trees are spreading a delicate fragrance, as if from divine flowers.

From MĀ 184, a parallel to the Mahāgosiṅga-sutta (MN 32) (I thank Ven @Khemarato.bhikkhu for providing me with the correct reference

The beauty of the moonlit forest, with the flowers in full bloom, leads on to a discussion on what particular spiritual quality could match this beauty. Each of the monastics present on this occasion describes one particularly praiseworthy quality, such as dwelling in seclusion, mastery of the mind, exemplary moral conduct, etc. In this way, the aesthetic dimension of the beauty of nature acquires its true significance from a soteriological perspective.

A passage I found especially inspiring (among many others) was Anālayo’s simile for the four divine abodes (sadly not illustrated, so I added some pictures by way of illustration

In what follows, I intend to round off the exploration in this chapter by illustrating the distinct quality of each divine abode, on the understanding that this is based on my own ideas and not something found explicitly in the early discourses. My illustration is based on the example of the sun, on the assumption that one is in a cool and stable climate where sunshine is experienced as something pleasant and agreeable, instead of being oppressive.

Here, mettā would be like the sun at midday in a cloudless sky, equally illuminating everyone and providing warmth in all directions. Just as the sun shines on what is high and low, clean and dirty, so mettā shines on all without making distinctions.

The sun keeps shining, regardless of how its rays are received. It does not shine more if people move out into the open to be warmed by its rays, nor does it shine less because people move back indoors. Similarly, mettā does not depend on reciprocation. Its rays of kindness shine on others out of an inner strength that pervades all bodily activities, words, and thoughts, without expecting anything in return. From the center of one’s being, mettā shines its rays on anyone encountered, just as from the midst of the sky the sun shines in all directions. 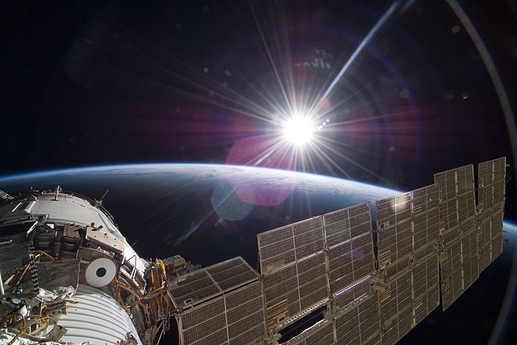 Compassion could be compared to the sun just before sunset. Darkness is close by, almost palpably close, yet the sun keeps shining. In fact, it shines all the more brilliantly, beautifully coloring the sky at sunset. Similarly, when face to face with suffering and affliction, the mental attitude of compassion shines even more brilliantly, undeterred by all the darkness found in the world. 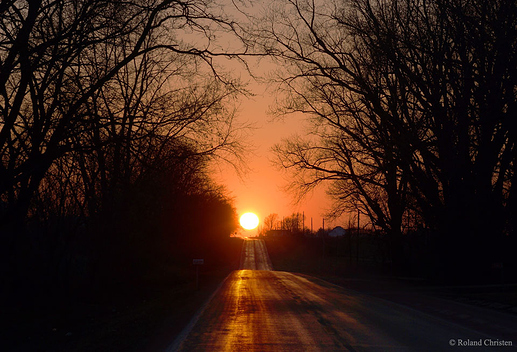 Continuing with the sun imagery, sympathetic joy could be compared to early morning sunrise. The birds are singing merrily, the air is fresh, and the surroundings are illuminated by the rising sun and appear as if pervaded by joyful delight. At times the rays of the sun touch a dewdrop on a flower or tree and break into a myriad of colors. In the same way, the manifestation of wholesome qualities can become the source of joyful rejoicings within oneself.

The fourth of the divine abodes, equanimity, could then be likened to the full moon on a cloudless night. Just as the sun and the moon are both up in the vast sky, in the same way the four divine abodes share with each other the boundless nature of a mind that has become limitless like the sky. The moon is not itself a source of sunlight, unlike the sun. At the same time, however, the moon does reflect the light of the sun, just as equanimity reflects within itself the positive disposition of the other three divine abodes. 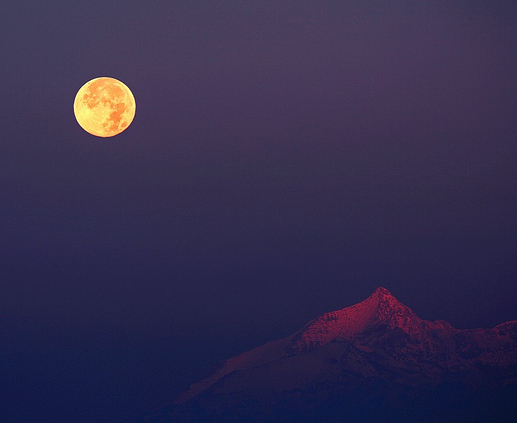 Thanks for that, @Robbie. I also found the book interesting and inspiring.

Ven Analayo said a little about the climate change issue in the last of his series of lectures on Bhikkhu Ñāṇananda’s Nibbana Sermons Bhikkhu Anālayo Lectures, so I was interested in comparing how they discussed some of the suttas.

[4. Walking the Path, Page 120]
Whereas in the previous chapters I tried to apply early Buddhist
teachings to climate change, in what follows I try to do the re-
verse, in the sense of showing that mindfully facing the conse-
quences of climate change can offer a substantial contribution to progress toward awakening. In this way, from having explored the environmental relevance of early Buddhism, I now
turn to the soteriological relevance of facing climate change.

For the purpose of establishing this perspective, I take up the Discourse on Seven Suns, [https://suttacentral.net/an7.66]
which describes a scenario much
worse than anything that could result from climate change: a
complete obliteration of the whole earth. In this discourse, the
vision of such total destruction serves as a means to drive
home the truth of impermanence and thereby lead onwards to awakening.

Now the Buddha has related the story of this great earth in some
discourses. But it is not an account of a scientific experiment, as our
modern day scientists would offer. The Buddha describes how this great
earth came up and how it gets destroyed in order to drive home into our
minds the impermanence of the very stage on which we enact our
samsāric drama, thereby inculcating an attitude of disenchantment and
dispassion, nibbidā and virāga.

These sankhāras, pertaining to our drama of existence on this gigantic
stage, the earth, get deeply imprinted in our minds. They sink deep as
latencies to perception, productive of existence. It is to eradicate them that
the Buddha has placed before us the story of this great earth in some
discourses. By far the best illustration comes in the Aggaññasutta of the Dīgha Nikāya. SuttaCentral
…

Billions and billions of years passed until the earth assumed its present
shape and appearance with all its gigantic mountains, rocks and buildings.
But then, in the Sattasuriyasutta of the Anguttara Nikāya,
[https://suttacentral.net/an7.66] the Buddha
describes what happens to this great earth at the end of the aeon.

As the holocaust draws near, a second orb of the sun appears, and then
a third, a fourth, a fifth, a sixth and a seventh. The great earth in its
entirety, together with its mountains and rocks, goes ablaze, becoming just
one huge flame of fire, consuming all before it without leaving any ash or
soot, like in a spot where oil or ghee had burnt. So here we have no room
for any atomism. In conclusion the Buddha brings out the true aim and
purpose of this discourse.

I had been struck by how, towards the end of the Nibbana Sermons, which often seem very inward-looking, Ven Ñāṇananda’s practical advice involved considering things

pertaining to our drama of existence on this gigantic stage, the earth…

Just one correction: the Sal Forest discourse in Pāli is MN32 (parallel to MA184)