Nothing in Bhikkhu Mokkhita’s life had prepared him for this. His monastery set afire, his name appearing on a blacklist and a manhunt underway, he was forced to urgently flee the peaceful community of his adopted rural homeland around Nyaungshwe, and take his chances getting through the numerous police checkpoints on the road to Yangon, and then find a way to pass undetected through the enhanced airport security blocking entry into a waiting Myanmar Airways International flight.

Back home now in Germany, Bhikkhu Mokkhita is left sorting out the trauma of his harrowing escape, and dealing with the fear of so many friends left there and now at risk. “I went from anger to fear,” he notes. “Emotions like a roller coaster. I’m just heartbroken to see this country that I love so much [this way].”

Bhikkhu Mokkhita’s roots in the Golden Land go back a long way. He first heard about Burma after taking a vipassana meditation course at Dhamma Dvara, a center in the tradition of S.N. Goenka. The experience changed his life, and he went on to attend over forty 10-day courses, as well as sit longer courses. Eventually, he decided that he wanted to delve into a deeper spiritual life than the Goenka course formats allow. So he went to Burma and began looking for monastic teachers. Eventually he left his marriage and medical career behind to ordain at Pa Auk monastery, and start a new chapter in his life.

After some very enriching years there, he found himself overwhelmed by the generosity of Burmese teachers and supporters, and wanted to find some way to give back. He was able to do just this by collecting donation funds from friends back home, and using them to build water wells, toilets, and school buildings at monasteries. This led to the establishment of his Muditā Foundation, and Bhikkhu Mokkhita became energized by what was possible.

The culmination of this work would find its acme in Nyaungshwe—made possible by the growing reforms of the democratically elected government—and his foundation was able to create a holistic living and education center providing free enrollment to anyone who wished to attend. The school was a symbiosis of East and West, incorporating such features as Buddhist meditation, yoga, gardening and cooking classes, adobe construction, and regularly bringing in teacher trainers to oversee their education and computer programs. Rather than being imposed, this outside knowledge was carefully integrated into a grassroots structure that also incorporated the most valuable aspects of traditional Burmese society. Listen here to our initial interview with Bhikkhu Mokkhita, recorded during the coronavirus pandemic.

But his dream was literally set on fire. Although he has no idea who ignited the actual blaze, Bhikkhu Mokkhita suspects it was someone connected to the military, as this gave them free reign to then accuse and arrest anyone they wanted for the arson. To make matters more complicated, Bhikkhu Mokkhita suspects the Sayadaw of the monastery as being complicit in the attack. Although his relationship with the abbot started out well, gradually he saw the Sayadaw beginning to eye what all those donations had come to provide: the 100 new computers, the classroom buildings, the student accommodations, etc. And perhaps, Bhikkhu Mokkhita thinks, the fire was part of a larger plan for him to claim those possessions for himself.

The fact that a monk was involved in the partial destruction and eventual takeover of the monastic school was devastating for Bhikkhu Mokkhita to process, and heightened his concern that the monastic role in the military coup needs to be held under greater scrutiny. Above all, Bhikkhu Mokkhita thinks it is imperative for those concerned about the current crisis to properly appreciate the immense power that monks have in Myanmar. “They’re very highly respected, as even the political leaders come and ask for advice, and certainly within the communities, the monks are always in the villages or cities and suburbs, they’re always leaders and have a very important leading role. What the monks say, often, the lay people will follow.” So what should the monks be saying at this moment?

From his own perspective as an ordained Buddhist monk, Bhikkhu Mokkhita believes there should be “a sense of responsibility of sharing these democratic values of freedom of speech, a freedom of choosing your life’s plan, or the partner that you’re living with, or the circumstances in your lives. And valuing this, these freedoms of mind, and the freedom of being free of torture, being free of the fear of being killed. So the monks should stand up, even when they don’t go demonstrating, then talking with their community about this and showing what’s right.” However in Bhikkhu Mokkhita’s estimation, this ethical stand is not being taken as strongly as he would like to see on behalf of the Saṅgha.

Although he is now living in physical safety back in Germany, his mind still suffers from experiencing loss, terror, and fear. Here his mindfulness training provides support, for example letting go of negative emotion to observe a fast heartbeat or sweating, which calms him down. But the sadness he feels at the senseless destruction of a generation’s forward progress can still seem overwhelming. For those who would like to support the former teachers who have lost their work, and in some cases, their home, please consider donating here.

He references a friend who commented that this young generation was like a young bird developing wings and taking its first steps towards flight. “And now there’s the military coming in, just breaking their wings and the whole future is lost for them! I totally understand that. If I were a Burmese youth, I will do exactly the same as them. There is nothing more to do than fighting until the end, for democracy. I totally get this now. Before there was trust and unity and openness, and now living in constant fear… they can drive the military truck out, they can just shoot you in the head any time, they can take you, detain you, torture you… anytime, to any person in the street, even a monk wearing the robes. So living in fear, constantly, is such a torture of mind, and takes away the life quality. And there are also many spies, you can’t really say your opinion any more openly. There’s mistrust among the people in the country, that’s also harming the society immensely.”

Listen to his podcast:

Quickly and easily listen to Insight Myanmar for free!

Source: Insight Myanmar
Insight Myanmar is a non profit organisation run by a good friend I met in Myanmar when I first ordained there in 2008. They are currently raising funds for oxygen for covid relief because there is a shortage on everything and Covid is running rampant.
More info on this is here: 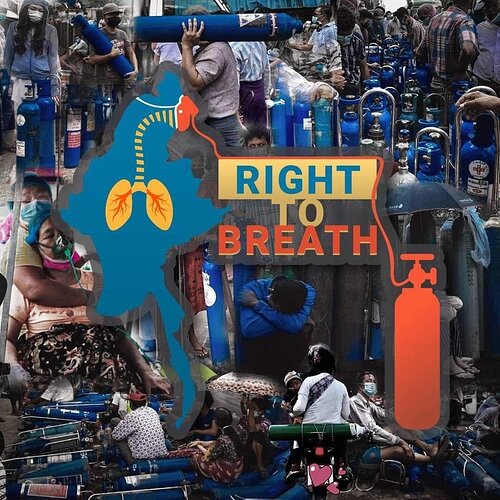 An emergency plea for help.

My friend from there wrote:

My eldest brother died of Covid last Thursday since we could not find enough oxygen and the mother of another member of our group died this morning, with the same problem. The military is blocking citizens to get oxygen. They arrest people - doctors, humanitarian workers who are helping sick people, who are helping to get oxygen. They close down oxygen plants from selling oxygen to citizen. Unimaginable things

Dear Ayya @Vimala, thank you so much for sharing this