The Voice team is compiling a list of Suttas that feature Bhikkhunis. This list will of course start out with the Therigatha and the Bhikkhuni Samyutta of the Samyutta Nikaya, but there are still many more.

We’d like to ask for your help to identify and add all Bhikkhuni Suttas to our list. What comes to mind so far is:

What else do we have? Your help is much appreciated!

@vimalanyani is the expert in this topic.

DN16 Mahāparinibbāna
• The bhikkhunī Nandā passes away at Nadikā; the Buddha declares her an anāgāminī.
• The Buddha had told Māra in the past that he wouldn’t pass away until he had bhikkhus, bhikkhunīs, upāsakas and upāsikās who were “accomplished, trained, skilled, learned, knowers of the Dhamma, trained in conformity with the Dhamma … etc.” Māra visits the Buddha to remind him of this and point out that he does now have such disciples.
• “Whatever bhikkhu, bhikkhunī, upāsaka or upāsikā dwells practising the Dhamma properly, and perfectly fulfils the Dhamma-way, he or she honours the Tathāgata, reveres and esteems him and pays him the supreme homage.”
• The benefits of bhikkhus, bhikkhunīs, upāsakas and upāsikās visiting the four saṃvejanīyaṭṭhānas.
• Ānanda praised for knowing when it’s the right time for bhikkhus, bhikkhunīs, upāsakas and upāsikās to visit the Tathāgata.
• The second of Ānanda’s four remarkable and wonderful qualities is that when bhikkhunīs come to visit him they are “pleased at the sight of him, and when Ananda talks Dhamma to them they are pleased, and when he is silent they are disappointed.”

DN28 Sampasādanīya
The discourse concludes with the Buddha telling Sāriputta that he should frequently tell bhikkhus, bhikkhunīs, upāsakas and upāsikās about its contents. “And any foolish people who have doubts or queries about the Tathāgata will, by listening to such talk, have their doubts and queries resolved.”

DN29 Pāsādika
"But, Cunda, if the holy life is so circumstanced, and there is no teacher who is senior, of long standing, long-ordained, mature and advanced in seniority, then in such a case the holy life will be imperfect. But if such a teacher exists, then the holy life can be perfected in such a case.
“If in such a case there is such a senior teacher, but if there are no senior disciples among the bhikkhus, who are experienced, trained, skilled, who have attained peace from bondage, who are able to proclaim the true Dhamma, able to refute any opposing doctrines that may arise by means of the true Dhamma, and, having done so, give a grounded exposition of Dhamma, then the holy life is not perfected.”
The second paragraph is then repeated, replacing “senior bhikkhus” with middle-standing bhikkhus, junior bhikkhus, senior bhikkhunīs, middle-standing bhikkhunīs, junior bhikkhunīs, upāsakas and upāsikās.

DN31 Lakkhaṇa
Seven of the thirty-two marks of the mahāpurisa relate to features of his relationship with the four assemblies: bhikkhus, bhikkhunīs, upāsakas and upāsikās.

DN33 Saṅgīti
The sixth of the nine inopportune times for living the brahmacariyā is being born in the border regions among foolish barbarians where there are no bhikkhus, bhikkhunīs, upāsakas or upāsikās.

I have fairly complete lists of all mentions of bhikkhunis / women in the early texts of the sutta pitaka. Let me know what you need, and I’ll PM it to you.

For starters, you definitely need the Khemasutta, SN 44.1, and the sutta that features the Kajangala bhikkhuni at AN 10.28.

This thread may also be of interest to you:

Inspiring bhikkhunis and laywomen in the EBTs - sutta quotes Discussion

A while ago, I promised Bhante @Dhammarakkhita and @Gabriel to post some inspiring quotes from my collection of suttas about bhikkhunis and women in general. It took a few weeks for me to get around to doing this, but here it comes. This is not intended to be a complete list of all instances of inspiring women. Just my personal favourites.

This thread is intended for quotes from EBT sources. There’s a lot of stuff in the commentaries, Apadanas etc, too, but if anyone is interested in tha…

Wow, this looks very comprehensive! Thank you! Although, as you can see below, we might not use all of them.

Sorry if I haven’t been clear enough in my OP.

those that mention them in a positive way

Yep! That’s what we’re after!

Thanks for asking these detailed questions.

What we have in mind is, in a future development, to put something like signposts that point to those Suttas that explicitly feature Bhikkhunis. Passing mentions of “bhikkhus and bhikkhunis” are not so much in our focus, nor are the references to the fourfold assembly—although this might be worth a “signpost topic” of its own. In this thread we’re interested in Suttas that speak of bhikkhunis in a more explicit way.

Khemasutta, SN 44.1, and the sutta that features the Kajangala bhikkhuni at AN 10.28

Very good, thanks! And I’ll also go through this other thread you mentioned.

This is fantastic, thank you so much for sharing. Yes, please PM it to me. I hope I have been specific enough now. If not—keep asking!

Thank you so much! Due to your suggestions, my list in the OP has grown considerably. I still included a few of the “four assembly” ones; will see what finally comes out of this.

One step on the Bhikkhuni path:

Try typing the word “nun” into the Voice search box. You will be shown search phrases that contain this word. Well, you’ll also be guided to the “pleasure of renunciation”, but that’s not necessarily a bad thing … 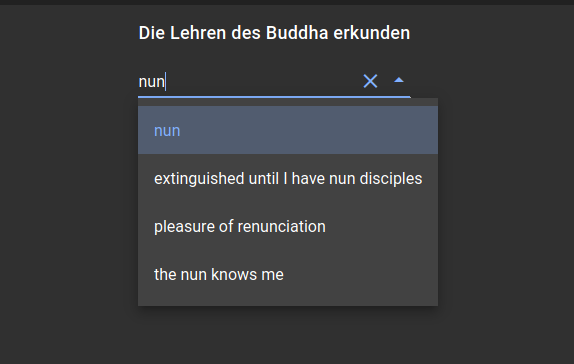 (Never mind that the website language is in German, that’s just a preference of the one who took the screen shot. If you set translation language to German too and type the word “Nonne” you will also get interesting results.)

My favorite is “the nun knows me”. Amusingly, Visākha in MN44 did not say that, but the Buddha essentially said it for him:

It would have been fun to meet these two…