Greetings,
I hope all is well with you. I am presently trying to estimate the potential influence of Sanskrit on the early transmission of Buddhist canonical material because Sanskritization is one of the mechanisms which are putatively responsible for having shaped Pāli into its present form. I vaguely remember some studies which were presenting the distribution of Brahmins and other members of society in percentage within the early saṅgha but can’t retrieve them or remember their outcomes. Do you happen to know of any such studies? Thank you and mettā 2u!

The following book might be of interest to you: https://www.amazon.com/Historical-Buddha-Teachings-Buddhism-Tradition/dp/8120818172

It can also (partly) be found on Google books: The Historical Buddha: The Times, Life, and Teachings of the Founder of Buddhism - Hans Wolfgang Schumann - Google Boeken

I found the following table in this book: 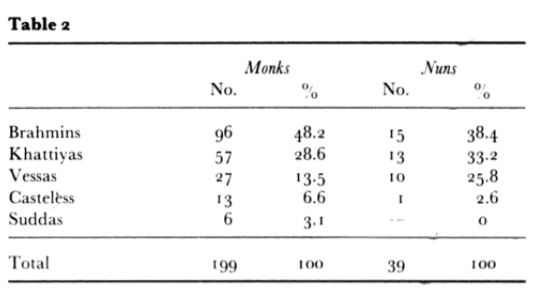 Perhaps I may share something in addition to what you posted earlier, to which in the meantime my attention was brought to recently elsewhere, perhaps of interest?

In the saṅgha, it was mentioned, it is around 40 %. It is important, though, not to assume that the brāhmaṇas mentioned had a background in the Vedic religion per se. It was said (by Bronkhorst and others) that it was more a thing of lineage or birth and so vast differences in religious outlook can exist parallel to that, for example of a Buddhist kind. So one would still be considered a brāhmaṇa when actually being a Buddhist. Compare the Buddha speaking to Aṅgulimāla: “Bear it, brahmin, bear it”, though surely he wasn’t engaged in fire worship or the like at that time … !