Note there seems to be some misunderstanding here, please see the clarification by the Buddhist heritage project below: Urgent Clean Water needed for Skin Disease Outbreak among Buddhist Novices

On our buddhism journey, we have have come across people from all walks of life and obtained lots of blessings and knowledge from them. During one of our conversations, which lead to a visit to Luang Prabang, Laos, we came across the plight of novices mainly hailing from the the poverty stricken mountainside villages.

The families of these novices send them to the Vat Pha-O School which was specially built to offer financially disadvantaged Laotian children a holistic environment for a chance at receiving education and inculcating proper values in life.

The establishment houses up to 1,000 Child novices aged between 10 to 20, and up to 70 monks and nuns during peak seasons.

The school is currently lacking in clean water, a basic amenity required for the personal hygiene of the inhabitants.

This lack, coupled with the cramped living conditions of the premises, has resulted in widespread skin conditions, which are transmitted easily due to the contagiousness of these diseases.

The novices have a hard time focusing on their hopes of improving their lives through education amidst living in such stressful conditions.

We are hoping to put we have learnt about giving back to society into practice, as well as to benefit the Sangha.

We sincerely hope to be able to raise the required funds to build a functional water treatment distribution system to better the lives of these children, and hope the community can help us out with this project as well.

Thanks for letting us know about this project, we hope it succeeds. Please keep us informed.

If I make make a couple of suggestions?

When I saw your post, my first inclination was to ask, “Who are these people”? “Are they legit?” It would really help if you could give us your name and details of your story to show that we should trust you.

Secondly, I’m not sure if you’re aware, but the Buddhist Library in Sydney has been working on exactly this kind of aid for many years now, primarily in Cambodia. Perhaps they would help out?

Thanks for your willingness to help and your invaulable suggestions. I have also approached the organisation in your link to seek for additional help, and hope they respond.

My name is Jonathan, and i am one of the leads for this project, and have personally went down to assess the situation in the area. I’ve actually prepared an EDM deck with more pictures and details, however new members aren’t allowed to post documents. I’d be happy to forward them to you if you require.

I did up the gogetfunding link with key information within it, as well as an overview, with the pictures of the situation. We have managed to raise some funds on our side privately, however, still have a way to go before achieving the desired amount to start work.

Hopefully more people can chip in to make a difference!

After investigation this reply has been received from Buddhist Heritage Project. Any donations should be made through them:

For the water situation at Vat Pa Pha-O and the Buddhist Academy, there is no emergency. We have been there, and spoken to some of the monks and novices, and in particular to the Abbot.

They have clean drinking water (and have for some years now thanks to us and some others). Water for bathing comes from variable sources depending on the season. About 3 years ago there was an outbreak of skin rashes etc., but given that it was never medically diagnosed it could have been anything. More likely it was something like bed lice or scabies or some such.

However at that time a visiting Swiss / Japanese monk (?) offered to raise money to build them a water treatment plant, but apparently nothing ever came of it. In fact that’s a very bad idea unless one also deals with the practical issues and costs of on-going maintenance etc. Those costs, in the long run, would be significant and probably more than the initial capital expense of building the plant.

There are approximately 600 novices in the lower secondary school, along with several dozen Monks, Nuns and support people. The very young novices are in the process of building a series of small “khutis” so they will no longer have to sleep dormitory style on the floor in the temple.

While it’s a lifestyle that many westerners would not find comfortable, the fact is that most of these kids are far better off here (and more comfortable) than at home in their remote villages. There is no overcrowding, and the ambience and environment is harmonious and cheerful.

There are many things to help them with, in particular at the moment (aside from building the Arts School) we are focusing on the challenge of solid waste disposal, and other more mundane matters.

I hope this helps to clear up the apparent mis-information (fake news?) that has been posted on your site. Our own website is long overdue for an update on the school construction, and I hope to get to that this coming month.

Thanks so much for the useful feedback and clarification. You are doing great work! I’m happy to hear the situation has improved. I know that myself, and others here, would be interested to learn of any future news or projects you have.

I’m the Swiss born Japanese Monk who initiated together with Buddhist practitioners of Singapore
headed by Kingsley Sok the campaign Urgent clean Water needed to collect donation for a Water Purification and distribution station in Vat Pa Pha-O, Luang Prabang Province. The included statement shall help to clarify the inaccurated information. An official Acknowledgment and Endorsement for the project signed by the abbot of Vat Pa Pha-O Sathu Nyai Onekeo shall show that the project is under his supervision and a real necessity.
Unfortunately I see that I’m not yet allowed to include documents. In this case, who ever is interested in the facts and truth can request the documents via e-mail: karuna2019.02@gmail.com. I hope that right thinking, right speech, right acting combined with compassion and generosity will help to realize this important project in short time. Please support this important project. Gasho: Gensou

This project has received the endorsement of Ven Sathou of the Vat Pha-O School, and i have attached the documents of his endorsement as well.

Please help support this cause, thank you! 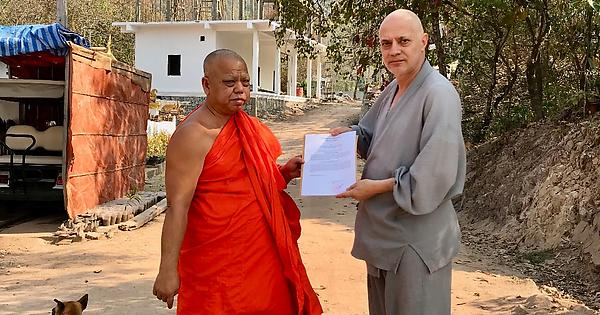 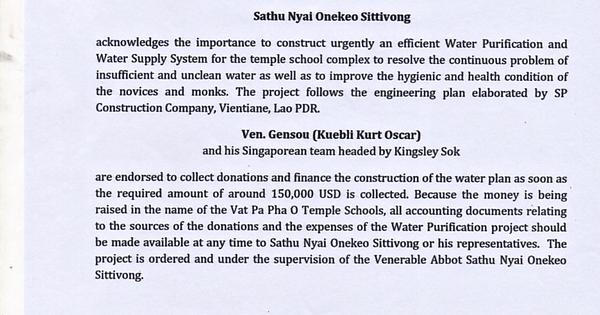 Buddhist Heritage Project have issued a clarifying statement:
Paul:
Yes – in circumstances outside my control, but against my recommendation, the Abbot of the Buddhist Academy and school has issued an authorisation to this man to raise $150,000 for a water filtration plant.

With regret I can’t say more than that.

I’m so surprised about this negative attitude for this project and for my person. Unfortunately we had never the chance to meet each other and become friends. We all work for the benefit of the Luang Prabang Sangha and especially help Sathu Onekeo to realize his project. May happiness and a peaceful mind to lead us to the success of our endeavors.

While I applaud your good intentions, it would have been better if you’d provided some way for members of this and other forums to verify that the project is genuine and also stuck around to answer any questions that might arise. On Dhamma Wheel, for example, you haven’t logged in since you posted your appeal a fortnight ago and all the members’ questions have been left unanswered. In the end concern that it might be a scam led one of the DW moderators to remove the link from your post.

The Buddhist Library conducts a Cambodian water tank project where concrete tanks are built to harvest rainwater, so as well as providing clean water it also creates industry. The rain in Luang Prabang will begin in April.
https://youraid.org.au/

Today I had time to see your water tank project in Cambodia and I like your idea. But for the Buddhist Monk School Vat Pa Pha-O we have to proceed with our project as planned. I wish your organization success and hope that many people will donate for your activities in Cambodia.

In fact I am not connected with the Buddhist Library project, but drew attention to it because I think it is the best solution, being simple and free of expensive running costs.

That’s right. Until now it was simple and the temple complex used groundwater
but more and more the water disappeared especially in dry season, which is theoretically from November to April. Regarding clean and segment free
water presented an other problem. That’s why the abbot is interested in a more elaborated system. The daily quantity of water consume for around 500 students as normal and in peak times (Vipassana) to around 800 to 1000 people is an other criterium for the decision for a more powerful system.
If you are interested in more details I can send you the documents by e-mail.
My e-mail address is: karuna2019.02@gmail.com

Have you contacted the Lao Red Cross and the ICRC?

This topic has been closed temporarily during moderator discussion.