I did a SC D&D search for “fiction” and only saw one post devoted to that, but it was specialized to science fiction ( Buddhist Science Fiction? ). I have recently enjoyed a couple of books that were retellings of stories from Buddhist scriptures, and arguably qualify as fiction. I could use a few more titles, especially e-books, for those times when sleep doesn’t come but I’m not up to reading suttas in the original. Please tell me what fiction you have enjoyed reading that is either directly Buddhist or Dhamma-compatible. (No need to duplicate entries from the Science Fiction post I think).

I would like to recommend “Mara and the Mangala” ( https://amaravati.org/dhamma-books/mara-and-mangala/ ) by Ajahn Amaro. This might be described as a retelling and elaboration of the story cycle of King Udena. I have yet to follow up with the original sutta sources or the companion novel “The Pilgrim Kamanita”, but it is on my to-do list.

Funny timing! I’m reading the new George Saunders book on Russian stories now after it was featured in Tricycle.

What a great idea for a thread! I look forward to seeing recommendations as this is something I find myself looking for quite often. I highly recommend ‘Siddharta’ by Hermann Hesse - beautifully written, very moving, I loved it. Also, ‘The Pilgrim Kamanita’ by Karl Gjellerup is a great read.

Not exactly fiction, but the Jatakas are certainly lighter reads than the suttas and they each contain a lesson to reflect on.

The most famous one:

Journey to the West.

Although contains some inaccuracy in regards to the Dhamma and mix in with Taoism, Confucianism, it’s largely quite good, including scenes where Xuan Zhang has to resist temptations of marriage offerings. We get to be reminded of the coolness of being a monk. And it’s interesting to see how many vinaya rules the 3 disciples breaks throughout the journey. And also Xuan Zhang himself broke quite a lot of rules. (Riding horse, eating after noon, drinking wine, torturing wu kong etc.)

The original is quite thick, but makes for a good daily reading. For 100 chapters, it can fill 3 months plus at 1 chapter per day or half that in 2 chapters per day. 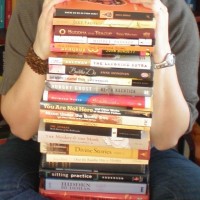 Light reading can be enlightening.

for those times when sleep doesn’t come

It is possible to meditate in the prone position. For older people it’s probably the main position. If it ends in sleep that’s not a problem as a lot can be achieved before that.

This isn’t fiction, but it is about stories: Great Disciples of the Buddha by Ven Nyanaponika Thera. It’s been my bedtime story for the past week or so. Much lighter read than the suttas, and it helps bring the suttas to life by giving you an idea of who all these people were.

Not exactly Buddhist, but not exactly not Buddhist: Roger Zelazny’s Lord of Light.

Often listed as one of the great science fiction novels, it tells of a future colony planet where the original settlers from earth monopolized technology, using it to gain immortality. They presented to ordinary folk as avatars of Hindu deities. Life was good for them, until one came along, Sam, who rejected their theocracy.

For his troubles, he was ejected to “Nirvana”, but was later pulled back by his followers to start another war. They recruited an army of native demons (rakshasa) and zombies (Christians, risen from the dead!) and declared war on heaven.

“Which one is the right way?"
“Huh? You’re asking me that? How should I know?”
“Mortals call you Buddha.”
"That is only because they are afflicted with language and ignorance.”

The Dharma is very much of its time—late 60s—but it’s surprisingly well-informed and always entertaining.

“Why could you not have left me as I was, in the sea of being?"

"Because the world has need of your humility, your piety, your great teaching and your Machiavellian scheming.”

Lord of Light (1967) is a science fantasy novel by American author Roger Zelazny. It was awarded the 1968 Hugo Award for Best Novel, and nominated for a Nebula Award in the same category. Two chapters from the novel were published as novelettes in the Magazine of Fantasy and Science Fiction – "Dawn" in April 1967, and "Death and the Executioner" in June 1967. The context of the novel – modern western characters in a Hindu-Buddhist-infused world – is reflected in the book's opening lines: His f...

Great topic! I also recently realized I could benefit from Dhamma related books that are fairly easy reads. To that end, I’ve sought out and found some good biographies and autobiographies. Although the ones below aren’t technically fiction, they read as easily as fiction.

The Life of Milarepa

Running Toward Mystery by Tenzin Priyadarshi.

Cave in the Snow

Lastly, this book is more from a Hindu perspective but includes some interesting accounts of deep samadhi, prolonged retreats, and other interesting topics related to the Dhamma is If Truth be Told, a Monks Memoir by Om Swami.

I read SHERLOCK HOLMES: THE MISSING YEARS
The Adventures of the Great Detective in India and Tibet
by Jamyang Norbu
some years ago. I read it in Spanish. I am not sure if the original language was English or Tibetan.
Having been in contact with Tibetan Buddhism and Tibetan people for some time, it was an entertaining reading for me.
I remember having read something along the lines that it was the first modern novel in Tibetan culture. I guess it’s have been written from the exile.

Please tell me what fiction you have enjoyed reading that is either directly Buddhist or Dhamma-compatible.

For “Dhamma Compatible” (especially in connection with mindfulness, sīla and the brahmavihāras) I would say most of Iris Murdoch’s twenty-five novels.

Desmonda Lawrence, Iris Murdoch and the Moral Dimensions of Literature

Silvia Panizza, The Importance of Attention in Morality: An exploration of Iris Murdoch’s philosophy

Wake Up by Jack Kerouac. Written in 1955 but not published till only a few years ago it’s not exactly a novel but rather Jack Kerouac’s version of the life of the Buddha. Possibly only of interest to those with an interest in Kerouac’s understanding of the dhamma/dharma. The copy I have has an intro by Robert Thurman.

The Dharma Bums, also by Kerouac, and first published in the late '50s, is an amusing and thought-provoking fictional account of the co-existence of the dhamma/dharma with a ‘decadent’ beatnik lifestyle. A bit of a precursor to the interest in ‘things Eastern’ that took off in the '60s and '70s. Possibly of no illuminating value to a serious Buddhist but nevertheless an amusing read. Perhaps of interest primarily as an artefact of the West Meets East phenomenon.

Jack was mostly influenced by Tibetan Buddhism. Some of his friends were drawn towards Zen (Gary Snyder for instance) but Jack found Zen too cold and austere. He thought there was more compassion in Vajrayana.

Towards the end of his life he reverted back to his original Catholicism. He died an alcoholic in 1969.

Wake Up by Jack Kerouac. Written in 1955 but not published till only a few years ago

I used to be a big fan of Kerouac. I think he might have been the one that introduced me to Buddhism. I haven’t heard of this book. Maybe I’ll check it out.

It’s worth a look. It’s written in a Kerouacian style.