Can anyone give me references to the Assaji-Sariputta encounter and the Ye dhamma hetuppabhava verse in the Chinese translations of the Tripitaka? Even just one would do!

I can’t read Chinese, but there is a Chinese translation of SN 56.11 on SC here (this is the other source of this verse, apart from the event of Assaji-Sariputta encounter on Khandaka of Vinaya Pitaka). The verse should be translated as 凡任何集法都是滅法 there.

I appreciate your help very much, but unfortunately this does not seem to
meet the bill. The Pali Dhammacakkappavatanasutta itself does not contain the
Assajī-Sāriputta encounter, nor the verse. In the Pali Tipiṭaka
this only occurs in the Vinaya, VI.40(PTS), if one does not count the
Apadāna or Peṭakopadesa as fully “canonical”. In a sense, it
is logical enough that it should occur in the Vinaya, in the account
of the early days of the development of the Saṅgha. One would have
rather expected an account of such a vital event, and such a famous
verse, in the Suttapiṭaka somewhere too though. I would be very
surprised if it was not in the Chinese translations somewhere, but I
have been unable to locate it. But then, my knowledge of Chinese is
little better than the ability to look up individual words in a
dictionary.

The Pali Dhammacakkappavatanasutta itself does not contain theAssajī-Sāriputta encounter, nor the verse.

May be @llt can help this…

This is not really relevant, but when I put together the early Buddhism course a few years ago with Ven Brahmali, I made a slide with a few different versions of this verse. None in Chinese, though, I suppose I couldn’t find it. (I probably didn’t look very hard!) 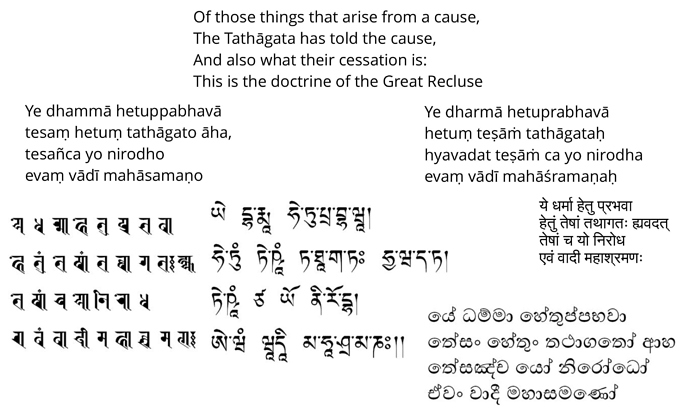