Causality is merely correspondence for which we have not found any exceptions—yet.

Or, as the Buddha put it:

See? Patterns only, not a “cause” to be seen.

"Fundamentally, there is no cause & effect. The universe evolves along lines that contain regularities and patterns than make certain kinds of events predictable when we know the conditions preceding them. We don’t know why.
But human beings, because of our developmental path, perceive the world in terms of a template based on the exertion of will through the application of mechanical force via our bodies.
For us, cause & effect seems like a natural and intuitive principle. From this we generalise to the principle of sufficient reason: things happen for a reason. But they don’t. Shit just happens.
(…)
"This is clearly bad news for those who deal in bullshit platitudes such as “trust the universe”, or “things happen for a reason”, or “God has a plan”. The universe evolves according to a logic of its own, that is deeply counter-intuitive to most people, i.e. causeless and aimless, but regular and (somewhat) predictable.
However, just because the universe has no purpose, doesn’t mean that human beings don’t. 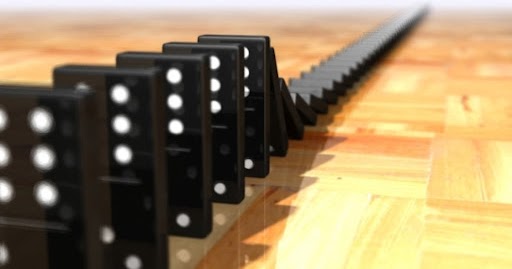 There is No Cause & Effect. 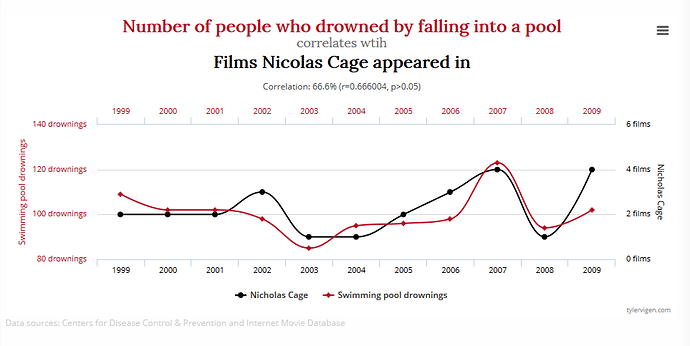 15 Insane Things That Correlate With Each Other

Why do these things correlate? These 15 correlations will blow your mind. (Is this headline sensationalist enough for you to click on it yet?)

I prefer to be a bit more cautious when talking about whether the causality truly exists. I agree 100% with you and Mr. Hume on the simple fact that the causality is inferred from observation, but I think it could possibly be wiser not to make any commitment to the ontological status of causality. Maybe it exists, maybe it doesn’t. It doesn’t matter, neither for practical purposes nor for spiritual ones. We can assume for all intents and purposes that it kind of does, and its ultimate ontological status is just totally irrelevant.

Magical thinking, a left over from residual godthink, assuming there is some hidden mechanism underlying the changes we can see.

Brilliantly said, sadhu, bhante! It has always been a huge enigma for me, how serious grown-up people can operate with notions like ‘energy’ or ‘field’, something that is very poorly defined, has a distinct archaic tinge, and most importantly is absolutely unobservable except for its results, whether they are movements of a detector or changes in the position or composition of observable bodies, so strictly speaking (their ultimate ontological status is again irrelevant) they should be regarded as descriptive mechanisms. As a kid, I just really couldn’t understand why anyone said ‘Oh, okay, gravitational force, I get it.’ I don’t get it, can someone please explain what the heck is a force?! It explains why I am more fond of the Humanities

Why do these things correlate?

Re cheese and bedsheets: in Thailand, the monks often say that eating cheese in the evening leads to more and vivid dreams, especially of a, shall we say, non-monastic nature. I have not heard of any of them strangling themselves to death as a result of this, but that may be just because we use little or no bedding. So: correlation or causation?

I think it could possibly be wiser not to make any commitment to the ontological status of causality. Maybe it exists, maybe it doesn’t. It doesn’t matter, neither for practical purposes nor for spiritual ones.

William of Ockham is calling, he has a razor for you …

It explains why I am more fond of the Humanities

I know, right? Much more rational!

William of Ockham is calling, he has a razor for you …

Well, I don’t know, because the ultimate Ockham razor must have ‘God did it’ engraved right across its blade. Besides, it seems just pointless to me to think about the truly ultimate supreme ontological status, I feel like the Buddha wouldn’t really approve the idea.

The point, I think, is that unless we point it out people will always fall back into a substantialist view.

The question came up on Quora some time ago, and there was a whole series of answers “explaining” how correlation wasn’t causality. I made a comment similar to that above. It was the only comment that did not just buy the orthodoxy. What was interesting to me was that it generated precisely zero responses. I think the way of thinking is so deeply ingrained, so fundamental to the materialist/rationalist mindset, that it other perspectives are just unthinkable.

It sounds like this is not where you’re at, though, so maybe it is irrelevant for you.

Well, I don’t know, because the ultimate Ockham razor must have ‘God did it’ engraved right across its blade.

It’s a good point, and it shows the limits of this heuristic. Then again, whether assuming “god did it” actually simplifies things or complicates them further is certainly up for debate. I take the latter position.

I think the discussion can be refined.

It depends on whether one insists that propositions on Causation must be derived a priori, or whether we can be satisfied with them being merely a posteriori.

This goes to the heart of Hume’s Fork. If one insists on the former, it is a synthetic a priori proposition. For Hume, it is meaningless.

If one is satisfied with the latter, it becomes a synthetic a posteriori, ie a probable proposition derived by Induction.

This is the crux of the problem with philosophers - the latter gives only probable outcomes, while philosophers crave the certainty of priori derivations (ie Deductions). Being unable to derive truths deductively (ie as Analytic a prioris ), they resort to Synthetic a prioris such as Causation.

At least in the English and American traditions of epistemology, they follow Hume’s lead in rejecting this.

Causation can be “true” in a scientific sense, ie as a synthetic a posteriori. It is only when we insist that it is true in an a priori fashion that we will have stepped into the realm of metaphysics.

DN 1 criticises some viewpoints that are synthetic a priori propositions. Can you spot them?

There is a way to interpret the 2nd and 3rd Noble Truths (ie This-That Conditionality) that Hume would approve as being valid Analytic a priori.

Hi,
When I shared the video I was more interested in the weird correlations the video spots and how it is not very honest to always assume correlation is pointing to causation. It was not my intention at all to start a debate between those who accept and those who refuse causation.

Then I shared the link to Jayarava’s interesting article which I once read and helped me allow for a more fuzzy model of the world in my head. With a less strict set of rules in regards to what I assume causes what, I have found myself able to experiment and investigate things further, especially when it comes to the cultivation of the path.

I just want to point out that even according to regularity theories of causation, where causation consists in nothing more than exceptionless patterns or regularities, it is still possible to distinguish deeper regularities from more superficial regularities that happen to supervene upon the former, and the scientific effort to distinguish the most fundamental causal patterns and sequences from more accidental observed correlations still make sense.

I forgot this is the Watercooler!

I read a lot of Alan Watts as a teenager. In one of his books-- I don’t remember which-- he wrote of a scene in which a cat walked by on the far side of a gapped wall. First you’d see the head, then the tail. His question was: did the head cause the tail? Aren’t many of our perceptions just like this, in which we think we see separate things that are actually not?

There is some discussion of regularity theories of causation in this article: