Anyone here who, like me, has gone from studying Pali to the rabbit hole of Indology at large may find this free online course interesting:

Early Vedic is the oldest attested Indo-Aryan language. Early Vedic is famous for its unique oral tradition (see introduction). Its importance for the reconstruction of Proto-Indo-European can hardly be overestimated. It is the only IE language preserving breathy voiced consonants, traditionally represented as voiced aspirated. Its sandhi phenomena allow for glimpses into prosodic structure quite unexpected for a dead language (see sounds). Vedic has an archaic and rich case system (see words) and a complex pattern of finite and infinite embedding (see structures).

Early Vedic (which I believe is also referred to as “Vedic Sanskrit”) is of course the language of the Vedas. As the diagram below shows, however, although Early Vedic is older than Sanskrit proper, it is nonetheless not a direct ancestor of Pali, more like an aunt or uncle! 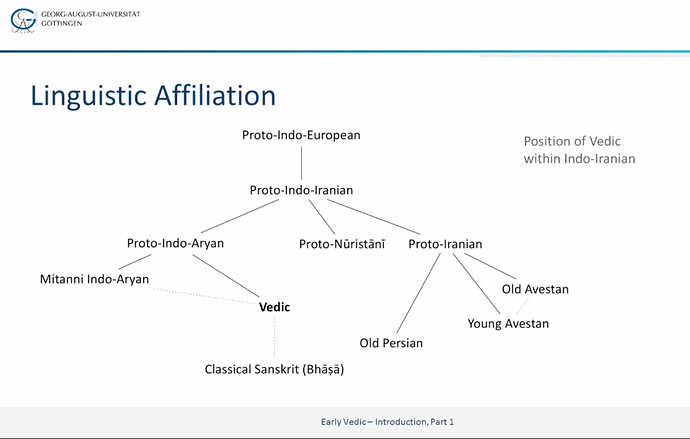 This quote (citing Thomas Oberlies’ grammar of Pali) from Wikipedia explains this a bit more (where Early Vedic is referred to by yet another term, ‘Ṛgvedic Sanskit’):

Pāḷi, as a Middle Indo-Aryan language, is different from Classical Sanskrit more with regard to its dialectal base than the time of its origin. A number of its morphological and lexical features show that it is not a direct continuation of Ṛgvedic Sanskrit. Instead it descends from one or more dialects that were, despite many similarities, different from Ṛgvedic.Wikipedia: Pali — Geographic Origin

Even though the language is obviously more associated with Hinduism than Buddhism, I find it very interesting to learn about both the sociolinguistics of Early Vedic as well as the structure of the language itself. (Certainly the bits on metrical theory are relevant to the study of Pali.)

Fantastic resource, thank you so much @khagga

Thank you for this!

The Tocharian course is also interesting from an EBT perspective. Tocharian manuscripts often have Buddhist content.

Oh wow, I had no idea. More fodder for my walks. Thanks @Danny!

Glad some folks have found this interesting! @Danny, I’ve spent all my free time since your comment looking up Tocharian. Amazing. One hears about the Silk Road but every time I pull back the curtain a bit it’s more amazing what a crossroads that part of the world was. So many languages, cultures, religions.

I enjoyed this brief but profusely illustrated overview of the languages of the area by J.P. Mallory:

Thank you for the article, seems like a good read!

I recently read The Buddhist Literature of Ancient Gandhara by Richard Salomon. I think you might also find it quite fascinating. It deals with the earliest Buddhist texts found on scrolls in the Prakrit language Gandhari (which is quite close to Pali).

Yes, Gandhari really is amazing. I have that book as well as Salomon’s book on the Rhinoceros Sutra, but I haven’t gotten around to reading either of them.

I’m curious (perhaps you know, @Danny?) what it was mentioned in the Tocharian course you linked that “Prakrit” was used in the same areas as Tocharian. Did they mean Gandharan Prakrit, or some other? I often find the term “Prakrit” difficult to interpret.