I just came across this article and downloaded the thesis. This will be of interest to many of us here, I think. The article tag-line (which usually is a bit over-the-top in such popular articles) is: “ The discovery makes it possible to translate any word written in Sanskrit.”
Here is the link to the article: Pānini’s Grammar

Genuinely cool breakthrough by a student! The original and better article is here: 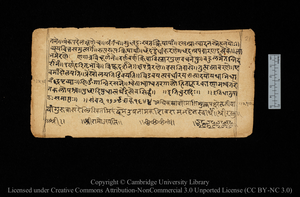 A grammatical problem which has defeated Sanskrit scholars since the 5th Century BC has finally been solved by an Indian PhD student at the University of Cambridge. Rishi Rajpopat made the breakthrough by decoding a rule taught by “the father of...

tl;dr: In Panani’s grammar, sometime multiple rules apply at the same time. There is a metarule to resolve such conflicts, but as traditionally interpreted it is error-prone. He proposes a new interpretation of the same rule that allows resolution of conflicts very simply with almost no errors.

Abstract from the Phd here:

If two rules are simultaneously applicable at a given step in a Pāṇinian derivation, which of the two should be applied? Put differently, in the event of a ‘conflict’ between the two rules, which rule wins? In the Aṣṭādhyāyī, Pāṇini has taught only one metarule, namely, 1.4.2 vipratiṣedhe paraṁ kāryam, to address this problem. Traditional scholars interpret it as follows: ‘in the event of a conflict between two rules of equal strength, the rule that comes later in the serial order of the Aṣṭādhyāyī, wins.’ Pāṇinīyas claim that if one rule is nitya, and its simultaneously applicable counterpart is anitya, or if one is antaraṅga and the other bahiraṅga, or if one is an apavāda (exception) and the other the utsarga (general rule), then the two rules are not equally strong and consequently, we cannot use 1.4.2 to resolve the conflict between them. The nitya, antaraṅga and apavāda rules are stronger than their respective counterparts and thus win against them. But this system of conflict resolution is far from perfect: the tradition has had to write numerous additional metarules to account for umpteen exceptions. In this thesis, I propose my own solution to the problem of rule conflict which I have developed by relying exclusively on Pāṇini’s Aṣṭādhyāyī. I replace the aforementioned traditional categories of rule conflict with a new classification, based on whether the two rules are applicable to the same operand (Same Operand Interaction, SOI), or to two different operands (Different Operand Interaction, DOI). I argue that, in case of SOI, the more specific i.e., the ‘exception’ rule, wins. Additionally, I develop a systematic method for the identification of the ‘more specific’ rule – based on Pāṇini’s style of rule composition. I also argue that, in order to deal with DOI, Pāṇini has composed 1.4.2, which I interpret as follows: ‘in case of DOI (vipratiṣedha), the right-hand side (para) operation (kārya) prevails.’ I support my conclusions with both textual and derivational evidence. I also discuss my interpretation of certain metarules teaching substitution and augmentation, the concept of aṅga, and the asiddha and asiddhavat rules and expound on not only their interaction with 1.4.2 but also their influence on the overall functioning of the Pāṇinian machine.

Among other things, this opens the path to a fully machine-generative grammar for Sanskrit (and Pali???)

Among other things, this opens the path to a fully machine-generative grammar for Sanskrit (and Pali???)

Agreed! I was also thinking along the same lines as the thesis explicitly refers to the resolved grammar rules as a “language machine”. I started reading the thesis and my first impressions are that this is a major breakthrough!
The article you liked is indeed much better with specific examples.
Cool! Very exciting for ancient language studies and NLP!

The discovery makes it possible to translate any word written in Sanskrit.

Just to clarify this, what the insight does not do is tell us what Sanskrit words mean, or even tell us what grammatical form they are. It tells us how their grammatical form can be derived from Panini’s rules. This might clear up a few difficult cases of interpretation, but it isn’t going to change the meaning of the vast majority of Sanskrit, which is perfectly well understood.

It is, however, testimony to the astonishing genius of Panini, whose grammar IMHO is the greatest worldly science produced in the ancient world, bar none.

Yes, I have no doubt folks will be taking this up. The battle between generative grammars and neural nets just got heated. May the best algorithm win!

It’s cool to see this story doing the rounds on mainstream media platforms! What a great boost for Mr Rajpopat.

in case of DOI (vipratiṣedha), the right-hand side (para) operation (kārya) prevails.

His decision to translate para in this context as ‘right-hand side’, as opposed to, say, ‘subsequent’ is interesting, given the assumed oral character of Panini’s work.

His decision to translate para in this context as ‘right-hand side’, as opposed to, say, ‘subsequent’ is interesting, given the assumed oral character of Panini’s work.

Good point, I wonder if he discusses it. Para does fit “subsequent” better.

Perhaps this is the reason later scholars misunderstood it in the first place.