Do the suttas support the idea of Svasaṃvedana (self awareness, reflexive awareness)?

I was recently listening to videos from a UC Berkeley conference on cognitive science and Buddhism.

See: https://youtu.be/rqWYeE2E07w
A transcript can be read here:

In the beginning lecture, Evan Thompson, a well known philosopher who draws on Indian thought, was defending the sautrantika Buddhist theory of svasaṃvedana on phenomenological grounds (apparently Western phenomenologists had similar ideas). The theory has been a long bone of contention among Buddhists; Madhyamikas and Theravadins seem to have argued against it, while Sautrantika and Yogacara argued for it and Sarvastivadins had a view somewhat in the middle.

It is the nature (svabhava) of awareness (jñana) and so forth to apprehend, thus awareness can apprehend itself as well as others. This is like a lamp that can illuminate itself and others owing to its nature of luminosity.

They held that this was not possible, but that consciousness could perceive previous moments of consciousness. Wikipedia says:

However that does not mean the Sarvastivadins reject all theories of self cognition, they developed their own theory which argued that mind moments know themselves only reflexively in regards to the previous mind moments. As Zhihua Yao states, “in other words, the mind knows itself through a reflection of the past mind”

Evan Thompson, in the lecture linked above (from min 48 onwards), mainly focuses on the views of Buddhist philosopher Dignaga (he wrongly says he introduced the concept, but we can see it already in the Kathavatthu), who also defended the idea of a non-conceptual “internal awareness of mental consciousness.” According to Thompson the basics of this view is that “every cognition has a twofold appearance, its object and itself.” He ties this with cognitive science theories of meta-cognition and meta-awareness, the fact that I can know that I am knowing. He says Dignaga holds that without this reflexive awareness, it is impossible to explain meta-cognition. The argument is:

Or as Birgit Kellner defines it “an immediate, non-conceptual mode of awareness that provides access to how mental content (including feelings, etc.) presents
itself subjectively.”

Ofhand, I can’t think of anything in the suttas that supports it. I suspect it’s one of those things that the Buddha would have located in the “thicket of views” that are unfit for attention, according to MN2.

The view seems to lead logically to an implausible and unsustainable regress.

He ties this with cognitive science theories of meta-cognition and meta-awareness, the fact that I can know that I am knowing.

I would imagine that if the suttas can support this idea, it would have to be some kind of viññana, maybe a mode of mano-viññana which is aware of itself or of its immediate past. I just don’t have the sutta knowledge to know if this is a possible interpretation or if it is ruled out by certain sutta passages.

If one considers meta- in the “level” sense. Then there is the following, which states the experience of infinite nothingness. (DN33).

And if that were not enough, the implication that sentience ceases (because the seventh plane is the highest level of sentient beings):

Presumably sentience implies reflexive awareness, so the dimension of neither perception nor non-perception, might be read as an explanation of meta-cognition without self-awareness of any sort.

This is inference. Not experience.

the sautrantika Buddhist theory of svasaṃvedana

It’s an interesting problem, and one that, I think, has no obvious answer directly from the suttas. I personally think that svasaṃvedana is not possible. What we do, rather, is become aware of the impressions, echoes, or memories of consciousnes. The classic simile is that one’s eyes cannot see themselves; they can only see their reflection.

The epistemological meaning of this is that insight must rely to some extent on inference, not just on direct awareness. This is necessary in any case, as, for example, one cannot “see” impermanence in the present; one can only see change over time; and since consciousness operates in the present, understanding impermanence is in fact an inference derived from memories of changes in consciousness.

I haven’t studied Dignaga in detail, so I’m not sure I can assess his argument, but I would not accept one of the posited assumptions for it: that consciousness has two aspects, the subjective and objective. Much of consciousness is, in fact, neither: that includes, for a start, all the things that go in the mind that make consciousness happen, but of which we are not aware. Things like, say, the defilements and ignorance, or even more neutral things such as contact or perception; they are there, doing their job, but we are not aware of them, nor are they awareness. Further, I would reject the idea of an “object” of mind in toto, but I couldn’t really say if this is assumed by Dignaga or by his interpreters.

This undermines the argument, as the difference between two instances of cognition may well lie neither in the subject nor that of which we are aware, but in the many other processes that operate at the same time, all influencing and supporting each other.

we can see it already in the Kathavatthu

Do you have a reference for that?

My source is Zhihua Yao’s “The Buddhist theory of self cognition”, she mentions the passages here:

Regarding the Andhakas in the Katthavatthu, one of their arguments was based on the following sutta quote: 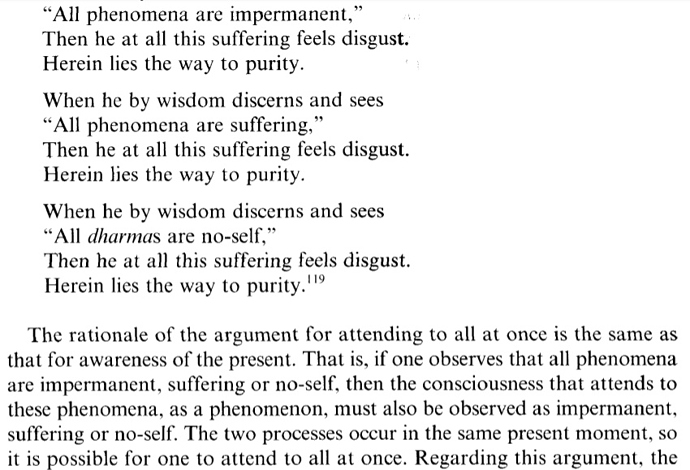 What we do, rather, is become aware of the impressions, echoes, or memories of consciousnes. The classic simile is that one’s eyes cannot see themselves; they can only see their reflection.

Interestingly, Yao also notes that Buddhaghosa’s view is rather similar. It is noted that for Buddhaghosa:

I find it difficult to follow exactly what Buddhaghosa is saying here, but I guess it could be that on seeing an object, one is peripherally aware that we are seeing it, but this does not mean that that consciousness has two objects - itself and the object, rather, it still has one object and a kind of peripheral or maybe even inferential understanding that it is a process of knowing. IDK if this is just a rewording of the same idea or if it really is different in someway, or perhaps its supposed to be understood only as being meta-aware when seen as part of a continuum and thus it would be an inference based on previous moments (not atomic moments, just using the word moment here colloquially!).

Anyways, it seems like meta-cognition and meta-awareness is a big deal in modern consciousness studies, so I was just wondering of any sutta passages that might mention something similar or related.

My source is Zhihua Yao’s “The Buddhist theory of self cognition”, she mentions the passages here

Thanks! The passages she refers to are quite closely related, and they do indeed hinge on the problem of whether a given instance of knowing can know itself.

you could still say it is a kind of self awareness, its just one of past consciousness, not present consciousness knowing itself in the present.

Oh, yes. I mean, there has to be an understanding of the mind, else all our meditation is in vain! The question is the nature of that understanding. The Kathavatthu passages don’t discuss it in detail, but they do show the concepts were understood. The conflict there seems to hinge on a dispute as to whether we are talking about direct awareness (paccakkha) or inference(anumāna). Sorting out the details of this was, I believe the main thrust of Dignaga’s work.

I’m not sure but isn’t this just getting caught in intellectual views… I don’t think that understanding the process of understanding actually brings any benefit what-so-ever, IMHO it just puts up a barrier to allowing the causes and conditions to operate freely in. Again IMHO it is much better to focus on putting the causes in place, and then putting all effort on being mindful of what happens. Note I am very much a practice oriented person in regards to the Dhamma…

Well, one could argue that trying to understand some of the details of how the viññanakhanda operates might have practical uses for a practitioner, if only just by providing a useful framework for inner observation.

Or as Birgit Kellner defines it “an immediate, non-conceptual mode of awareness that provides access to how mental content (including feelings, etc.) presents
itself subjectively.”

I have read the topic and, as anything relating to phenomenology, I find it to be simply a wrong angle of looking at things. You can’t say about it that it’s necessarily wrong, it’s just that it’s not a good angle of looking at things. The 2 words “subject” and “object” + thinking and pondering in this direction is not really the direction Buddha used.

This angle of looking at things might seem promising and appear to be leading somewhere, but it’s not. The way buddhism looks at consciousness, an angle suited for understanding no-self, is something like this: Consciousness and no-self (explained in drawings) - Dhamma Wheel

I have your posts on this site and dhammawheel, and it has all led me to believe you don’t understand phenomenology or the topic. It has nothing to do with seeing consciousness as some kind of single source as in the picture you linked to.

Yes you’re right, and I apologise for my poor wording

If it is of benefit to you, then go ahead

My intention was just as a reminder of the need for balance, and to keep a tight leash on mind constructs when dealing with the more refined inner work.

I have your posts on this site and dhammawheel, and it has all led me to believe you don’t understand phenomenology or the topic. It has nothing to do with seeing consciousness as some kind of single source as in the picture you linked to.

I agree, phenomenology has nothing to do with that. That is just the normal view about consciousness of people who believe in a self. What I was trying to show is that buddhism looks at this problem from a specific angle, one that is conductive towards understanding no-self. The angle phenomenology looks when trying to understand the mind is an angle that does not lead anywhere, that does not lead to any important conclusions or insights. It appears to lead somewhere, it does have logic, yet it’s simply not the proper angle of looking.

Imagine somebody would take a broken car to a mechanic. Rather than investigating the engine, the mechanic might start asking “what country was this car built in? If it’s french, then it might have some problems with the electrical system” - nothing really wrong about this conclusion and it does follow logic in a way, but it simply does not lead towards understanding the problem.