Does Craving come before the three roots, or does craving stem from them?

Over the past year or so I’ve fiddled with “dhamma graphics”. Here are a few examples - http://i.imgur.com/rMdnKfn.png

I had the idea come to me one day of a tree, and cutting out the tree from the branches down to the root to end saṃsara. I’ve created the first draft of it here -

So the fetters are the tall branches, then under that I have the three unwholesome roots, then craving, then ignorance.

I tried looking at the graphic both ways, and I think from both the 4NT and DA, it makes sense for craving to come first, then the three roots stem from it.

Or is it just like consciousness and nama-rupa, basically co-existing and arising together.

I’ve looked through my notes on Lobha dosa moha from the suttas I’ve read so far and I’ve not found a definitive answer, maybe there isn’t. but I’m looking for any feedback regarding this, thanks :).

Ignorance is one of the anusaya (AN 7.11) & asava (MN 9 has an excellent discussion of the interaction between ignorance & asava) and ultimately the root cause of it all (SN 45.1).

AN 10.61 discusses the relationship between ignorance & the hindrances.

When the anusaya erupt/flow/leak out (asava) they first show up internally as the five hindrances and then grow into ‘craving’ in relation to the external sense objects the hindrances seek, which is called ‘craving’ in D.O.

Naturally, terms such as craving (tanha) & defilement (kilesa) are extremely broad in their usage thus can be used as descriptors in the suttas for all of these categories of defilments.

For me, in terms of dependent origination, I lump the anusaya, asava (per MN 9) and hindrances (per AN 10.61) all into the nidana of ignorance. Whether this is correct or not I don’t know but it works for me.

Can we distribute those charts?

Don’t do anything with the tree chat yet, as i’m not comfortable putting it out if the information is off. Everything else is free for anyone to distribute, and has my info on it in case someone finds errors or has issue with anything I’ve put in it.

Here are the charts I have created in the past year: 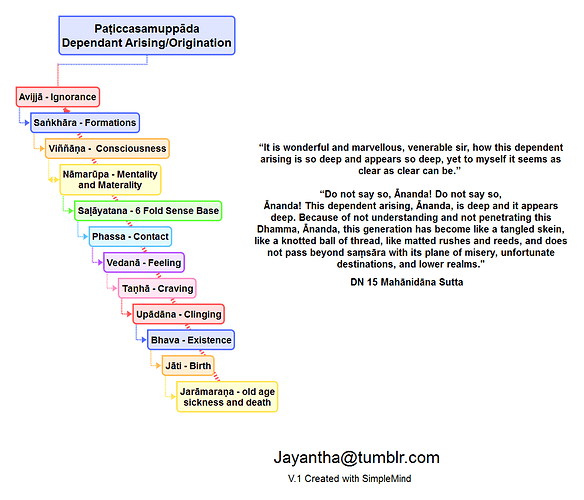 Thank you for your input, I had the asavas as part of my tree in the beginning, but not the hindrances, has given me food for thought.

Although I think I didn’t put these in there in an effort to keep things simple, the anusayas are connected to the three roots and most of the hindrances are in the fetters.

Bhante, an interesting question to explore, getting at the “root” for sure.

My current intellectual understanding might not be very well refined but I conceptualize of these three as pretty closely related.

I think the root is ignorance.
Isn’t ignorance usually defined at least in part by not understanding or practicing the 4NT’s? Abandoning craving is the 2nd task, so craving is subsidiary to or dependent on ignorance (of the 4NT’s, particularly 2, 3, and 4).

Regarding the three unwholesome roots I see moha as the root of roots, out of which dosa and lobha grow. Avidya=moha in other words. I think there’s a sutta relating these to contact and feeling. When an ignorant mind meets sukha vedanā pleasant feeling — lust/greed increase, when an ignorant mind meets dukkha vedanā unpleasant feeling — aversion increases.

my understandig of cravig is a litte bit different. I think you cannot put these things called DHAMMA in linear graphics, because there is a more holistic interdependence between them. As I understand dependent origination, the buddha explains the condition of a feeling beeing in three levels of experiencing: first the obvious birth till suffering and death, than a deeper level from consciousness till existence and then the very root: because of not knowing-and-seeing-things-as-they-really-are there is volitional fabrication of samsaric existence.
Craving ist more as the center of a perpetuum-mobile: it grows out of feeling, feeds on feelings, by taking up things which are our very existence.
So in every moment of existence there is avijja, like an eggshell around us or like a matrix.