A Japanese company has introduced a new role for SoftBank’s humanoid robot “Pepper” - a Buddhist priest for hire at funerals. Chanting sutras in a computerized voice while tapping a drum, the robot was on display on Wednesday at a funeral industry fair - the Life Ending Industry Expo - in Tokyo. Nissei Eco Co., an unlisted plastic molding maker, wrote the chanting software for “Pepper”, which was introduced by SoftBank Group Corp. in 2014.

With Japan’s population ageing and shrinking, many Buddhist priests receive less financial support from their communities, prompting some to find part-time work outside their temple duties, said Michio Inamura, Nissei’s executive adviser. The funeral robot could step in when a priest was not available, he said. It also cost less at 50,000 yen (about $450) per funeral compared to more than 240,000 yen ($2,200) for a human priest. 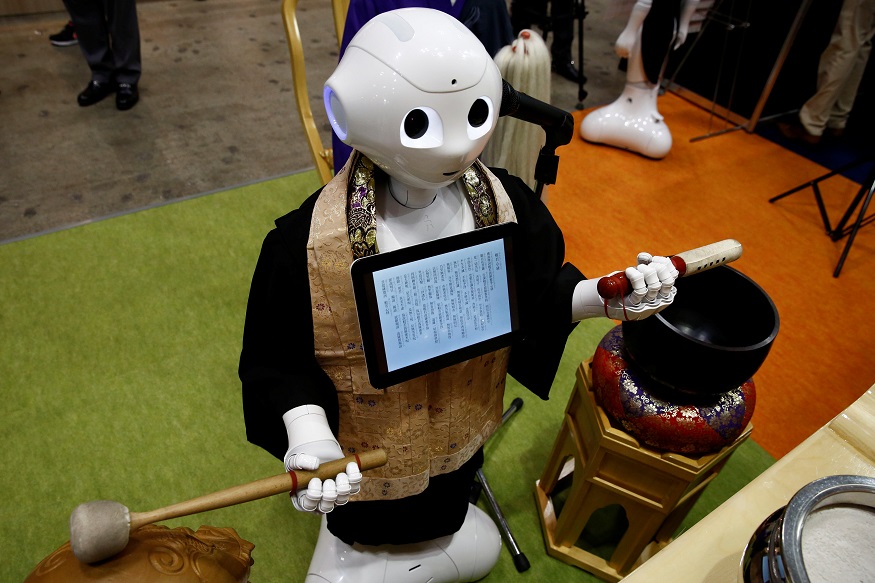 With Japan's population ageing and shrinking, many Buddhist priests receive less financial support from their communities, prompting some to find part-time work outside their temple duties. This pushed a Japanese company to find a new role for the... 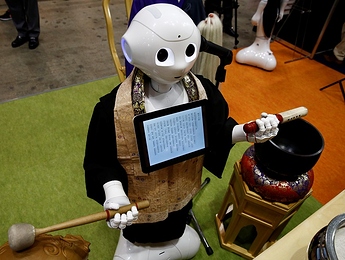 These have been around for a while. Ajahn Brahm and I used to joke about getting one for the monastery, it would save a lot of time for the monks!

We thought the idea could be extended from chanting to counselling. Program it with a few responses, “Oh!”, “Really?”, “Hmm.” Then push some buttons for advice. For meditation problems, “just be mindful”, for marital difficulties, “what did you expect?”, and so on.

But grotesqueries like these robots apart, the reality is that such matters are, in fact, being increasingly shifted to tech. For many people, their first meditation teacher is an app.

This is no different to a computer hook up to a drumming bear toy.
Most of my Sutta knowledge come from internet browsing.
I am already using this technique in my meditation group.

I have sometimes told my son, who is working in social work, that he’ll never be replaced by a robot. Something about being able to connect with people, listen deeply, and communicate change in a way that is personal and effective.

When Ajahn Brahm was here in the US some weeks ago, I sat alongside and below him during his talk, and chatted a bit thereafter. He has this gift of being very present, even with a crowd, being tirelessly engaged with people, and having the capacity to let people feel that they are listened to and cared for. No robot could ever do that. No techie can manufacture the twinkle of an eye (after a bad joke) or an authentic smile.

And with you, Bhante, you perhaps go even further, in that you can make this heart connection with people, instill in people a deep reverence and connection with the Dhamma, and then bring the Dhamma into their lives in a very personal and pragmatic way. I think it is your prior recorded talks that connect so many of us with you. Youtube is yes, the technology, but the attraction and the connection to the listener is in the intellect and “soulfulness” of the talk. For young people that might consider a life as a monastic, you inspire what might be possible in monastic life, a life of unique and quality scholarship mixed with a life of communication, service and authentic heart-driven guidance. And that is something technology cannot ever replace.

I can think of many monks around these days that might be easily replaced by robots one day. But I do think that there are some monks and nuns that have these qualities of heart and mind that cannot ever be copied by technology, no matter how far AI may progress. These are the kind of monks and nuns that need to be inspired and cultivated. What is happening in Japan is tragic, but the potential for the current and next generation of monastics (and the word of the Buddha via SC) to infuse this confused and angry world with the Dhamma is boundless.

What is happening in Japan is tragic

Actually it is not.
This is another way to propagate Dhamma to new generation.
This relief the monks from mundane duties and they can spend their time with more productive matters like translations.
We have to embrace the positives of the new technology.

This is another way to propagate Dhamma to new generation

I would not call the chanting and banging dhamma.
one of the first fetter to let go is attachment to rite and rituals.
Unfortunately all traditions are full of rites and rituals including bowing to statues and to people.

This topic has probaly run its course, but I saw this just a moment ago and thought to post it as a follow up.

Are there any jobs robots can't take from people?

The problem’s plain to see:
Too much technology
Machines to save our lives.
Machines dehumanize.