Thanks for sharing your experience Bhante… It will helpful for me… ^.^

When I gave fixative, the colour is still beautyful… It takes 4.5 hours until the solution thick and dark. About 8.5 - 9 / 10 evaporated… Well done, many thanks for your help Bhante… 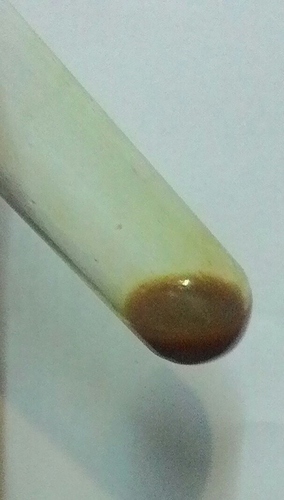 I made my robe with jackfruit wood.
I sew it with my hand… (and with sewing machine to make the sewing stronger…
Many thanks Ajahn @sujato… 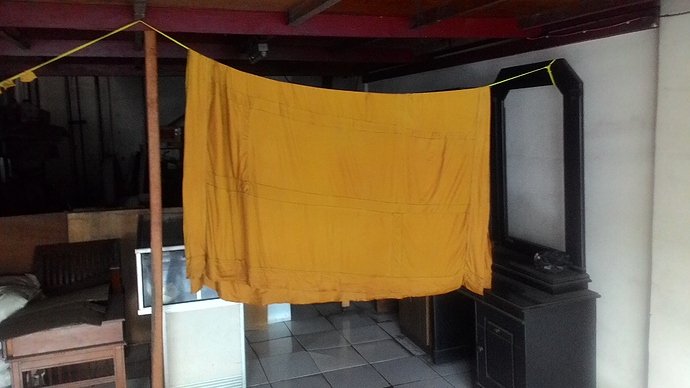 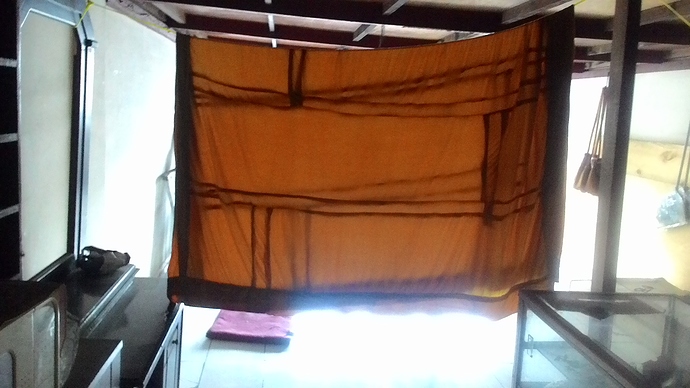 I’m impressed with the knowledge and the application! However it sounds ancient (do monks use saffron at all or is that a myth?) requiring a good deal of dedication, and chopping down trees for fire wood and chips. I guess it would be nice to see the skills maintained in a museum like setting, unless one is actually in tropical jungle. Has anyone seen a robe made out of bits of a buirial shroud? This is the kind of tree under which the Buddha is supposed to have found enlightenment.

It is from the bark and the seeds of this tree that the colors of the “yellow robes” were supposedly achieved. From an yellow orange (bark) to a yellow khaki (seeds)."

The fact that the trunk is absolutely straight from its basis, allows a perfect straight posture of the back, while meditating.

I made my robe with jackfruit wood.

I sew it with my hand…

Wow, that is so amazing, congratulations. there’s nothing like wearing a robe you’ve sewn and dyed yourself.

do monks use saffron at all or is that a myth?

I’m not sure. I haven’t actually heard of monks using saffron these days, but there are certainly stories that associate monastics with the saffron plant. I guess in the old days it wasn’t so expensive.

kaṣāya means among other definitions:

May I ask where you got that from? I haven’t heard of kasaya being associated with a specific plant before.

The Vinaya discusses dyes at some length, and it shows that the monastics used a variety of different plants, bark, flowers, and so on. Probably it would depend on the local availability.

Holy moly, can’t just remember where i got that from.
Some dictionary, I suppose.

I missed it earlier. It traces the identification with Bignonia Indica to Rig Veda ii , 28 , 21. Which, okay, but I’m not sure how solid such an identification can be.

This tree is majoritarily found at the slope of the Himalaya. Which would make it a quite common tree in Buddha’s area.

Btw, i quite like the “stain/sin” parallel attached to it in Chup.

I remember a story about a woman working with chimps, training them in sign language. She said that there were so many things that happened “off the books”, and because they were random and unrepeatable they couldn’t be part of the proper study.

One time they had to transport a chimp who really hated travelling. So she had to trick him to get in a cage and load him on to a truck. The poor chimp just looked at her with such disappointment and made the sign “dirty”. She had never used or taught that sign in that way, only for objects that were dirty. It was a spontaneous metaphor that the chimp made, connecting dirt with immorality.

This is the kind of tree under which the Buddha is supposed to have found enlightenment.

Is this the Asethu or Bodhi tree then?

For those interested in natural dyes - they are everywhere. Here’s one resource https://maiwa.com/pages/natural-dyes

I doubt any monks in the Buddha’s time used saffron, as even after the “threads” are dried, the spice is perishable, plus the flower must be harvested the same day it flowers before it wilts; this makes saffron long a very expensive dye, and cheaper alternatives would have been easily available in jackfruit and tumeric.

Perhaps a gift to the Buddha would make it possible… but unless mentioned in the EBTs, I doubt it. Saffron (pronounced /ˈsæfrən/ or /ˈsæfrɒn/) is a spice derived from the flower of Crocus sativus, commonly known as the "saffron crocus". The vivid crimson stigmas and styles, called threads, are collected and dried to be used mainly as a seasoning and colouring agent in food. Saffron, long among the world's most costly spices by weight, was probably first cultivated in or near Greece. C. sativus is probably a form of C. cartwrightianus, that emerged by human cultivators selectivel Saffron's tast...

try adding some bits of old iron into the mix when using gum leaves.

Perhaps one might find these resources useful. Perhaps these people would even be delighted to help in Australia

Natural Dyes From Your Own Backyard

Fun and Games with Natural Dyes from the garden

Plant Choice
"For example, Eucalyptus nicholii (Narrow-leafed Peppermint) leaves can be used dry or fresh to get either a warm yellow or a burn orange." The colour also varies depending on the fabric. You can try to dye anything, but protein fibres - like wool & silk - will bond more easily with the dyes than plant-based fibres - like linen & cotton.

The colours can also be surprisingly intense. “Buddleja (Butterfly Bush, Buddleja sp.) produces a golden yellow from flower and leaf. A warmer yellow is from marigold flowers (Tagetes sp.). So when you’re gardening and dead-heading your flowers to encourage new growth, you can use all that material - not just in the compost, but first of all in the dye pot and then afterwards in the compost! You can do the full cycle of it.”

I was going to start a new thread, but remembered this one… Mods do as you see fit

I figure everyone is at home looking for backyard crafts, so a revival of this theme could be justified.

Exciting news. It can be done! So far I’ve created test swatches which are ‘monks brown’ from white cotton and ‘Dhammasara brown’ (chocolate) from my very faded work-robe. They are curing and smell amazing (and a the texture of ‘crusty cardboard’).

My first test, I started with instructions from ACT textile artist Sally Blake and her colour database for eucalyptus dyeing. I used the leaves from Eucalyptus Wandoo and rusty bolts, and had successful results on wool but couldn’t get the colour to stick to cotton. Maybe if I’d cooked the dye to ‘crude oil’ it would have been deep enough.

Then recently, I was inspired by the monks at Abhayagiri, who are now dyeing with their local Madrone tree bark and thought I would have another go. I had a short correspondence with them for some tips, and then a great journey down the rabbit-hole of internet research, to discover that the very tree that causes me much hay fever dukkha is the answer. The Marri tree Corymbia calophylla, which apparently is not a eucalyptus, oozes a red sap (Kino) and has a beautiful dark bark and boiled up to a much much thinner dye than Bhante describes produced promising results (no iron or other fixative except soy milk).

Get a good chunk of jackfruit heartwood. How much? I would really be guessing, but maybe 10kg? The color varies a lot, so try to get wood with a deep color.

Bhante @sujato, was this roughly the amount you remember using for a triple robe set?

I have photos saved on my tablet of what I have achieved so far and have documented my method (a variation on Sally Blake’s) which I can share if people are interested. I’m still very much in research and development mode. So if anyone can recommend resources specific to eucalyptus (or other high tannin trees) dyeing I would be appreciative.

Hi @Pasanna I’d be interested in seeing your tests!

I also started down this rabbit hole a while ago whilst at Bodhinyana. There’s also a lot of resinous trees in the area that might produce a deeper colour than leaves and barks if crushed and boiled to a reduction… For some reason I became convinced that wedge shaped segments in the trunks of the xanthorea grass trees would yield a beautiful colour (and a nice delicate resin fragrance) but I never got around to it. Please experiment for me!

I also tried experiments with tumeric (too fugitive but nice) and had plans to start using kitchen scraps (red onion, carrot, beetroot, orange rinds etc) which have a but more intensity and last longer. It might be possible to supplement your dye with such things? Certainly from Sally Blake’s research it seems there is incredible variation from season to season even of the same tree so it’s going to be hard to get consistency, perhaps. Another point is, as Bhante mentioned above, in Thailand, the natural jackfruit dyed robes are constantly being re-dyed with every wash, which is probably something you’d need to do to maintain colour. I did know a monk who tried eucalyptus dyes from the NSW mountains but they looked quite yellowy green and faded super fast.
Have fun with your potions!

PS you mentioned using rusty bolts above, but using iron “saddens” the dye, dulling it. For brighter colours try using alum maybe? Although with cellulose fabric, adding a protein to the fabric prior like the soy milk as Sally Blake used is probably the best for eucalyptus, but perhaps the alum might still help.

Hi Bhante,
I brought my tablet down so here are the tests so far. I’ve included my commercially dyed formal robes as a colour comparison. 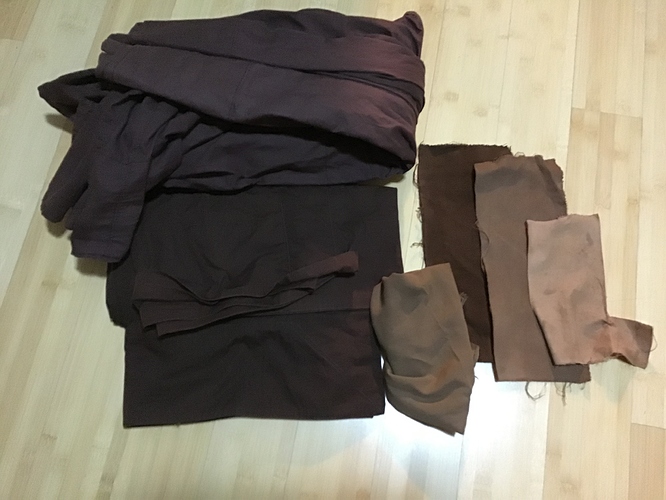 Top left: my upper robe (with it’s strange purple tinge)
Bottom left: my lower robe (which is what I’m ideally aiming for)
Middle bottom (scrunched up): The off-cut from my faded work robe which I used as a base for the darkest colour.

1 & 2 were prepared by a quick scour in washing soda and detergent and 24 hour soak in soy which I dried and cured for 48hrs-ish. No alum or iron was added.

I’ve been eyeing off the grass trees too, but think that this Marri tree project is heading the right way.

I emailed Sally Blake to ask her about colourfastness, she suggested that the colour, once worn in would last as long as a commercial dye. My first test (not pictured), from wandoo leaves, came out too light but the colour has faded no further over 10 washes. I will patch a small bit of the test pieces in this photo onto my work robe once it’s cured and see how it goes.

I chose to use iron (with my wandoo test) to get the dark chocolate colour that we wear. It didn’t seem to sadden the colour but just darken it. Oops no photos of that one. I think in my new Marri test, adding alum would probably give a brighter colour which would be beneficial to making the more orange colour required for the monks robes.

One of the nuns tells me that while Ven. Dhammajiva was here, he found a large chunk of resin from the Marri tree and took it back to SL and was able to reproduce his dark orange colour just from that. I didn’t hear how colourfast it was. Therefor my plan is to collect a large quantity of bark(2-3 shopping bags ~ 8-10kg) from the sappy part of the tree and maybe 1/2 cup of resin crumbs and then try to reduce this to a super concentrate. I will probably add some leaves as I read somewhere it adds to the colourfastness. I will also do some test with messing with the pH of the cloth using the washing soda, so see if I can get it to take a bit more dye that way.

Interesting… Thanks for sharing… I hope I can make it without using alum or iron too… And also soda to lowering Ph level.