I am very excited about a personal project I took on as of yesterday. I made a commitment to start reading all the suttas, in order, at least one per day, until I finish with the CN, MN, SN, AN. I have read a few randomly, avoiding the ones that are lengthy, but I really want to read all of them now. I know it will take me a LONG TIME (years?), but I am sticking with it. I can certainly do many a day if they are shorter ones. I have a notebook and I am just recording a short summary of each one with the main message. I will also record questions to email to my teacher as they come up.
For DN1- the simple message is “Don’t try to understand everything in the cosmos because that will keep you trapped in the cycle of birth and rebirth.” I am not going to over-intellectualize- I just want to get the main takeaway for now!

I recently started with reading through the MN. I am using @Khemarato.bhikkhu’s Majjhima Nikaya syllabus. Maybe you will find this helpful as well?

Thanks for the shoutout @Danny!

To forward on more great resources, you might find ReadingFaithfully’s sutta checklists helpful, since they allow you to read the canon out of order but still keep track and ensure you make it through! As you go, I also love his advice to compile a personal medicine cabinet of quotes that speak to you.

Best of luck on your quest @Bel!

DN1 also talks about wrong jhana views, which might be worth being wary of:

DN1:3.21.6: Quite secluded from sensual pleasures, secluded from unskillful qualities, this self enters and remains in the first absorption, which has the rapture and bliss born of seclusion, while placing the mind and keeping it connected. That’s how this self attains ultimate extinguishment in the present life.’

Thank you so much!!!

Oh my thank you! That checklist is extremely helpful. I started to make my own checklist and then I decided it was too much work and I just wanted to get reading.

I love the idea of the quote medicine cabinet too. I am also collecting questions to hit Bhante Suddhaso with once in a while! Thanks again!

Thank you very much!

This syllabus by @Khemarato.bhikkhu is very helpful, as is the Reading Faithfully website. Thanks again everyone. Just what I was hoping for!

@Bel @Danny @Khemarato.bhikkhu I just wanted to know is there an order in which one can go through Tipitika as a lay person? The order is to read the important one’s in a minimum time frame. Anyway I have seen MN syllabus, but is there a syllabus for Tipitika?

FYI, as part of ‘Getting Started’ I read Brahmajasutta (DN 1). So to optimize my reading I am asking this question.

I wanted to post this question as a new topic, but there were suggestions related to this topic. So, I posted this question here without creating new topic. Moreover, I am new to this forum.

Welcome to the forum!

Check out this category for a wide array of related topics:

Personally I like to use Bhikkhu Bodhi’s “In the Buddha’s Words” as a guide. You could then find the full sutta on Sutta Central and read it there.

Please see this page on Reading Faithfully for a breakdown of the suttas referenced in this book and links to the full versions on SuttaCentral. There is also a handy checklist to help you keep track of your progress. 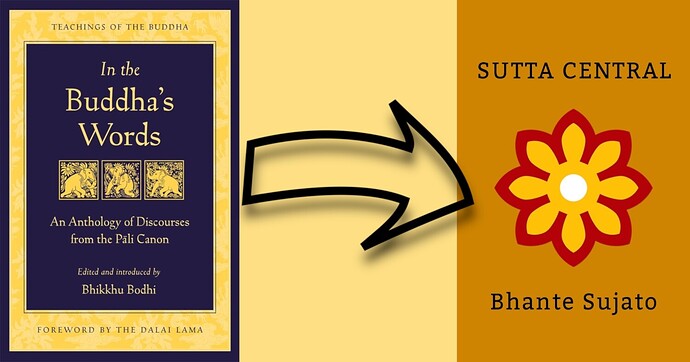 In the Buddha's Words: An Anthology of Discourses from the Pali Canon Linked...

This is the detailed table of contents of  In the Buddha’s Words: An Anthology of Discourses from the Pali Canon by Bhikkhu Bodhi, published by Wisdom Publications, but linked to the free translations available on SuttaCentral.net. Most of the...

I read through the suttas and vinaya last year and the year before. In retrospect, what I wish I had done was alternate between the AN and all of the other Nikayas. There’s a reason the same lists with slight variations are repeated so many times - they’re important. But it’s very draining reading through one after another.

Personally, I think the three most important suttas to hit early on are DN 1 & 2, and then the right view Sutta. I also might recommend reading the first introductory story to the vinaya and the whole khandaka if you ever find yourself feeling like you’re getting confused by the out of order and sparsely detailed narrative elements of the Suttas.

I just wanted to know is there an order in which one can go through Tipitika as a lay person?

Indiscriminate reading of the body of suttas is incorrect as it is motivated by a western perspective of how knowledge is presented:

“While in a literate culture in which systematic thought is
highly prized the lack of such a text with a unifying
function might be viewed as a defect, in an entirely oral
culture—as was the culture in which the Buddha lived and
moved—the lack of a descriptive key to the Dhamma would
hardly be considered significant. Within this culture neither
teacher nor student aimed at conceptual completeness. The
teacher did not intend to present a complete system of
ideas; his pupils did not aspire to learn a complete system
of ideas. The aim that united them in the process of
learning—the process of transmission—was that of
practical training, self-transformation, the realization of
truth, and unshakable liberation of the mind.” —Bikkhu Bodhi, “In the Buddha’s Words.”

From a practice view the Buddha recommends a standard method for progress. This is to take what is already known, then to compare new suttas with it to construct a cluster of related suttas on a particular subject. This method is based on meaning and could well apply to Bikkhu Bodhi as teacher:

“When, on observing that the monk is purified with regard to qualities based on delusion, he places conviction in him. With the arising of conviction, he visits him & grows close to him. Growing close to him, he lends ear. Lending ear, he hears (reads) the Dhamma. Hearing the Dhamma, he remembers it. Remembering it, he penetrates the meaning of those dhammas. Penetrating the meaning, he comes to an agreement through pondering those dhammas. There being an agreement through pondering those dhammas, desire arises. With the arising of desire, he becomes willing. Willing, he contemplates (lit: “weighs,” “compares”). Contemplating, he makes an exertion. Exerting himself, he both realizes the ultimate meaning of the truth with his body and sees by penetrating it with discernment.”—MN 95

It can be seen from the last sentence in the above extract that there must be a duality of practice and knowledge. The core practical suttas are the Anapanasati and Satipatthana. There the focus is the first and second tetrad of the Anapanasati sutta, the development of awareness of the effect of breath on the body, and from that the induction of joy.

The MN and DN have internal orders where the more “important” suttas are placed in front. The idea being if you never finish the three books of the MN for example, at least you finish book 1 or ideally up to book 2. This may also be why the suttas on monastic conduct are up front in the DN. It also may explain why some suttas have been added at the end of the MN, to bulk it up as a complete syllabus in its own right (I.e. if you never read anything else, at least you have read the MN).

So the “correct” thing to do with the MN and DN at least is actually to read them front to back. By the time you get to the end of both of them, the orientation is already into abhidhamma land (the “newer” material is at the ends of both texts).

In the “traditional” Theravada order, the DN is book no.1, but many people find the MN more balanced and accessible as an entry point. In Taiwan they do SA first (reading the SN first seems like a fairly good idea to me, but I personally didn’t do it that way).

The AN has a numerical sequence which facilitates reading it front to back.

So yes, these books can just be read in the order they are printed.