Full ordination of 144 bhikkhuni in Bhutan

144 new bhikkhuni have been ordained in Buthan, in the Ramthangkha monastery. 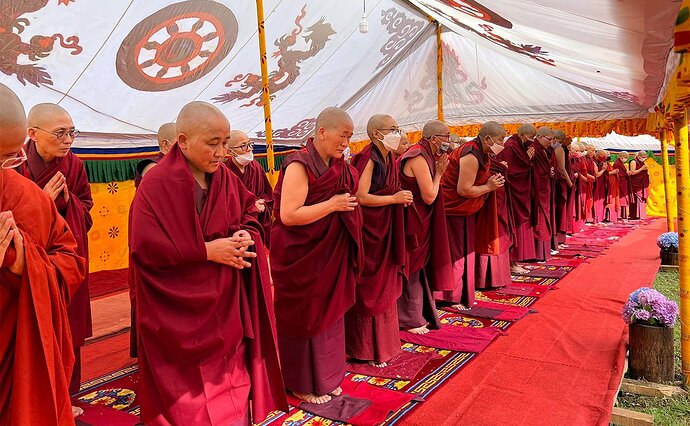 This is good news.

Sadhu! sadhu! So good to hear!

I met the “first Bhutanese bhikkhuni” some years ago at Bodhgaya. She was, if I recall correctly, a princess, or at least from a noble family. It seems that gave her the opportunity to pursue her vocation. Great to hear it is opening up to more women.

This is hugely encouraging. Let’s hope it’s a further step towards raising the status of bhikkhunis throughout the Buddhist world, in all traditions, including here in Australia.

They didn’t mention it but references to this being an ordination “within the Tibetan tradition” makes it sound like they are being ordained in the Mulasarvastivada vinaya, rather than leveraging the Dharmaguptaka vinaya as other nuns have done in the past.

I don’t really understand all the technicalities, but I have read from others that this is the case and that there is historical precedent as well. The indidivudal linked to the following to support this, Karmapa Mikyö Dorje and the Bhikshuni Vows .

Yes, it is done purely by monks in Mulasarvastivada lineage.

We are pleased and honoured to announce that on 21st June 2022 the full bhikshuni ordination was bestowed on 142 nuns at an auspicious site below Paro Taktsang in Bhutan by His Holiness the Je Khenpo, Tulku Jigme Chhoeda, head lama of the Drukpa Kagyu monastic order in Bhutan. This historic event was supported by His Majesty King Jigme Khesar Namgyel Wangchuck and organised by Her Majesty the Queen Mother, Ashi Tshering Yangdoen Wangchuck, who is the Patron of the Bhutanese Nuns Foundation and Dr Tashi Zangmo the founding director of the BNF.

Traditionally the full ordination for nuns was not given in the Mulasarvastivada vinaya lineage extant in Tibetan and Bhutanese Buddhism. The nuns only received as far as novice or shramanerika ordination. The revival of the full ordination has been a subject of research for many years but no resolution on how it could be carried it out had been agreed upon. It remains a highly controversial subject.

However nowadays nuns are living in well-run nunneries and becoming highly educated in Buddhist philosophy and practice. They themselves are now teachers and authoring books. So the time is ready for them to take the next step and become fully ordained as the Buddha Himself specified and as modern scholarship has shown to be a valid possibility. The nuns are fully capable of studying and undertaking the Vinaya or Monastic code, performing the monastic rituals and leading an exemplary life. In this way the Fourfold Sangha of monastics and laity will be completed as was the Buddha’s intention.

Therefore it was with great courage and compassion that His Holiness the Je Khenpo of Bhutan made the decision to bestow this higher ordination on nuns - thus opening the door to the elevation and encouragement of all nuns in the Mulasarvastivada tradition.

The ceremony itself was carried out by the bhikshu [monk] sangha with HH the Je Khenpo as ordaining master. This method of ordination was allowed by the Buddha in the absence of a bhikshuni [nun] sangha. After 12 years as bhikshunis the nuns themselves will be empowered to constitute a twofold ordaining sangha of both nuns and monks.

Since there were so many nuns and they were meticulously ordained three nuns at a time, the actual ceremony stretched over 3 days. On the first day His Majesty the 4th or former King, Jigme Singye Wangchuk, along with his wife the Queen Mother and other members of the Royal family, visited the ordination site and the king gave an encouraging and inspirational address to the nuns.

This is a truly momentous occasion for nuns in the Mulasarvastivada lineage and we rejoice that finally a high Lama of impeccable reputation such as the Je Khenpo has stepped forward to help and support the female sangha in this tradition.

When we are dealing with the Mulasarvastivada lineage introduced into Tibet in the 8th century, there were no bhikshunis invited from India, so the nuns’ ordination was not established in Tibet. Nuns received the shramanerika or novice ordination from the bhikshu sangha only.

However the Buddha Himself declared that in the absence of bhikshunis, he allowed the bhikshus alone to bestow the full ordination on nuns. This avoids a mixing of lineages and is perfectly valid. So His Holiness the Je Khenpo selected to give this bhikshuni ordination with a sangha of senior monks only.

In 12 years time when these nuns become senior they will be able to perform the double ordination for future bhikshunis along with the monks.

Do you think the new bhikkhunis in the Bhutan tradition will be recognised by the current Dalai Lama’s Tibetan tradition?

It remain to be seen.

But I think, give 10-15 years, there will be more bhikkunis, and it will become a reality that must be accepted.

Also, the highest leaders from all Tibetan sect had already expressed support since before. There is no justification to oppose it.

Sadhu! Wonderful to hear! The more Bhikkhunis, the better!