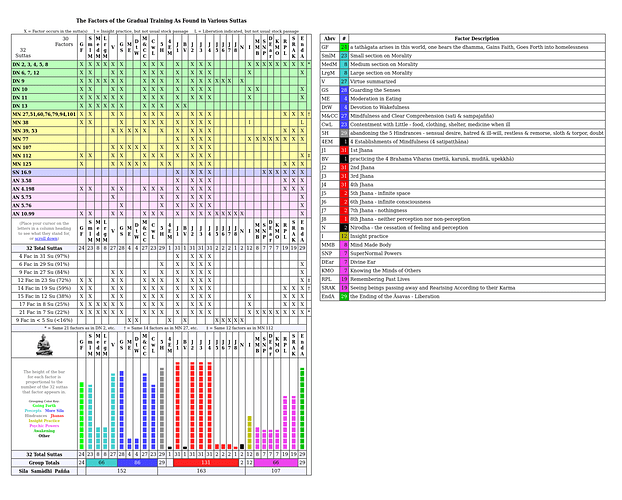 Doesn’t this table assume that the 4 immaterial attainments are a progression of the path? I’ve heard elsewhere (most recently on the topic of Polak’s jhanas) that these attainments aren’t necessarily leading further down the path and are not necessary. Furthermore, the 4 satipatthanas have been described to me, also on the Polak thread, as being part of anapanasati and not a preliminary practice before it.

By my interpretation such a reading would be a bit unnecessarily… ‘strict’ and might miss the chart’s much more general purpose. I understand it to be a tool for developing a loose overview of the key components that feature in descriptions of the gradual training across the canon (a more in depth engagement with the various aspects and their subtitles is naturally required for proper understanding).

At the same time, I think keeping in mind the dangers of getting locked into an excessively linear view is very important. I likewise think that it is definitely possible to read the chart as suggesting a fixed linear path, but to me that’s more a matter of mode of interpretation.

Doesn’t this table assume that the 4 immaterial attainments are a progression of the path?

the table is actually based on the suttas and so obviously does align with them, another matter is that this progression of the path may happen to not be in complete alignment with its expositions found in some other suttas

Metta Sutta and the end of rebirths

Some aspects of gradual development were collected in this thread: But, these conditionality chains are not called "gradual path" or "gradual training" in the SN, as far as I can tell. Even in the AN it's not quite the same as what can be found in the MN; most references are to the general fact that progress is gradual without setting out detailed stages.

I think the Gradual Training lists in the MN & DN were built from the SN & AN. On that note, something quite interesting was pointed out in another thread:

Why is not stated that careful attention develops the 4 foundations of mindfulness?

notably contrary to this sequence: mindfulness and clear comprehension -> restraint of the sense faculties -> the three kinds of good conduct the order of the factors in the Gradual training is reversed: the three kinds of good conduct -> restraint of the sense faculties -> mindfulness and clear comprehension but the order of AN 10.61 to me seems more logical and progressive notwithstanding the word 'Gradual' as a heading for the second one

Interesting! I think the second point you highlight (from LXNDR) is a good example of the potential limits of taking too linear a view. Sure, the general direction of movement is towards clear comprehension, but as far as I can tell the three mentioned… thingamabobs… are mutually supportive and are in a certain respect are developed in tandem with each other. It strikes me as reasonably relatable to circular (or perhaps spiral, or perhaps network) nature of the eightfold path which, of course, begins with right view — the end of the path.

gathered into one file all suttas featuring in the chart

I am enjoying your work.