Help for an iPad user please :)

When I started on D&D I read that it works best with Chrome, so I have been using it with Chrome on both my Apple computer and iPad. No problems on the computer, but I have a couple of issues I would like to solve on the iPad, because I carry with me at times when I can’t access the computer.

Q1
On the iPad I can’t scroll easily and waste a lot of time time negotiating long threads (the slider on the right of threads works brilliantly on the computer). Also, I can do multiple quotes into a reply on the computer but the iPad doesn’t always allow this. … So I went in search of the Discourse App in the App Store. It downloaded OK, but when I try to add discourse.suttacentral.net it tells me, “This forum is using an outdated version of Discourse “ and doesn’t allow me to do anything more. Can anyone offer advice?

Q2
Does anyone know about a font with diacritics for iPads? I have Unicode on the computer but would really love to be able to type accurate Pali on the Pad.

@Gillian
I don’t know if tthis system (in thread below) of Pali diacritics will work in an ipad but it’s what I use on my desktop mac. it’s easier than unicode (there’s a way to type pali diacritics using that too though I can’t rmember how as I never use it):

Well, since you were wondering… ṛṝḹḥśṣ I decided to put the sanskrit chars after the pali ones, instead of putting everything in sanskrit alphabetical order.

Hi @Gillian,
try using “Hinglish” keyboard - that has most of the diacritics.

@Aminah, perhaps you could offer some advice

@Aminah, perhaps you could offer some advice

Sorry, I guess that’s probably not what you’re after, but I have a long standing contempt and know next to nothing about operating their devices (apologies to all the Apple fanatics).

FOund and installed. Thank you. It seems there’s trouble shooting to be done before it actually works. I’ll get back to it later this evening. Do you use it yourself @tkk?

Thanks Linda. Mac computer and device operating systems are different, that’s my issue. I love using Unicode on my Mac as the shortcuts seem intuitive. Hope your Pali learning is progressing faster than mine is atm.

Troubleshooting? As it is pre-installed you only have to activate it and it works out of the box. I use it regularly on my iOS devices. Just tap and hold for example ”t” to get ṭ.

On the Mac I use the english extended keyboard (also a pre-installed keyboard - just activate it). With option+a you get the macron + a is ā. Option+w is the dot above, option+x the dot below.

No extra downloaded keyboards needed for iOS or macOS.

Thank you @tkk for the tip on holding. It still took me 5 mins to figure out that the movement has to be hold+slide! I can do it now: Ṭ ṭ Ā ā Ã ã M̐ m̐ …

Troubleshooting? As it is pre-installed you only have to activate it and it works out of the box. I use it regularly on my iOS devices. Just tap and hold for example ”t” to get ṭ.

On the Mac I use the english extended keyboard (also a pre-installed keyboard - just activate it). With option+a you get the macron + a is ā. Option+w is the dot above, option+x the dot below.

Agreed on MacOS, it works perfectly. I’ve been wondering the same thing with iOS though. Hinglish does have ṭṬ, ḍḌ, ṇṆ, Ṅṅ but lacks dotted m or l. (M̐m̐ isn’t the same as dotted m in Pāli).

You are right, it has not all the diacritics, but so far it’s the best alternative I know for iOS. For some characters I have defined shortcuts so I can write ṃ or ṇ or ṅ with my normal keyboard. Just under setting>general>keyboards you might find shortcuts, where you can define your own. In order to create some for chars with diacritics just create a note in the notes app on your mac or copy the character from a sutta. The drawback is, that you have to delete the space character after each time you inserted your shortcut. 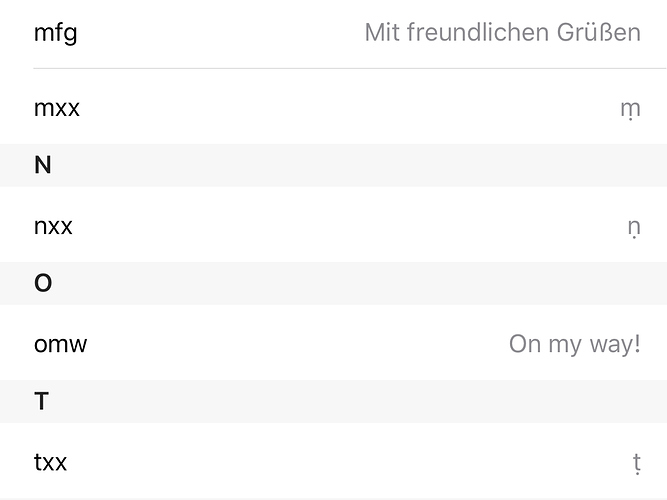