Help in understanding stories of gods with wiki

Sometimes we only read suttas that truly hopefully was said by Buddha. Take a little break. Read some stories about the many characters in Buddhist text. Like Sakka, Indra, Vessavana, Varuna etc You might find verses that can help you also. “Said by them”

One of the really fun story of Bodhisatta past life is the next sutta where he was reborn a tree-fairy. Characters found sakka and the king vessavana who is not human king but a king god who is god-king of the semi-divine Yakshas so make it more fun try to understand who are the ones in the suttas by searching a little in Wikipedia. After that read story the again and it will make more sense. 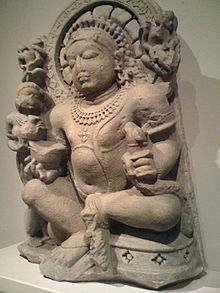 Kubera (Sanskrit: कुबेर) also known as Kuvera, Kuber or Kuberan, is the Lord of Wealth and the god-king of the semi-divine Yakshas in Hindu culture. He is regarded as the regent of the North (Dik-pala), and a protector of the world (Lokapala). His many epithets extol him as the overlord of numerous semi-divine species and the owner of the treasures of the world. Kubera is often depicted with a plump body, adorned with jewels, and carrying a money-pot and a club. Originally described as th...