History of the western term "mindfulness"

I’ve heard it said several times that origins of the term “mindfulness” comes from a 19th or early 20th century translation of “sati” adopted from some period movement, perhaps Christian based. How did mindfulness become a buzzword?

To my knowledge, the term was coined by TW Rhys Davids. Or perhaps not coined, it was around earlier, but he used it as a translation of the Buddhist term sati. Unlike many other technical terms, this one stuck. Obviously it has taken a life of its own these days, but it remains, I think, a pretty good rendering of sati.

the term was coined by TW Rhys Davids.

Where Does The Word “Mindfulness” Come From?

So in Rhys Davids time of the 1880’s, how would most people understand that term to mean?

For instance, in 1920’s America the tern “gay” conjured up associations like joy, happiness, partying. Today “gay” is a term about sexuality.

Was the term “mindfulness” in the 1880’s something that meant something like prayer or contemplation?

Was the term “mindfulness” in the 1880’s something that meant something like prayer or contemplation?

Why was “mindfulness” chosen as a translation?

Ok, fair enough. But then, the question arises, why was ‘mindfulness’ picked as a translation for sati ? The term was first coined by the great Buddhist scholar T. W. Rhys Davids at the dawn of the 20th Century. Interestingly though, Rhys Davids deliberated among various terms before settling on mindfulness. In his 1881 publication of Buddhist suttas , sati was rendered as ‘mental activity,’ and even simply as ‘thought.’ It was then only with Rhys Davids’ 1910 work that he settled on the term mindfulness. The word was then later picked up and embraced by Jon Kabat-Zinn when he created his Mindfulness-Based Stress Reduction programme, which was so influential in bringing mindfulness to the West. And, he does indeed seem to capture the ‘flavour’ of sati in his influential definition of mindfulness, namely “the awareness that arises through paying attention on purpose, in the present moment, and nonjudgmentally to the unfolding of experience moment by moment.”
The Word ‘Mindfulness’

So in Rhys Davids time of the 1880’s, how would most people understand that term to mean?

Then it meant “to remember about something or somebody”. You can compare verses from modern translation of the Bible with King James Version (old standard translation of the Bible in English speaking world). Usually when they speak about remembering about something or somebody in older version there is a phrase “being mindful of…”

Mindful in the Bible (10 instances)

1 Chronicles 16:15 - Be ye mindful always of his covenant; the word which he commanded to a thousand generations;

How did mindfulness become a buzzword?

On some definitions of mindfulness

The Buddhist technical term was first translated as ‘mindfulness’ by T.W. Rhys Davids in 1881. Since then various authors, including Rhys Davids, have attempted definitions of what precisely is meant by mindfulness. Initially these were based on

Then it meant “to remember about something or somebody”.

Hey thx, I never knew this. It seems a nice connection, the idea of “memory” is still there.

From the OED it seems the word has been around for quite a while: ‘myndefull’ is first attested in a 1340 psalter, and the adverb ‘myndefulli’ in the Book of Job in Wycliffe’s Bible 1382 translation. The noun ‘myndfulnesse’ first appears in the English-French dictionary section of the world’s first French grammar: L’esclarcissement de la langue francoyse, published in 1530 by Henry VIII’s court priest John Palsgrave. Presumably it must have been already in regular use to be judged important enough to be included. Palsgrave gives it as the English equivalent of pencee (= modern French pensée, ‘thought’) 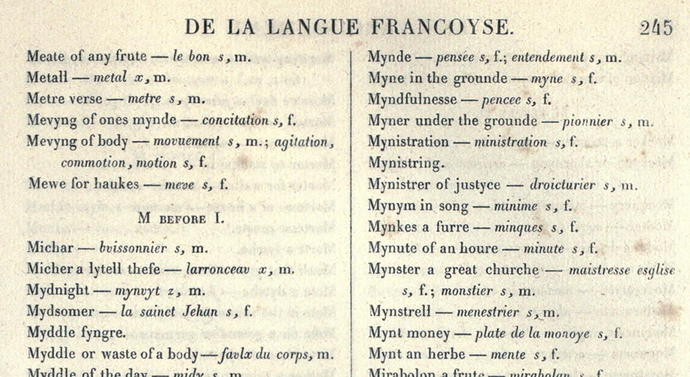 b.1.b Having remembrance of. nonce-use.

1859 Tennyson Geraint & Enid 191 Guinevere, not mindful of his face … desired his name.

1581 J. Bell Haddon’s Answ. Osor. 420 To be Baptized in Churchyardes … was an auncient custome … that so such as were to be Baptized might be made ye more myndefull to confesse a rising agayne from ye dead.
1664 Evelyn Kal. Hort., Mar. (1679) 13 Be mindful to uncover them [the plants] in all benign, and tolerable seasons.
1692 Sprat Contriv. Blackhead i. 19, I was not so mindful to preserve the Letters that came to me.
1889 Gretton Memory’s Harkb. 324 The monks were always mindful to establish themselves where there was water close at hand.

1567 Turberv. Ovid’s Epist. 141 b, So she with mindefull wrath Upon my corse for thee awroken is.
1605 Camden Rem. 32 Antient families have given those names to their heires, with a mindefull and thankefull regard of them.
1728 Pope Dunc. i. 93 Much to the mindful Queen the feast recalls.
1747 Collins Ode to Liberty 16 Let not my shell’s misguided power E’er draw thy sad, thy mindful tears.
1854 S. Dobell Balder i, Point with mindful shadow day and night, Where we lie dust below.

†2.2 Minded, inclined to do something. Also with ellipsis of vb. of motion. Obs.

1382 Wyclif Job xxxv. 5 Behold heuene, and loke, and myndefulli see the cloudis, that is heȝere than thou.
c 1540 Compl. Roderyck Mors xxiv. G viij b, We must regard, that our mouthe, spirit and hart be eleuated together mindfully in faith.
a 1568 R. Ascham Scholem. ii. (Arb.) 122 Tullie did … purposelie and mindfullie bend him selfe to a precise and curious Imitation of Plato.
1585 T. Washington tr. Nicholay’s Voy. i. ii, The Ambassadour being mindfully bent to his charge.
1871 Daily News 20 Jan., He has mindfully left for me a message.

The state or quality of being mindful; ‘attention; regard’ (J.); †memory; †intention, purpose.

Reading these OED entries prompted a flashback to my first encounter with the word ‘mindful’. I must have been about seven or eight years old and my primary school teacher had us memorize all the poems in Rudyard Kipling’s Puck of Pook’s Hill. One of them includes the verse:

If you meet King George’s men, dressed in blue and red,
You be careful what you say, and mindful what is said.
If they call you “pretty maid,” and chuck you 'neath the chin,
Don’t you tell where no one is, nor yet where no one’s been!

Wow, that’s amazing, thanks so much for that.

We must regard, that our mouthe, spirit and hart be eleuated together mindfully in faith.