How Buddhist meditation kept the Thai boys calm in the cave

“Turns out that their coach, Ekapol Chanthawong, who led them on a hike into the cave when it flooded on June 23, trained in meditation as a Buddhist monk for a decade before becoming a soccer coach. According to multiple news sources, he taught the boys, ages 11 to 16, to meditate in the cave to keep them calm and preserve their energy through their two-week ordeal.”

How Buddhist meditation kept the Thai boys calm in the cave

The boys’ coach lived in a Buddhist monastery for a decade and taught them to meditate in the cave.

Cool, but that should not clear the guy from explaining why the heck did he walk in that place with all that children in the middle of the rainy season!

Well, very glad they all got out safely.

Rice farmer Mae Bua Chaicheun has returned from volunteering to find some of her crops destroyed by the floodwaters pumped out of the cave. But she doesn't care. All she wants is for the soccer team to come out alive.

Massages, haircuts and food stalls: this is what it's like at the heart of the...

Ordinary Thais are travelling in droves to support the operation to find and rescue 12 boys and their soccer coach.

Only I think he’s inadvertently contributed to more good than harm in terms of the amount of goodwill and cooperation that has happened on a global scale. I believe, he’s done more to restore a lot of people’s faith in humanity’s capacity for goodness than most world leaders! I hope nobody is too hard on him - if anything they may need to assist him in not being too hard on himself!

I can only imagine how he’s going to feel when he hears about the Thai Seal who died during the rescue.

I trust you are aware that one person actually died as result of his irresponsibility.

If follow the logic you propose we should all celebrate criminals who hijack people and mobilize rescue and negotiations to achieve release through dialogue etc.!

Sorry but no, if the fact is that the adult in question consciously took a bunch of children kilometers into a cave system in the middle of Thai jungle and in the middle of the rainy season, then he must not only apologise for all the trouble he caused but as well be punished under the relevant law that should stop such sort of irresponsible choices to be made by adults over children’s lives!

I can only imagine how he’s going to feel when he hears about the Thai Seal who died during the rescue.

If follow the logic you propose we should all celebrate criminals who hijack people and mobilize rescue and negotiations to achieve release through dialogue etc.!

Of course I don’t know, but I am guessing that he didn’t intend to cause any harm.

irresponsible choices to be made by adults over children’s lives

Indeed, I’m sure many lessons have been learned by many people as a result of all this.

'My job is not big': the unsung heroes helping the Thai cave rescue effort

At a hilltop village, 53-year-old Thawatchai and up to 60 volunteers began another day of dangerous work trying to stop water leaking into caves.

I couldn’t help smiling as I read these accounts of how the locals had pitched in - hundreds of them it seems and many from the local tribes.

I know a tiny little bit about Thais because of having a few Thai friends and seeing the Thai community in action over here. And I couldn’t help thinking, this was just like them. Humble, selfless, hard working.

in the middle of the rainy season

Was it really? I believe I read somewhere (can’t recall now) that there was an unexpected early rain. "He's the one I worry about most." The tragic backstory of Thailand soccer coach...

The parents of 12 boys trapped in a Thai cave for more than two weeks send letters to the boys and their soccer coach telling him they are not angry.

Yes, it is the middle of the rainy season there:

"Most rainfall (rainy season) is seen in May, June, July, August, September and October"
Climate and average monthly weather in: Chiang Rai, Thailand

Of course I don’t know, but I am guessing that he didn’t intend to cause any harm.

A possible lesson: he took / was given responsibility for which he was perhaps incompetent, or an unsafe situation was allowed to develop. At some point, responsibility attaches to decisions, is this not so?

This article offers an interesting perspective. Observations about the soccer coach begin about three-quarters of the way through the article. 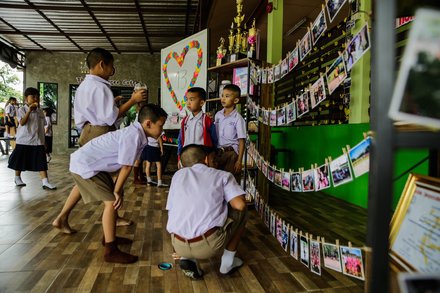 Stateless and Poor, Some Boys in Thai Cave Had Already Beaten Long Odds

Several of the boys stuck in a Thai cave already knew hardship as refugees from Myanmar. One multilingual boy acted as interpreter with rescuers.

I do see your point and understand what you’re saying.

You know that old saying of “you need to walk a mile in someone else’s shoes…” I think it sort of applies here, but maybe not in the usual way.

Cultural conditioning can run deep. Especially when we’ve lived surrounded by a particular, social, cultural and economic milieu for a very long time. I have noticed that those who have skipped around the globe for periods of time have less fixed perceptions about values and views on life. And can slip more easily into another “set of shoes” … so to speak.

I’m not meaning to offend anyone, just saying it as I have long perceived it. And there are many, many advantages to living within one set of social conditions - there’s stability, ease and sureness that those who’ve moved around alot may - it really depends on other factors too of course - not have.

One of the things I’ve noticed, sort of reading between the lines in the various news reports is something that I would ascribe to cultural differences. And that is a less regulated attitude to life - a more relaxed one.

Recently I heard someone comment on how the western country I’ve lived in now for most of my life is highly regulated. Every possible permutation and combination of what could go wrong is covered and then regulated for. Litigation is slowly becoming a reason for regulation, fear.

When I grew up amongst my Asian cousins and relatives, a totally different attitude existed. You just did stuff. Without fear and with a sort of “she’ll be right” confidence that I noticed because it was not the norm for me!

Now I can’t help wondering if it comes from a rather different and deeply held attitude to calamity and disaster and even death. When we’re cotton wooled from such things, regulated and legislated (I’m not saying this is bad, just reflecting on it), we tend to want to view the vagaries of life as being highly stressful events - even the very simple day-to-day disappointments. Sometimes, I’ve perceived, from those who’ve had different backgrounds and life experiences to me, a very different approach. One which I would very much like to learn from.

Reading some of the accounts, I can’t help noticing the values of a country that has been steeped in Buddhism for centuries. (Yes, I know there are issues, but all nations and peoples have those - we’re none of us perfect.)

I couldn’t help noticing the emphasis on selflessness (these are poor people) generosity, care for each other, forgiveness.

Yes, you could look into the past and seek to ascribe blame. Or make someone take responsibility. But it seems to me, when someone has already admitted their responsibility and apologised and suffered and tried to make amends (apparently he gave up all his food and water to his young charges), surely it’s rubbing salt in wounds, it’s adding pain and blame and taking away healing. Not just for him, but what message does it send his young charges? Do we want to teach each other that no matter how hard you try, or how good your intentions might have been, when you do make a serious error of judgement, you’ll be blamed and made to feel a lack of communion even when you honestly admit and apologise for your mistake and try to make amends?

Or you could approach things differently for the sake of whatever may or may not happen in the future - including how we approach human beings who make terrible mistakes - because we are one of those human beings too. I can’t help asking what good it would do the coach, those who look up to him, his family, his community, his country and the world, for him to be publicly made to admit fault. Why do we even need that? What is it in us that wants to do that? Isn’t the suffering that has already happened enough?

I’d be hesitant to impose any other values into interpreting what I have read so far than these. I’m not saying you shouldn’t or anyone else shouldn’t - there could be much good and value that comes from cross-cultural learning that goes in more than one direction. I’m just saying this is what currently feels right for me.

I couldn’t help reflecting on how different the news reports may have been if this tragedy had ocurred here. You would still get kind-hearted, hard working, beautiful people wanting to help. But there would be a subtle (and perhaps not so subtle) difference in the approach and thought patterns sent out into the world.

It’s not good or bad. It’s just how it is. Just conditioning.

I’m sure now that the main crisis is over, people will be looking to use the situation in different ways - some for their own gain. Again, I’m not saying that’s good or bad. But hopefully people remember and build on anything good and kind that happened and that is what will flow out into the world.

It seemed you took my comments as blaming the coach. This was not my intention. ::sigh:: Decisions were made by many, situations develop from diverse input and history. My thought was, how can suffering be reduced?

But i spoke clumsily, as i sometimes do. So perhaps i should simply have said nothing, and observed my thoughts, associations, feelings, etc and let them pass.

It seemed you took my comments as blaming the coach.

They’re just thoughts shared. Not just triggered by your comments. Though, I wasn’t going to say anything further either, but just felt inspired after I read what you wrote.

It’s all good. You’re not being blamed either.

I am being blamed, actually, but I’ll try to stop as soon as possible.

What do you mean, are you blaming yourself?

Yup. A difficult habit to abandon.