I’ve never before paused to think on the possible Australasian influence on the translation of the texts. Then I ran into Snp2.12:

Then in Vaṅgīsa’s mind, being at one and in solitude, arose this thought: “Has my preceptor become completely Cool or has he not?”

Van geezer was Cool too - he was very poetic.

You’ve gone to the jungle, the root of a tree,
Putting nibbāna in your heart.
Practice jhāna, Gotama, don’t be heedless.
What is this hullabaloo to you?
thag1.119

There is a certain interesting, partially artificial, grandeur that text takes on with age, regardless of the content:[quote]“Feram” que “propter holus,” dicas, “hoc ego?” “Propter holus.”[/quote]Look that up on a historical (non-ecclesiastic) Latin board for a translation if you want to see some proper cussing from the BCs. Looks awfully legal doesn’t it?

A lot of these Buddhists texts aren’t necessarily in as “high” a language as they seem to be at present to our perspectives. Contemporary language always seems more regal with time. I doubt there is a great deal of blue language in the Páli texts, but folksy colloqualisms (like equivalents for “hullabaloo”) probably make their way in.

You are absolutely correct; a beautiful verse, very much liked by me.

I was initially very tempted to write:

You will like one too,
It has the word hullabaloo!

Well, I think it worked out pretty well both ways!

With your initial post I was actually so moved by the verse, I took the peculiar and rare decision to set aside the comedic value… words that are “pleasing to the ear, and lovable, as go to the heart” and all.

With your second effort I made quite a racket with laughter.

Hearty congrats on such an effective double pronged strike.

What is this hullabaloo to you?
thag1.119

I can’t help myself! Too much new vocabulary for one day! 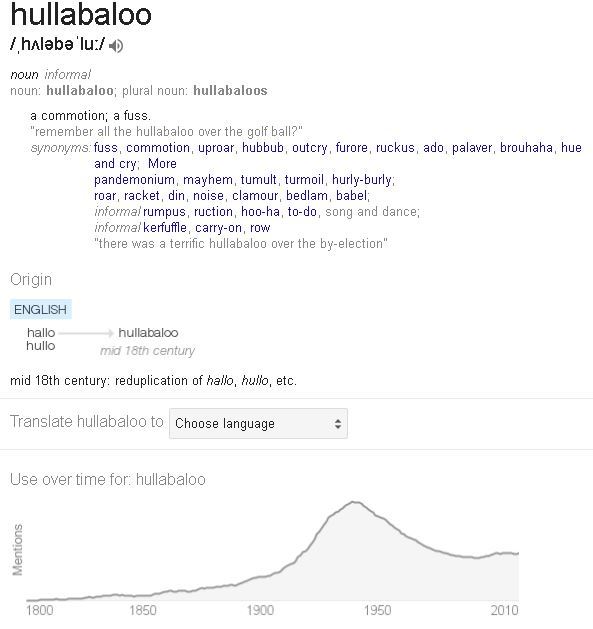 Too much new vocabulary for one day

Guess the pali is biḷi-biḷikā,
Thanissaro translates as chitter-chatter,
Dictionary offers fingle-fangle, tittle-tattle,
With a note on vili-vili-kriyā as sticky-sticky-action.
An elegant translation is then hullabaloo.

Thansissaro, Poems of the Elders

Too much new vocabulary for one day

Guess the pali is biḷi-biḷikā,
Thanissaro translates as chitter-chatter,
Dictionary offers fingle-fangle, tittle-tattle,
With a note on vili-vili-kriyā as sticky-sticky-action.
An elegant translation is then hullabaloo.