How do you use SuttaCentral Voice?

Thanks for the replies.
I have found that most other Pāli pronunciation / recorded sites have a limited number of words and are usually based on the stem and don’t include inflectional endings.
As SC Voice seems to be an automated system, I wondered if it would be possible to type in single words or short phrases and have them read out.
I’m sure this would be a help for student of Pāli out there…

I am also sure it would. But I am less sure if Voice would be the best platform for this.

We had been considering to implement a feature that allows to have read out Buddhist texts other than the content of SuttaCentral. But we discarded this thought because the necessary effort seemed too much, and there hadn’t been anyone interested in such a thing so far.

As SC Voice seems to be an automated system, I wondered if it would be possible to type in single words or short phrases and have them read out.

Absolutely. Voice knows how to pronounce all the Pali in Bhante Sujato’s translations of SN, KN, MN, DN, AN. Therefore, just search for the Pali word directly. For example, here is Aditi speaking nandi: 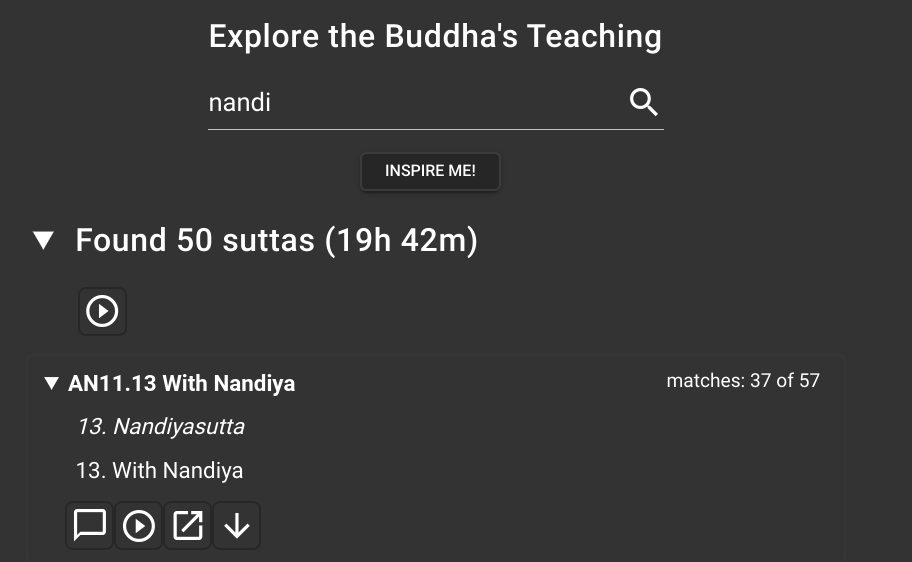 Click the little dialog bubble icon shown in the lower left to hear “Nandi” in the context of “Nandiyasutta”. This is how I use Voice to learn Pali. Once we publish Bhante’s Pali audio, this same technique can be used to learn how Bhante Sujato speaks Pali.

Right… the feature is already there actually… !

I think it’s 99% there, although Voice may not have Pali found in the Visuddhimaggha (e.g., Bhaṅga).

We had been considering to implement a feature that allows to have read out Buddhist texts other than the content of SuttaCentral. But we discarded this thought because the necessary effort seemed too much, and there hadn’t been anyone interested in such a thing so far.

I (among others) have suggested that SC have the possibility of pasting in Pali or Chinese to get the hover-over translation: Pali and Chinese lookup by pasting?
Perhaps, if this in implemented, the text could also be fed into the Voice engine.

Your suggestion is feasible. Anagarika Sabbamitta is the Voice Product Owner. Perhaps you might work together to define this feature?

Thank you for the suggestion. We still have to think about how this can be implemented, but just created an issue to start with.

Sutta Meditation: Create playlists from SuttaCentral Voice with Silences Between the Suttas The Watercooler

Continuing the discussion from SuttaCentral-Voice 2.0 released with new segmented German translations: [victory over mara] Sutta Meditation v0.0.1 is now available! It allows you to make sutta playlists with intervals of silence in-between—which can be used for meditation, reflection, or to simply listen to the silence. https://colab.research.google.com/drive/19Lvq5C2nyrMKQCTwfAWGEghNnbVGaa6w (Note: Google may ask you to log in.) Let me know if anything is unclear or doesn’t work!


Thank you so much for this, @Robbie, this is a great addition!

I am linking it to this thread which is linked to the SC-Voice Wiki.

Soon (hopefully) it will be possible to select Bhante’s voice as an alternative to Aditi directly in the Voice settings.

Try this! Go to settings and select Bhante Sujato’s voice. Right now we have SN 1 and SN 2.1-20, both Pali and English.

Suttas that haven’t been recorded will be played with Aditi’s voice for Pali and Amy’s for English when Bhante Sujato is selected.

Let’s continue here from this discussion:

That’s a good idea too, but I meant a survey that readers/listeners could fill out to give input on their feature ideas. A way to get input, since many users likely are not on discourse or providing feedback proactively. I’ll stop here so as not to distract from the main thread, thank you OP for spurring ideas!

Ah, that’s what you mean! Thank you for the suggestion.

So far we have an invitation for feedback on the accompanying website to Voice, About Voice, which is linked to if you click the “i” button in the upper right corner of Voice. The feedback invitation leads to this thread here on D&D, and for the German version there’s still an email address for feedback.

But it is rarely used, so maybe we should make it more prominent.

So, I finally installed scv-bilara and did my first search The slowGrep really is living up to its name… I’ve waited for 15 minutes already… Any ideas?

I don’t know … I don’t have very fast internet, but I’ve never waited that long.

This gives me 14 results within a second!

There is no need to add -tc:sutta, as this is what it does by default if no other tipitaka category is specified.

And I’ve never tried out -ll info, which seems to give you a whole lot of information (which I normally don’t need).

What happens if you just type scripts/search root of suffering?

What happens if you just type scripts/search root of suffering?

Hmm, that’s definitely not enough. I really don’t have the skills to advise you any further. Maybe something with the installation didn’t quite work out. I am lacking the background knowledge for these things. Hoping that Karl has some idea.

Wow. That is quite unexpected.

Hypothesis #1: dependencies are not as expected

Scv-bilara downloads about 1GB of data, so let’s check your data:

This data must be downloaded initially for offline use. It is immense and comprises the JSON Tipitaka. Since the English version is stable, you’ll rarely need to update that information. In contrast, German uses will need to scripts/search --sync regularly. Updating or initializing Tipitaka information can be quite time consuming (with a blank screen). The messaging for data updates should be better.

I am actually using scripts/de-search --sync. It says there’s an error, but does update nevertheless.