How Early Buddhism differs from Theravada: a checklist

Yea, and it’s already being accused of being white washed pseudo-Protestant analysis.

In the Suddhodana as king section:

But the model of leadership was quite different from the idea off an absolute, inherited monarchy that is implied by the idea of a “king”.

Thank you, Bhante, for once more coming through with a solid bit of clear thinking that cuts through to the essential!

Bhante, this is great. A little too long for me to read on screen though…

Sadhu! This is an important essay, and thank you for writing this. It should be required reading for those invested in Buddhism, and I might suggest that it be submitted for publication, or example, in Tricycle. Readers of Tricycle will likely push back out of need to protect their territories, but these words from Bhante are important to remember. What the Buddha Taught really does count for something, and much of both Eastern and Western ‘Buddhisms’ have conveniently forgotten the Dhamma, or chosen to ignore it, or willfully misappropriated and distorted it for commercial or other reasons. 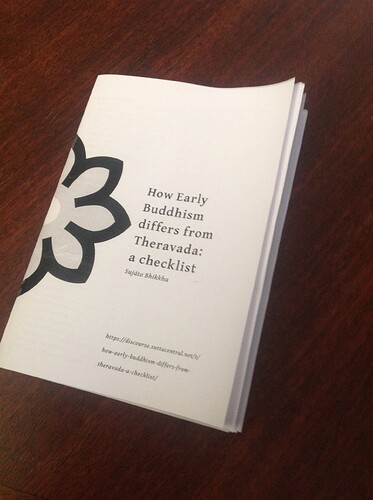 I have only spent a few hours typesetting this at this stage. However, if people are interested, then I am happy to collaborate.

My feedback is that the US spelling hurts my eyes

Wow, Ayya thanks for doing this! I am off to Thailand again this next week and will print out and distribute…this is wonderful that you took the time and effort to do this!

The following is the quotation, in Chapter 10, Section 4, from the book The Formation of Early Buddhist Texts by Ven Yinshun:

I have thought of doing something similar, maybe wait a little until it matures. I’ve recently been using pandoc, you can convert to PDF via LuaLaTeX and also to EPUB, super easy!

Oh, also, best take off the SuttaCentral branding, this is just my personal opinion!

Can you translate what the quotation said? Because I believe most of users here can’t read Chinese, including me

The Chinese text, as stated previously, is about the formation of early Buddhist texts, from SN/SA (or 相應教 Saṃyukta-kathā) gradually developed and expanded to MN/MA, DN/DA, AN/EA. The SN/SA has three portions (Sutra, Geya, and Vyakarana angas); the Sutra-anga portion was the earliest of the three. The Sutra collections of Early Buddhism include SN/SA (originated at the first council) and MN/MA, DN/DA, and AN/EA (originated at the second council, one hundred years after the death of the Buddha). SN/SA represents the situation with regard to the compilation of the Buddhist teachings shortly after the death of the Buddha. MN/MA, DN/DA, and AN/EA represent the Buddhism of the period just before that second council. SN/SA was thus the foundation of the four nikayas/agamas, based on the Sarvastivada tradition of the Vastusangrahani of the Yogacarabhumi , according to Ven. Yinshun.

I’ve updated the files to not have SuttaCentral branding. Happy to work on this further when the time is right.
I’ll keep in mind Pandoc. It won’t be long until my 10 year old macbook air will not be supported by the world and I will then MacBunto it. However, that seems like way too much ‘letting go’ for me right now!

see pandoc’d version above! Thanks for the inspiration.

If we were to frame this difference in terms used by the later tradition, reading Analayo one would think this refers to vipassanā samādhi (the state of mind of one doing vipassanā meditation), whereas in fact it refers to lokuttara samādhi (the state of mind of one who attains the Dhamma). These phrases are, once more, talking about a level of absorption that is not before jhāna but beyond jhāna.

I may be being a little thick here, but does this imply that the formless attainments were not included in the EBTs?

does this imply that the formless attainments were not included in the EBTs?

It’s not at all a thick question, and there are indeed those who would argue that the formless attainments are not included in the earliest teachings. To be clear, they are found, very widely, in the EBTs, and I disagree with the arguments that they are a later addition. Still, there is no doubt that the four jhanas are the central aspect of samadhi in the EBTs.

In the case, however, the distinction was made with lokuttara samādhi, which is quite different from the formless attainments.

The lokuttara jhanas are not really described as such in the EBTs, although there are a number of passages and references on which they are based. It seems that originally the idea was simple, and was established to distinguish between Buddhist and non-Buddhist practitioners of jhana.

Someone practicing jhana without right view (from the Buddhist perspective) has an experience of bliss and freedom, and after death will likely abide in a dimension of corresponding bliss. However this is not permanent and after some time they will return to this world or even to lower realms. This kind of samādhi is therefore regarded as lokiya “worldly” or “mundane”, but what it really means is “bound to the world”, i.e. “subject to rebirth”.

In contrast, one who, grounded on right view, realizes that same state of mind that we call jhana, will, due to the combined power of their samadhi and wisdom, break free of the chains of rebirth and find freedom. This is called lokuttara “beyond the world” or “transcendent” samādhi.

Over time, this distinction became more tightly constrained, as is the wont of the Abhidhamma, and the lokuttara samādhi was felt to be confined to, not just any jhana practiced by one of right view, but certain specific “mind moments” that occur on the occasion of realizing the noble paths and fruits. The path moments occur only once, as their function is to destroy the fetters, but the fruition moments may be re-entered in meditation by a practitioner. Certain descriptions of mysterious states of samādhi in the Suttas are said to be about such fruition attainments, especially for the arahant.

Someone practicing jhana without right view (from the Buddhist perspective) has an experience of bliss and freedom, and after death will likely abide in a dimension of corresponding bliss.

Is the fourth jhana reaching the end of the world? The world we construct in our heads, that is.

The world is our six senses.

End of the world is when one is at peace regardless of what one sees, hears, smells, tastes, contacts and thinks.

It is reached through calmness and wisdom.

Thank you, Venerable Sujato. This list is quite helpful!

To question elders is, among some Theravadins, regarded as an inherent sign of spiritual malaise and ingratitude.

This is the sad reality not only of Theravada, but also of other buddhis traditions. Many times I thought: “okay, the Buddha said it is okay to question whatever he taught, but the message now is that it is okay to question as long as I reach the same conclusions and accept what is in the scripture or what has been said by the teacher as true.”

At the same time, I think our way of exploring Buddhism is quite influenced by our modern culture, such as the values of protestantism (individual direct connection with God, understanding the scriptures for oneself individually, etc.) and I wonder what the Buddha would have to say about that.

The world is our six senses.

End of the world is when one is at peace regardless of what one sees, hears, smells, tastes, contacts and thinks.

It is reached through calmness and wisdom.

I think that what you are describing is life after the “release from suffering”, command of the entire eightfold path.

I think there are sutta that says first Jhana is a sufficient condition for release of suffering. Entering the proper first Jhana means one has the wisdom to go beyond clinging onto sensuality. Based on the same principle, one can transcend self views, conceit etc to reach the end of dukkha.

Of course this topic is very controversial but that is my reasoning.

I think there are sutta that says first Jhana is a sufficient condition for release of suffering.

The first jhana is a basis for ending the defilements.’ That’s what I said, but why did I say it?

Take a mendicant who, quite secluded from sensual pleasures, secluded from unskillful qualities, enters and remains in the first jhana. They aware the experience there—included in form, feeling, perception, choices, and consciousness—as impermanent, as suffering, as diseased, as an abscess, as a dart, as misery, as an affliction, as alien, as falling apart, as empty, as not-self.

They turn their mind away from those experiences, and apply it to the deathless: ‘This is peaceful; this is sublime—that is, the stilling of all activities, the letting go of all attachments, the ending of craving, fading away, cessation, extinguishment.’

I think there are sutta that says first Jhana is a sufficient condition for release of suffering.

The conversation with @sujato was about EBTs. In that he said:

In the EBTs the samādhi that is essential for the path is always defined as the four jhānas. Samādhi in the EBTs is a profound unification of mind that is the result of a dedicated process of letting go and spiritual development. Occasionally, it is true, samādhi is found in a slightly broader sense, but these cases are never central to the path.

I suspect your quote is later tradition. I am interested only in the EBTs here. So the fourth jhana is essential in the Bhante’s words. It is also the most likely state to qualify as “reaching the end of the world” which must be an extremely profound state.

We as sentient beings construct an inner self centered world with things in it that we crave and where unsatisfied craving is suffering. I think that in my quote reaching the end of the world is the realization by direct experience of the destruction of that inner world. I believe this would be the most profound insight imaginable.