How Early Buddhism differs from Theravada: a checklist

Thank you so much Banthe for that. Let’s focus on abandoning the five hindrances instead of trying to achieve something in meditation.

Honestly, I find the constant bringing up of this issue so spiritually decadent. When did we start treating jhanas as a problem? When did we start defining our spiritual path by what we can get away with instead of what we can aspire to? It’s not just a passage or a citation, it’s the whole way of thinking about spiritual practice that’s just upside-down. The Buddha was always calling us to aspire to let go of more, to reach higher. Instead we’ve been trained to approach Dhamma practice like a lazy schoolkid, doing the absolute minimum to avoid an F in the exam.

Anyway, I’m dragging the thread in an off-topic direction with this

But just to continue the dragging a little more, I just checked another detail this morning.

In his essay, Analayo notes two places where the Pali defines right samādhi as the four jhānas, but the Chinese parallels defines it differently. He takes that as his starting point to develop an argument that we don’t need jhānas for stream-entry.

Fun fact, in neither of those two places (SA 784 and MA 31, which we can now read on SC thanks to Charles Patton!) is right mindfulness defined as the four satipatthanas. So are we now to develop a whole argument that we don’t need satipatthana to get enlightened?

Added sections on “bare minimum” and “pattidana”. Another on “monastics and money”.

The definition of Early Buddhism and EBTs is not entirely the same as Ven. Yinshun:

All extant EBTs are sectarian. However, their essential form (structure) and content, recognised in common by all schools of Sectarian Buddhism, were certainly established in the period of Early Buddhism.

Early Buddhism contains both the first and second councils (before the first schism of the Sangha into two main branches, Mahasanghika and Sthavira).

SA/SN represents the situation with regard to the compilation of the Buddhist teachings shortly after the death of the Buddha.

MA/MN, DA/DN, and EA/AN represent the Buddhism of the period just before that second council.

For the studies in Early Buddhism/EBTs, it will be better to see clearly and respect the differences and similarities between the divergent, non-identical texts and traditions, particularly between SA/SN and other versions of literature in Buddhist history.

The SA/SN collection itself also contains three different classifications/angas. Ven. Yinshun sees the gradual formation of SA/SN as corresponding to the three angas formed in sequence (the sutra-anga portion was the earliest of the three).

Fun fact, in neither of those two places (SA 784 and MA 31, which we can now read on SC thanks to Charles Patton!) is right mindfulness defined as the four satipatthanas. So are we now to develop a whole argument that we don’t need satipatthana to get enlightened?

I intended to stop (my heart is no longer particularly in this) and I’m not going to argue this much more, but to answer your question: yes, I would feel that such an argument should be developed and explored if the description of right mindfulness as the four satipatthanas was confined to a handful of occurrences in the canon, particularly if the corresponding parallels didn’t match that well. Otherwise, probably not.

Perhaps the essay above should mention the often-overlooked-by-Theravada commentary in the Vinaya (Vin-a 1.45), upon which authority of the Commentaries and Abhidhamma are held in check (by the EBTs, the 4 great Standards/References): 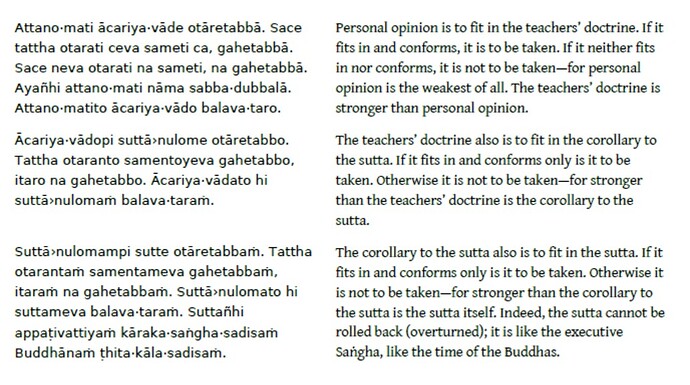 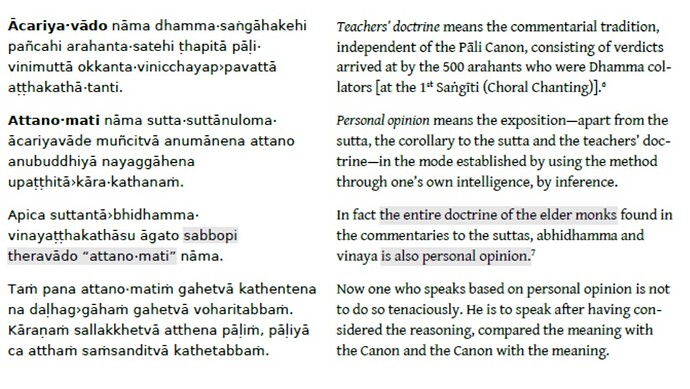 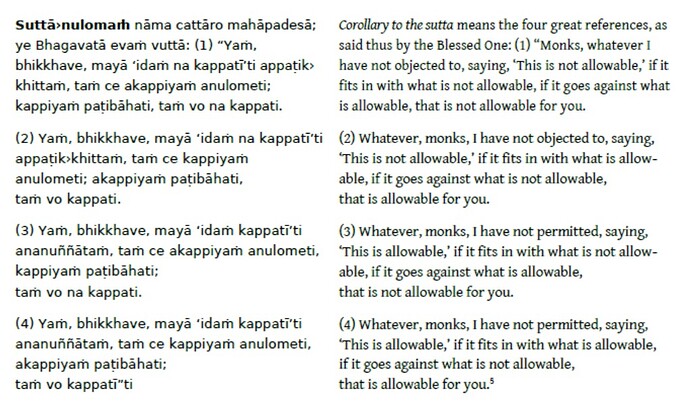 Credit for those translations above belongs to Bhante Aggacitta of Malaysia. Here’s a summarizing chart I drew, for these “Dhamma Collators”: 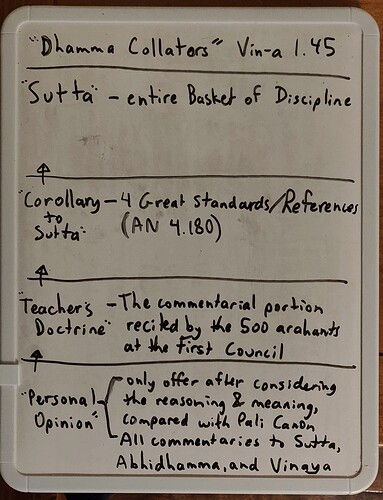 I further discussed this material at length in an interview with Bhante Ariyadhammika of Sasanarakka here:

a large collection of antique cars

Omg, I hadn’t heard about this before: 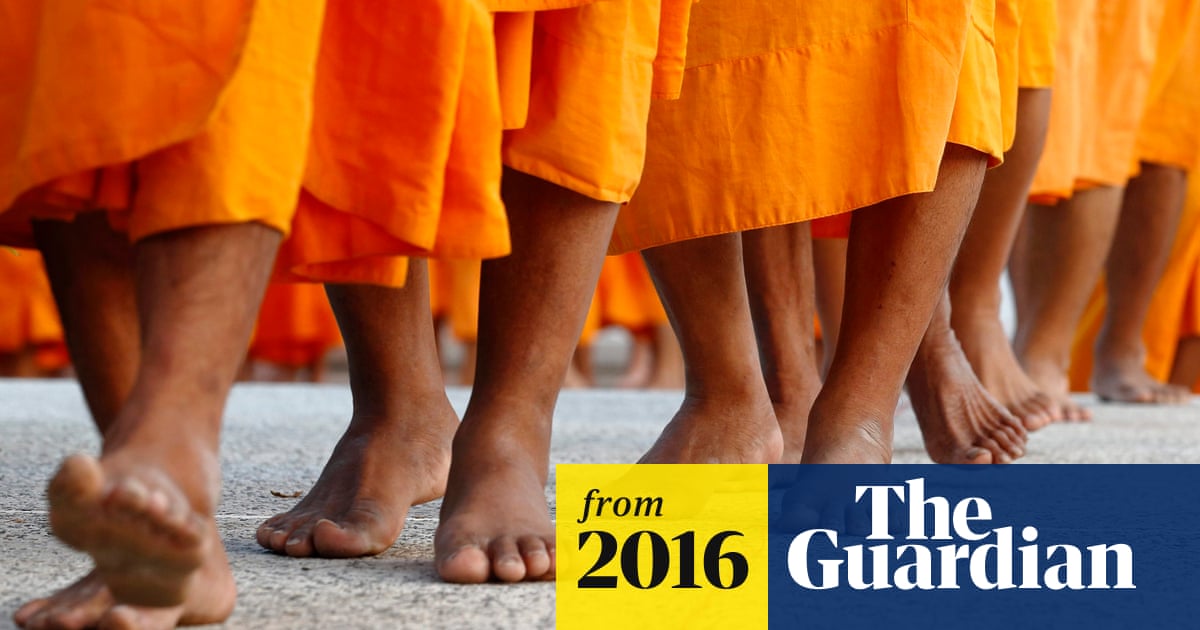 the often-overlooked-by-Theravada commentary in the Vinaya (Vin-a 1.45), upon which authority of the Commentaries and Abhidhamma are held in check

I’m unclear of the distinction between ācariyavāda as “the commentaries made at the Councils” and “personal opinion” also being what is in the commentaries according to the “theravāda”?

Judging from the usage later, it would seem that this passage is using “theravada” in the sense of the “tradition of teachers”, as is discussed lower down under Ācariyaparamparā.

Tradition tells us that Siddhattha was motivated to go forth by the unexpected sight of four signs, from which his father had tried to hide him: an old man, a sick man, a corpse, and a renunciate

In Mn26, this was mentioned as his motivation.

The Search for Enlightenment

The takeaways I saw, based on my understanding, go like this:

What’s so unique and super juicy here is that these “Dhamma collators” are internal to the Pali Canon itself. Virtually all scholarly criticism of the Abhidhamma, etc (by Western academics, historians, archeologists, linguists, scientists, philosophers, logicians, people posessing common sense, etc), no matter how well logically founded it is, is not liable to gain much traction with staunch conservative Ethnic Asian Theravada monks, because they need to hear arguments couched within the Pali Canon’s own internal logic, as the Pali Canon’s contents contain the only logic which they feel they have any recourse to. Well, these Dhamma Collators are just such “internal logic”, which they will be powerless to turn aside, with a blithe, obstinate dismissal.

Good monks to offer further opinions on this are Bhante Ariyadhammika of SBS, Taiping, Malaysia, and Bhante Aggacitta, of Malaysia. Their scholarly powers of Pali study exceed mine.

just such “internal logic”, which they will be powerless to turn aside, with a blithe, obstinate dismissal.

In my experience so far in Thailand, monks without any logic still have an impressive supply of bluster

At the end of the day it’s about power, not logic.

One who “enters the stream” is one who has completed all eight factors of the noble eightfold path, including jhānas.

A Sotapanna can be said has all eight factors up to certain achievement, but not yet perfected/completed.

Indeed in EBT that is non indication that a Sotapanna has a capacity in Jhana (see about Mahanama, Nandya, Sarakhani… etc.) 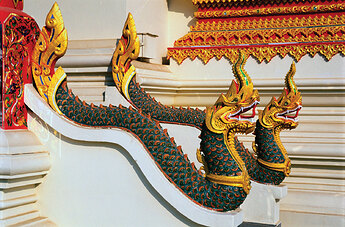 In Mn26, this was mentioned as his motivation.

Yes, I should probably put that in there too. (edit: done!)

because they need to hear arguments couched within the Pali Canon’s own internal logic,

Don’t you mean, “within the Theravada tradition’s own internal logic”? There are plenty of things in the Suttas that speak to the priority of the Suttas over other opinions, including commentaries.

But I still don’t see why the Theravada tradition would see some commentaries as created at the Council, and others later?

At the end of the day it’s about power , not logic.

Well yes, but one might imagine a subset of monks who are convinced by the logic that they know, i.e. the commentaries.

One of the problems is that in such matters, logic is usually employed to reconcile new facts with existing views. It takes a critical mass to precipitate a new perspective, and such things rarely happen outside of a broader existential crisis. Reason works, but only for those who are ready to hear.

mediocre in samadhi and pañña

Once again, I can only recommend my book A Swift Pair of Messengers where I look at all these cases and many more.

Yes, I should probably put that in there too. (edit: done!)

Dear Bhante, the original sutta was beings subject to birth and not rebirth:

This may seems trivial especially many Buddhist believe in rebirth. However, as a motivation to renounce, it may be better to stick to the original words.

Birth is something that the Bodhisattva can comprehend whereas rebirth would require beliefs until he gained psychic power. As the starting point of Bodhisattva’s journey, it seems to me that the real world experiences was what caused samvega to arise in him rather than beliefs. Thus, I strongly recommend birth rather than rebirth.

Bhante if jati is rebirth. How can one can achieve non returner and arahant (perfected) at this current life?

Also how can a non returner know that they won’t return to this world anymore such as Citta the householder? The EBT described on SN 41.9 and many more such as Hatthaka of Alavi etc.

If I pass away before the Buddha, it wouldn’t be surprising if the Buddha declares of me:

”The householder Citta is bound by no fetter that might return him to this world.’”