How far is the Buddha to be believed?

I would like to offer a short story. It is very simplistic, I know, and for this I apologize. But I am hoping tol illustrate how fine the line is between what is fantasy, and what real…

Then one day, to this primitive race, arrives a traveller who declares: "Far, far beyond the boundary, journeying onwards for a thousand leagues, traversing great mountains and plains and mighty rivers, one eventually comes to the end of all land. And there, I declare, one witnesses for oneself the great waters of ‘the Ocean’. This Ocean teems with unimaginable creatures, some of them hundreds of feet in length. Furthermore, there is a race of beings that exist there. Many of them dwell in mighty palaces that appear slender, yet reach upwards into the sky. They fly through the air, many of them together, like seated birds at leisure. They communicate with each other across inconceivable distances by using flat slates, on which they draw shapes with their fingers, so that what is written here appears there, and what is written there appears here. They are able to talk with one another plainly, even though they cannot see one another face to face. For those who wish to know this Ocean, and who wish to see with their own eyes these miraculous beings, follow me and I will guide you every step of the way.”

Now, is it not clear that to these primitive people the statements made by this traveller would appear utterly fantastical, indeed seeming impossible to the point of disbelief? How can land come to an end? How can palaces stretch upwards into the sky? How can beings travel like seated birds? They communicate through the air by drawing their fingers on slates?!

It would indeed make sense for these primitive people to treat this traveller with a healthy dose of scepticism. He may very well be a charlatan, or a robber, or a fraud. With this in mind, they should not jump to any rash decisions. They should observe him - impartially - for a good length of time. They should consider carefully his demeanour, his actions, his habits, his mental perspicuity, his goodwill.

Naturally it would come to be amongst this primitive population that many would discount the traveller’s claims as false. They would declare: “Such things are obviously impossible. Only a fool could believe.” Then there would be others who, observing the traveller’s clearly beneficent nature, and intelligence, would decide: “Though I am unable to believe his ridiculous claims, yet I will follow him just to see where it leads.” Finally, there would be the those who, having observed the traveller for a long period, would come to marvel at his self-control, his unwavering equanimity, his commitment to truthfulness, his compassion, and his intelligence which seems deep. They would declare: ”This man shall be our guide. We will follow him. And whatever he declares, having trust, just such shall we believe, and deem to be true."

Now, amongst those people - who having gathered to go on the journey - many would begin to make theories as to what the ‘ocean’ might be, and how the palaces might be built, and how it is that ‘slates’ could work to communicate through the air. Many would still proclaim that these things do not exist at all, but have only been offered by the traveller as an incentive. But here the traveller explicitly declares: ”Good people, everything I have told you is true. However, do not waste any time or energy in considering these things. Do not bother to conceive ideas about them, nor hanker after any such ideas, nor cling to any theories about them as true. Let it go! When the time comes, then you will see all these things for yourself."

Amongst the group of primitives gathered for the journey, there would be some who would take the Traveller’s words to heart. They would consider: “I have faith in him. I believe what he says is true. And just as he advises, I will let it be! I will not give these things any further undue thought.” Then there would be others who proclaim: “I believe what the Traveller has said is true, but I will continue to make conjectures and theories about those things.” Lastly, there would be those who say: "I will follow this Traveller because he appears a good man, but I do not believe that what he has said is factually true.”

Now consider, these fantastical things are, in fact,most decidedly true. Most certainly we do fly, and in this very moment we are reading these words - miraculously - on a type of slate. But I digress…

They begin their journey.

The answer is this:

Those who believe but do not fixate follow on silently. Their faith in the guide is complete. When he tells them to wake up early, they do so. When he tells them to drink but little they accept his command. For these people, the journey is something mystical, miraculous, wonderful. They do not enter into arguments. They travel in peaceful accord. And their minds are open to whatever experience may bring upon them. As far as it is likely to reach journey’s end, these beings are most likely to realise the goal.

For those who believe, but yet continue to theorise, the journey is harder. They begin to form fixed ideas about their ultimate destination. Thus, they engage in arguments along the way. Arguing and discussing they miss much of the scenery. Their minds are troubled. They enter into fights. Some of them, based on their own fixed conceptions, begin to doubt the validity of what the Traveller has to say.

Finally, there are those who are merely walking on the path without truly believing. These are the least likely to attain to the goal. Not only do they constantly enter into arguments and fights with the others, but at many times they doubt the validity of the great Traveller wholesale. When they are told to drink little, they declare: “I will drink what I like.” When they are recommended to conserve food, they think: “but there is here plenty to eat.” Until finally, after wandering for many a day, when the Traveller informs the party that “here we will journey for a long time through a dark tunnel, but do not be afraid,” they insist that he is mistaken, that it is dangerous, and so go on to find their own way.

What seems impossible is only that which has not yet been experienced. This very world of ours today is like a fantasy which a mere hundred years ago would have seemed impossible to the point of disbelief.

How far is the Buddha to be believed? Our faith in him should be complete. Yet just as he advised, we should not fixate on the seemingly miraculous, nor give it any undue thought. For a mind which does not cling to preconceptions, the true nature of experience is more easily perceived.

With love for our Guide, the Teacher, the Buddha.

There are more things in heaven and earth, Horatio,
Than are dreamt of in your philosophy.

Such people are still around ( I understand that you meant this in a lyrical sense ). 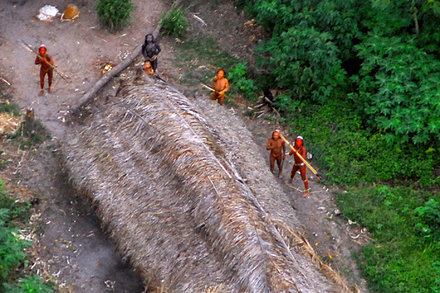 Investigators are looking into reports that around 10 tribe members died when they were set upon by gold miners.

I like this a lot, but one thing I must say, there is a difference between this analogy, and instead an already advanced civilization, and say an even more advanced civilization. That is closer to the truth of the situation and makes clearer the problems people have with faith. With the already advanced people, they find it even more difficult to trust the even more advanced man, because they can’t help but think that they have uncovered at least most, if not all, of the major foundational aspects of our reality and the way things work. This may not even be the case, but the more advanced a civilization becomes, the more arrogant they become concerning their knowledge of reality. Even now, we don’t really understand quantum mechanics, or how it reconciles with special relativity, we also don’t know how consciousness works and how it relates to things of that nature; and yet, because of everything we do know, we often find ourselves stuck in this ideological fallacy of thinking that all the major discoveries have already been made. Besides the ability for instant gratification becoming more accessible everyday, this era also must struggle with the arrogance of our knowledge, and the illusion of its saturation. I always wondered if eventually we would hit another sweet spot for the Dhamma, where more people will be drawn to it, because we will have become so advanced that we’ll see that there is more to reality than we know, that and along with the pali canon becoming so accessible with the rise of the internet and whatever future technologies will assist in learning and understanding it. It seems that right now, our advanced science, technology, and knowledge is more of a hindrance than anything else. Not counting the internet of course, only because I would have never found the Dhamma without it.