The story of Kisagotami is relatively well-known by Buddhists. 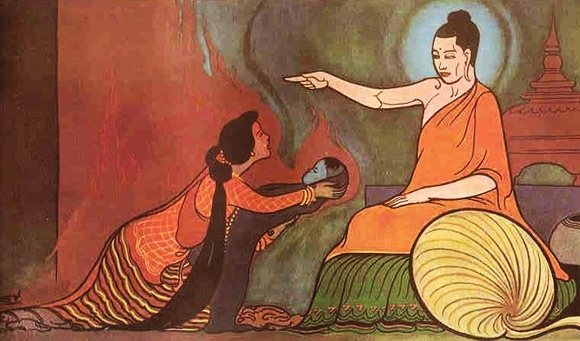 A young wife craves for a child, and after many years she gives birth to a son. Can you imagine her joy to have a son, after waiting for so many years? And can you imagine her relief from all the pressures that women faced in marriage to provide children, especially a son? But her child died when he was still a baby, and the grief was too much for her to bear. She wouldn’t give over the child for cremation, but carried him with her, saying “no, my child is just asleep”.

Someone suggested she go to see the Buddha, perhaps he could help her. And she laid her son at the Buddha’s feet, begging him to do something for her child. He understands the teaching she needs. He tells her he will help her, and asks her to fetch a mustard seed. The seed must come from a house where there has been no death in the family.

So she goes, from house to house, begging for a mustard seed to save her son. People are only too willing to help her, and then she asks, “has there been any death in the family?”. Of course she cannot find any place where they have not experienced such loss. In this way Kisagotami learns the universal nature of suffering. All of us must experience the loss of those we love. So she takes her son to the charnel ground.

People often tell me about their suffering, and I find that they have different attitudes at different stages. Many become hard around their loss, defend their stories of pain and become isolated. They become convinced that no one can understand, that no one has suffered the same. Some people believe that they somehow brought about their own suffering because there is something wrong with them, their suffering becomes a locus of shame. Others come to understand that their suffering is a part of life, and their grief brings them into community, into humanity.

When Kisagotami comes to the Buddha with her baby, he doesn’t give her a discourse, he doesn’t ask her to observe, or to let go. He doesn’t instruct her to use a meditation method, or give her philosophy. He gives her a practical way to relate to her pain and to accept the truth.

Firstly, she must physically embody the search for a place without grief — this act of embodiment is important to bring reality into stark relief. Next, she must relate, she has to speak about her suffering, to honour her loss. And then she has to listen, over and over to the suffering of others, until she resonates with a field of compassion that is able to hold us all. This template of embodying, relating, and listening is a way that we can learn to be with suffering, our own and others.

When Kisagotami’s returns to the Buddha, she has touched suffering directly and is no longer trying to escape. While the Buddha is speaking to her, she sees the Dhamma— she attains the first stage of enlightenment. And she asks to join the community of nuns.

Later Bhikkhuni Kisagotami became fully awakened, an Arahant. There is an account of her in the Samyutta Nikaya, the connected discourses with Bhikkhunis. She speaks with spiritual authority, and demonstrates how, as a nun and as an awakened being, she transcends the traditional roles for women.

Bhikkhuni Kisagotami is meditating in the forest when she is approached by mara, who wants to arouse fear in her, he says

Why now, when your son is dead,
Do you sit alone with tearful face?
Having entered the woods all alone,
Are you on the lookout for a man?

Kisagotami realizes this is mara, and responds (note the sass!)

I’ve gotten past the death of sons;
With this, the search for men has ended.
I do not sorrow, I do not weep,
Nor do I fear you, friend .

“Delight everywhere has been destroyed,
The mass of darkness has been sundered.
Having conquered the army of Death,
I dwell without defiling taints. 1

Kisagotami’s story invites us to look beyond appearances, beyond the present circumstances, beyond what we think we can bear, to discover the heart is boundless. In the midst of great insecurity, just knowing that our suffering isn’t personal, or based on some kind of personal fault gives us courage. When we integrate and overcome our loss and grief, we also become a source of strength for others. The Buddha’s teaching was not limited to solitary and silent practice; it was also based in community and relationship. This wisdom is something we need to be whole.

unfortunately no link is visible

(embroidered the topic title with sutta reference for posterity)

. I think the link should work now.