How to reach the jhanas, according to Pannananda

Pannananda says that without these 3 steps, we will not be able to concentrate enough, and our progress will stop. He also says that this technique is in accordance with what the Buddha did.

1/ The first is to focus (briefly) on non-conceptual breath (this step is supposed to get us to the upper lip area; and we need to find that area because it makes it easier to focus).
Once we have found the upper lip, we move on to the second step.

2/ The second step consists in observing the localization (the upper lip) as if we were a spectator standing behind the upper lip; it’s hard to explain in words, but basically the idea is that we have to observe the localization by pretending that our eyes and our gaze are not at the level of the physical and biological eyes and gaze, but are a few centimeters behind the upper lip, as if we had eyes in our mouths. To understand, look at this image, it comes from Pannananda’s article : 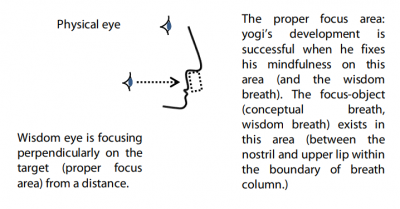 3/ The third step consists of focusing on the conceptual breath, always pretending that our eyes are a few centimeters behind the upper lip.

What do you think ? Thanks in advance.

For the sake of all beings.

I’m not sure.
Thank you for your quick response…