How would you say “depth” and “depth perception” in Pali and in Chinese?

Question is in subject line.

Added later: also how would you say “distance” and “perception of distance”?

Added later still: I want to see if the Buddha ever discussed depth perception or something like it.

I want to see if the Buddha ever discussed depth perception or something like it.

Yes, progressive spatial expansion is explicit in the subjects in Majhima Nikaya 121, from human society, to wilderness, to a view to the horizon and then to boundless space. In the Vism. are described the methods for developing meditation on limited (V, 24) and unlimited space.

By depth perception I mean the normal brain process of creating depth out of shading and lines that suggest something trailing off into the distance. I think it could not be formless. Maybe not. Thanks for replying.

By depth perception I mean the normal brain process of creating depth out of shading and lines that suggest something trailing off into the distance. I think it could not be formless.

I think it’s implied and perhaps taken for granted as a function of discernment in a few places in later Buddhist works.

The Yogacarabhumi, for example, divides form into three categories: apparent, shape, and discerned. The category of discerned forms (vijñapti-rūpa) includes actions like “taking, discarding, flexing, stretching, walking, standing, sitting, and lying down” (取捨屈伸。行住坐臥。). Its defined as “a function of discernments based on motion” (業用為依轉動差別, T1579.30.279b14).

The Sariputra Abhidharma includes a much briefer definition of visual form as “the form signs that follow action” (隨行色相, T1548.28.526a26).

They seem to consider motion is a type of form, which would be in three dimensions and involve depth perception.

creating depth out of shading and lines that suggest something trailing off into the distance.

In the modern context drawing from a subject would be an effective way of developing the concentration on limited space. Cezanne was the first to isolate space as a subject in itself, but historically all artists use it as the opposite of form. This sutta also specifies light as a subject, which applies to drawing and painting from a subject:

“The property of the dimension of the infinitude of space is discerned in dependence on form.”—Samyutta Nikaya 14.11

“The property of the dimension of the infinitude of space is discerned in dependence on form.”—Samyutta Nikaya 14.11

If this is so there are big implications here.

PS. Is depth perception the beginning of proliferation?

Correct. The primitive perception of limited space (infinite space is an extension of limited space) is black silhouette against light background, as seen at sunrise. The space in this scene is towards infinite. As the light gradually becomes stronger, shapes begin to develop form, which is dependent on space perception. Tones (dark & light) when contrasted have spatial separation, as do warm (advancing) and cool (receding) colours. The acquisition of the skill of spatial recognition as a concentration subject depends upon a judgment between form and background. As the sutta says, the property of space (both limited and infinite) is dependent on form. It’s first necessary to have a grasp of the perception of form, which is developed by drawing from the subject while simultaneously evaluating its distance from the background by using appropriate tone value. As soon as dark tone is put on the paper immediately a spatial situation appears in contrast with the white. This then is progressively controlled referring to subject. That’s how perception of limited space is strengthened, the same as physical exercise. This shows how whites advance and darks recede, but it’s necessary to do it to experience it, the darker the tone the more recession: 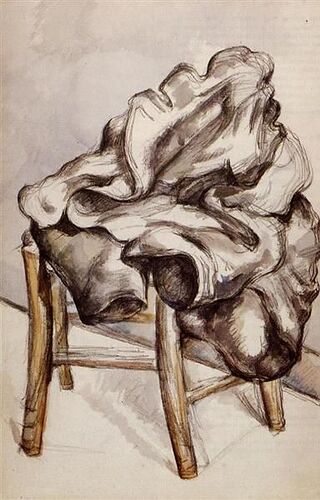 The implications of form and space depend on recognition of the duality between conventional and ultimate reality, that development of skill in spatial & form perception is part of the conditioned path, a necessary precedent to infinite space.