Just now from a coffee shop in Chiang Mai I’m observing the Meridian Hotel celebrating its nine year anniversary in Chiang Mai. What’s interesting is that one of the managers told me that early this morning the monks came for their alms round and now the employees are offering flowers and other items to a Hindu god. 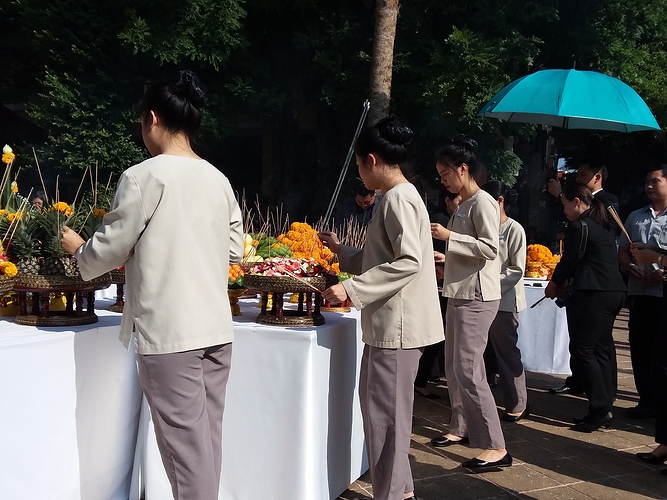 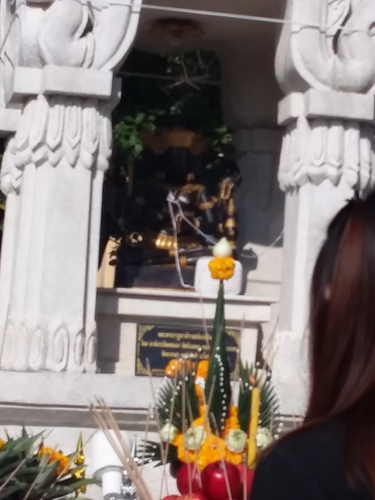 It’s an interesting aspect of Thai culture this element of devotion to deities not necessarily found in EBTs.

I just feel sorry for the way that the heterodox branches of the Sangha (usually linked to the Mahanikaya fraternity) materially exploit the laity’s adherence to hindu-like devotion to contemporary Indian pantheon.

now the employees are offering flowers and other items to a Hindu god.

Do you think as a buddhist is it wrong to offer to Hindu god ?

Chinese neighbors next-door (Mandarin Chinese) – today we learned they don’t do Halloween “trick-or-treat” for the neighborhood children “because they’re Buddhist” (affiliated with the 10,000 Thousand Buddha’s institution up in Northern California).

Strange… the kids coming around like monks with alms bowls…

My guess is that attitude is more Chinese than Buddhist.

Do you think as a buddhist is it wrong to offer to Hindu god ?

On one hand, the people I encountered were lovely. The weather is beautiful, and the English gentleman I spoke with from the Meridien was friendly, and spoke of the positive spirit of the celebration. So, I can’t knock the energy or the enthusiasm.

On the other hand, the first thought that came into my head when I saw this from across the street was from a youtube by Bhante Sujato, who mentioned speaking to another monk years ago, that had visited Thailand. The quote was " a lot of Buddhism in Thailand, but not much Dhamma."

I wonder how prevalent this is in the area. In the South, Hindu deity worship is really strong; often the temples have such a mass of Hindu gods that it’s hard to find the Buddha! But I can’t remember it much in Chieng Mai; perhaps its creeping north?

On the other hand, the north has its own long tradition of colorful worship, especially the Upagupta cult!

And this in Myanmar: The nats (နတ်‌; MLCTS: nat; IPA: [naʔ]) are spirits worshipped in Myanmar in conjunction with Buddhism. They are divided between the 37 Great Nats and all the rest (i.e., spirits of trees, water, etc.). Almost all of the 37 Great Nats were human beings who met violent deaths (စိမ်းသေ, lit. "green death"). They may thus also be called nat sein (နတ်စိမ်း; lit. green spirits). The word 'sein', while meaning 'green', is being used to mean 'raw' in this context. There are however two types of nats in ...

The quote was " a lot of Buddhism in Thailand, but no much Dhamma."

Reminds me of a very famous quote by a great religious reformist called Muhammad Abduh (d. 1905): “I went to the West and saw Islam, but no Muslims; I got back to the East and saw Muslims, but no Islam.”

Interesting, I live in an area that is a Vietnamese/Chinese neighborhood and we hear the same things from the kids-- mom and dad don’t want the kids out on Halloween. I think they believe it is something like “ghost month” and in some way dangerous (to be fair, nobody really trick or treats in most of Oakland anyway). They usually are Buddhist of some variety.

Just came across this story. 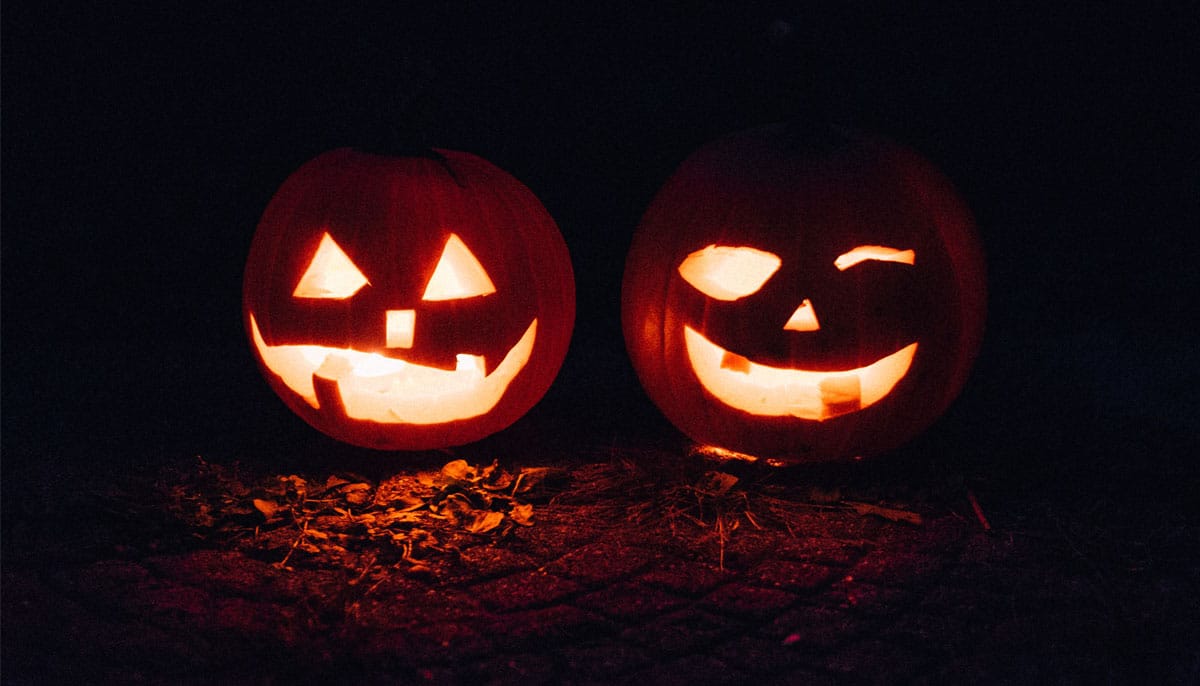 To me this shows that cultures in Asia (as in the west) incorporate influences from all kinds of different origins. To me, it’s just part of a colourful cultural milieu. I’m reminded of Ajahn Brahm’s question that he applies to just about everything:
“What do you expect?”

I have a fantasy that I entertain whenever I am in Chiang Mai, to muster the funds to rent a space in the Old City, and have a space for meditators, and bring in as I have done before in the US a large monitor and live stream the BSWA talks and Sutta classes, and replay from youtube via a Roku the Vens. Brahm, Sujato, and Brahmali talks. Just to have a place in CM that farang visitors can drop in get some real Dhamma. Set aside an hour after the video talks for people that want to stay a while and talk.

That’s be a great idea. Why don’t you talk to Annette, I’m sure she’d love to help out.

As an add on to the OP, here’s a photo of the Maya Lifestyle Mall, in the Nimman area of Chiang Mai. I stopped in this mall after a day at Wat Umong, just to see it. I lasted about 5 minutes…the sheer energy of consumption, luxury, and consumer hype is overwhelming, with more affluent Thais walking about with their Adidas and H&M bags.

At the entrance to the “Maya Lifestyle Center” is a shrine to Ganesh. No Buddha to be found. I guess that the idea of mindfulness and renunciation does not go well with a “Lifestyle Center” for wealthy Thais and westerners in Chiang Mai. 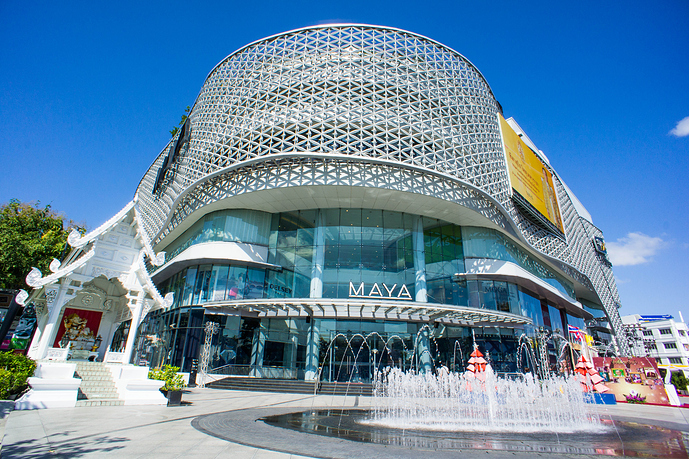 A great idea, Bhante! Thanks and it’d be nice to catch up with her again. As you know, she considers you as family, and I’ll bring her your big hello if I can see her while I’m in CM. I’m off to Wat Pa Tham tomorrow and then to Koung Jor refugee camp, but will be back for a day or two in CM.

And one has to ask, is it just me, or is the pun deliberate? The “Maya mall”? Surely it can’t be an accident?

One time many years ago I was in Sydney, and a visiting Thai monk was there. We went for dana at the home of an extremely wealthy devotee. She had a huge mansion in the most expensive suburb of Sydney, adorned with, among other things, huge glamour shots of herself modelling with sports cars. Anyhow, we happened to walk past a bunch of shopping bags, and the most prominent among them was from the well known shop “Max Mara”. I couldn’t resist, so I nudged the monk and pointed to it and asked, “Do you know what that means?” He looked puzzled, so I translated it into Thai: “มารเต็มที่”. Did we laugh inappropriately? Yes, yes we did. 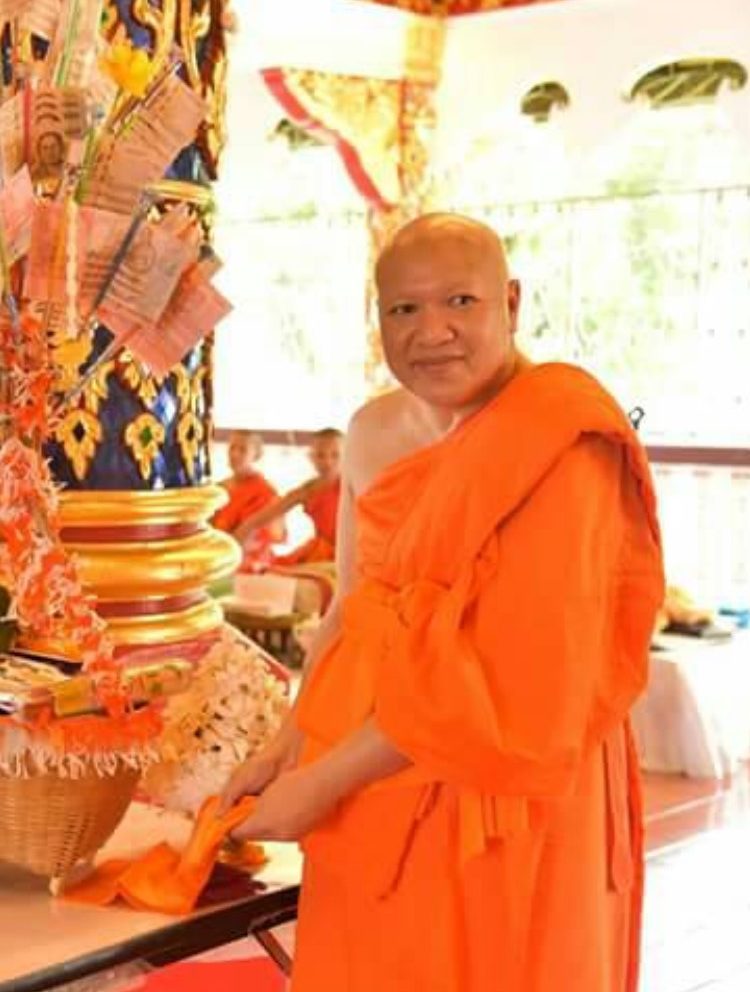 The abbot of Wat Suan Dok who was accused of stealing the ID of a dead novice monk in 1995 came out of hiding on October 27 to deny all allegations against him.

PS: I love Chiang Mai, and I love (with some qualifiers) Thai Buddhism. I have met some wonderful monastics here, and there are some truly great wats to visit with very good monks and nuns. Still, stuff like the above is just a reality check on a lot of what happens with Thai Buddhism.

My son is traveling in Thailand with his girlfriend, and sent me this picture: 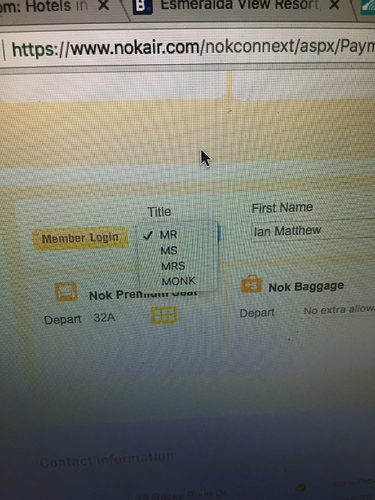 If he checks “monk” he’ll get an upgrade.

I hope your son and his GF have a wonderful time, Dan. The weather has turned absolutely perfect.

At the entrance to the “Maya Lifestyle Center” is a shrine to Ganesh. No Buddha to be found.

To be honest, I would feel even worse if there were a shrine to the Buddha in front of that mall.