Hello, friends of the SuttaCentral community

I was dissatisfied with the current offering of meditation timers on the App Store, so I decided to make one. Unless my financial situation changes, the app will remain completely free, and I will eventually port it to Android as well. I’d really appreciate it if some of you could test it, and help me out with your feedback, so that I can keep working on it and making it more useful.

Though the app is meant to be secular and useful for all flavors of meditation, I decided to name it Ochre, referencing the famed ochre robes from the Suttas (even though the main color of the interface is saffron yellow, but that’s just because ochre is not a pretty color for an interface

I should add that the app is super simple right now, so with your help, it could go in any direction. My intention isn’t really to turn this into another one of those guided meditation programs with a monthly fee, because there are plenty of those already (and they’re pretty good), and because of the enormous effort involved with such a project/business. I just wanted to make an app for everyone else who doesn’t need all the extra weight of such programs, or for that person who maybe already has a practice going (such as, I assume, ourselves in this community).

I welcome any and all feedback. Metta.

Do you know flutter or not ? It’s much better if you target both apple and Google platform

I don’t know Flutter, as of right now. But I have to learn it for work anyways, so I’m expecting that port to happen soon

I absolutely love it!

Congratulations and thanks so much! This is exactly what I was looking for too! Insight Timer used to be this quick and easy… but then they sold out.

My one request is going to sound hilarious, but hey! What is user feedback for?

While in “meditating” mode, the blue waves at the top should gently flow from right to left.

Thanks again for the nice little utility.

Cool timer. Nice and simple. I use Simple Meditation Timer for IOS. Check it out if you feel inspired.

This timer is programmed for increments of 5 minutes. It’s not often I want to sit for say 57 minutes, but it’s nice having the option to set in increments of 1 min.

I didn’t notice a (bell) sound to cue the end of my sit, without that feature I might end up sitting all day instead of going to work. Could be a good thing

If you don’t want it to evolve into a guided meditation app, I would suggest removing the instructions to “focus on your breath” and also the question “What is your goal?” …just a thought.

Thank you so much for your feedback, Bhante! That’s definitely a nice little addition. I’ll add it to my list of things to implement

Thank you so much for your feedback!

It does have a bell, but it does not sound if the phone is in silent mode

I’m still trying to figure out how to overcome this limitation, as this has been common feedback. And you are absolutely right, about the little “prompt” in the meditation screen; maybe a more neutral prompt would do it, or I could just get rid of it altogether. The goal question is about how long you want to meditate for XD But I know now that maybe it’s not clear enough.

I’m from the old school when it comes to meditation timers. I like how it has no notifications, security updates, and other forms of nagging/hassles/distractions: 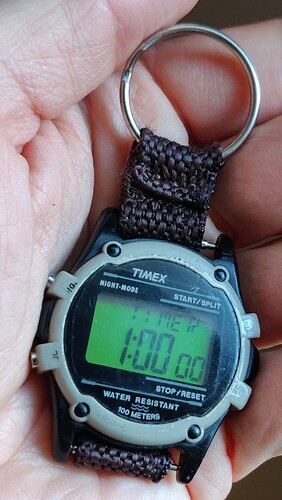 This “vintage” watch is 22 years old, and still works will. The pocketwatch-style nylon strapping is something I sewed myself.

I just wanted to make the point, that not everything needs to be an app! Sometimes the older technology had it right, IMHO.