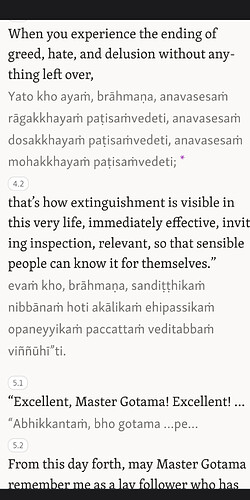 the Buddha said that nibbana is the ending of greed, hate and delusion above

now greed, hate and delusion are attributes of mind you can’t really separate mind from its attributes in that case nibbana is non greed , non hate and non delusion of the mind

but greed depends on mind, it only refers to mind, it can’t refers to other object since that is so it’s an exclusive attribute of mind while “blue” is an independent non exclusive quality that can attach to any object, greed could only attach to mind

even if you say what about “greedy human” ? but even in that case “human” actually refers the mind portion of that human, it doesn’t include that human body since there’s no greedy body, only mind can be greedy and only mind can be non greedy 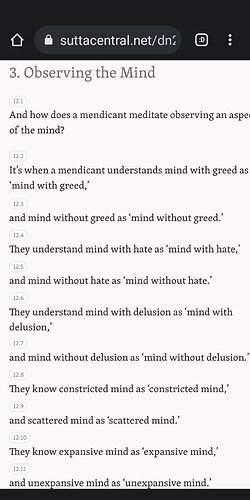 so nibbana is pure eternal consciousness without greed, without hate, without delusion

what do you think ?

I think you can say Nibbana is characterised by a mind free from craving, aversion and delusion. You could call that a pure mind (citta).

yes I think saying nibbana is pure consciousness actually proliferates the unproliferated so it’s better to say that it’s the ending of greed,hate and delusion

saying that it’s the ending of greed,hate and delusion (from the mind) means it’s pure mind which still proliferate the unproliferated too

furthermore Buddha focused on how to end suffering and greed,hate and delusion are the source of suffering

the only way to end suffering is to end these 3

Your argument relies on reification of “non-greed” etc into a substance requiring a vessel, your like the shopper in Chandrakirti’s story who goes into the shop and shopkeeper says “I am sorry, our supplier didn’t arrive and we have nothing to sell” and the shopper says “very well, I will buy a half a dozen of your nothings then”.

Good luck with your study,

i think the ending of greed,hate and delusion is parinibbana 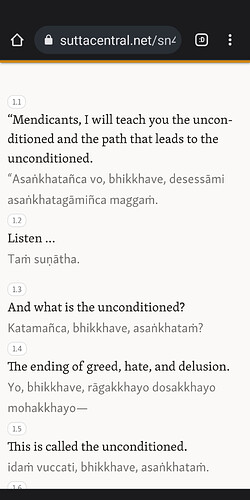 since it’s called the unconditioned

Is it accurate to say that Nibbana is just a state of mind (citta), or is there more to it?
There are Udana verses which seem to describe Nibbana as a different sphere (ayatana), and I’m not sure what that means.

I think these are states of mind. All the 8 states of mind(4 paths and 4 fruits). Well using ‘state’ word for mind would be contradicting it. Saying this would be misleading for those who just trust words.

Being aware of the above fact I also believe that we can say that it is a state of mind characterized by non-greed, non-ill will(non-hate), non-delusion.

i think the ending of greed,hate and delusion is parinibbana

@Alaray You are correct BUT when you talk about ending of greed, hate and delusion, you are NOT ONLY talk about parinibbāna. There are others below:

Now, let’s look at the property of unconditioned:

So, in the suttas, the Buddha was most likely referring to the Kilesa-parinibbāna (nibbāna with remainder), not the Parinibbāna. The reason is: Kilesa-parinibbāna can be experienced by the mind which is free of greed, hate and delusion; and the Buddha was instructing the monks how to train the mind to be free of greed, hate and delusion.

On the other hand, Parinibbāna is a very delicate topic and can easily lead to all kind of wild speculation theories as I already said in another thread here.

Hope that I managed to clear your confusion, Alaray

Kilesa-parinibbāna can be experienced by the mind which is free of greed, hate and delusion;

so you think nibbana is an experience ?
so without mind in parinibbana how could you experience nibbana ?

The mind at arahant level: not-self, impermanent and still with very very little of suffering if got clung to. This is conditioned.

but arahant have ceased greed,hate and delusion so why do you differentiate kilesa parinibanna and the mind of arahat ?

Just want to add, there is no kilesa-nibbana. Buddha never used this term ever. You might want to distinguish between these 2 types of Nibbana (ITI 44):

Kilesa is impurity. There is no impurity (kilesa) in Nibbana.

It is difficult to understand Nibbana for one who has not done with the path.

The easy way to understand is as Described AN 11.7,

This is peaceful; this is sublime—that is, the balancing of all process activities, the letting go of all attachments, the ending of craving, fading away, cessation, cooling.’

Have you cooled your body actitivites (sila) hence you can cool the mind (samadhi), hence the arising of wisdom(panna)/vimutti?

I think it depends how you interpret “unconditioned”. Does it refer to the mind being unconditioned by craving, aversion and delusion, or does it refer to Nibbana being an independent phenomenon, not subject to conditions?
And if Nibbana is unconditioned, does that make it an objective reality, something one “connects” with?

upādisesa means “some remaining fuel”. In this context, pointing to the presence of the khandas while an arahant is still alive. Though they’re present, there is no clinging, self-view ,or self-making, ahamkāra.

By definition, no kilesas can be present with respect to nibbāna.

The term “Kilesa-parinibbāna” is defined in this Dictionary of Buddhism by Damien Keown as below:

The condition or state of being awakened in this life (as was the Buddha) through the destruction of the impurities (āśrava) and defilements (kleśa). Also known in Pāli sources as the extinction of the defilements (kilesa-parinibbāna). In such a person the five aggregates (skandha) that constitute individuality remain, and he is still exposed to the possibility of suffering and the effect of previous karma. Only at death when final nirvāṇa (parinirvāṇa) is attained is suffering completely at an end.

I repeat here that you guys are correct

. Just that I did not invent that term “Kilesa-parinibbāna” by myself. I still acknowledge that it was still my ignorance for not showing the source of this term.

Anyway, it still does not affect the logic of my original post above.

so you think nibbana is an experience ?

@Alaray No, Kilesa-parinibbāna can be experienced by the mind which is free of greed, hate and delusion but it is not an experience.

so without mind in parinibbana how could you experience nibbana ?

The question regarding “experience parinibbāna” is equivalent to the one asking about experiencing inside the blackhole. This issue has been discussed in another thread before.

but arahant have ceased greed,hate and delusion so why do you differentiate kilesa parinibanna and the mind of arahat ?

@Martin In my understanding, it refers to Nibbana being an independent reality, not subject to conditions

And if Nibbana is unconditioned, does that make it an objective reality, something one “connects” with?

Nibbana is a reality. It is clearly announced in the 3rd Noble Truth.

There is nobody that enters or “connects” with it. For an arahant, “Self” or “Being” are just conventional usage of language.

No, Kilesa-parinibbāna can be experienced by the mind which is free of greed, hate and delusion but it is not an experience.

could color and sight be experienced by the mind which is free from defilements ?

The question regarding “experience parinibbāna” is equivalent to the one asking about experiencing inside the blackhole. This issue has been discussed in another thread before. 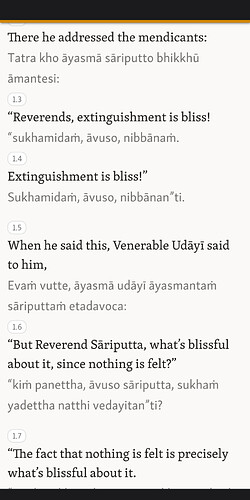 now even nothing is still something

there’s the knower, the things they know (nothing) and the process of knowing(knowledge)

now I don’t think nibbana know itself because knife can’t cut itself so it must be something external like consciousness without surface or something like that that experience nothing otherwise you couldn’t say that nothing exists because without the knower and the known, knowledge wouldn’t arise

So do you view Nibbana as an objective reality which is always there, waiting to be discovered?

Something useful to read

Basically we’re talking about Buddha-nature. We have to be really careful when establishing the idea of this Buddha-nature, otherwise it might end up becoming something like atman or a truly existing soul and so on. That’s why we talk about it as a quality that is the absence of the dirt. I’m telling you to be careful because the Mahayana shastras talk about the qualities of this ‘result of freedom’: the ten powers, the four fearlessnesses, the 32 major marks, the 80 minor marks, and so on. If you’re not careful, then you might start to think more theistically again. But all these are qualities of the absence of dirt
(Page 3)

[Q] What makes us different from Hindus, given that Hindus say everything is from Shiva?
[A] This is their job! (Rinpoche turns to Tulku Jigme Khyentse Rinpoche and Tulku Pema Wangyal Rinpoche). I’m kind of a Hindu myself! What do you want to know? The difference between Buddha-nature and atman or Ishvara?
[A] (Tulku Jigme Khyentse Rinpoche) I don’t have an answer to that, but I was just wondering if Rinpoche already answered this when he was explaining the slight difference in the way we are using the vocabulary of permanence, clean, self and bliss.
[A] (Dzongsar Khyentse Rinpoche) I didn’t even realise that!

I don’t know if this applies to all Buddhist schools, but the general rule or tradition in schools of Buddhist philosophy is that students study Madhyamika first, because it really helps to deconstruct all kinds of concepts. Madhyamika is followed by vinaya, metaphysics and all that. And gyü lama, the Uttaratantra, is taught at a later stage, often as the last text in the Buddhist curriculum, and many masters of the past say that the Uttaratantra is like a bridge between the sutras and tantra.
(Page 9)

So is there anything in the EBT corresponding to Buddha-nature? It appears to be a later development.

Also there seem to be different ideas about what Buddha-nature is. Some describe it as the potential for enlightenment, others describe it as some kind of essence, almost like an Atman.