I was blessed by the Buddha's bones 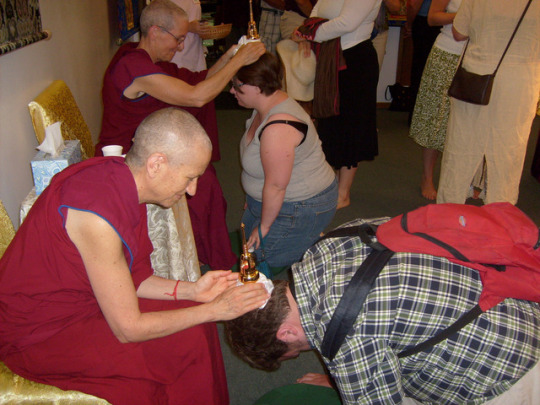 This is the Tibetan Buddhist nun, Thubten Chodron, blessing me with a relic of the historical Buddha.

She studied under the Dalai Lama and co-authored a book with him about Buddhism.

I don’t know if getting blessed by the Buddha’s bones had any spiritual effect, but it was a humbling experience.

Whenever I do bad things, I need to remember that I was blessed by the Buddha’s bones,

After the Buddha passed away, his remains were divided up and sent to various Buddhist kingdoms. It wouldn’t be surprising that, when missionaries first came to Tibet, they brought a relic of the Buddha with them:

Śarīra is a generic term referring to Buddhist relics, although in common usage it usually refers to pearl or crystal-like bead-shaped objects that are purportedly found among the cremated ashes of Buddhist spiritual masters…

There is evidence that under certain conditions of heating, human bones can form crystalline structures.[4] In one chemical analysis, śarīras were found to be composed of the constituent elements of both bones and stones.[5]
https://en.wikipedia.org/wiki/Śarīra

The Buddha relic was part of a traveling exhibit sponsored by the Dalai Lama.