The first two arupas are for good reasons translated as ‘…infinity of space’ and ‘…infinity of consciousness’. Yet the spelling is in a totally consistent way corrupted and I wonder if someone has the standard or an actually good explanation for it.

Here is what I mean:
ākāsānañcāyatana should be ākāsa + ananta + āyatana = ākāsānantāyatana
This is still okay if we allow ‘anta’ for some weird reason to turn to ‘añca’. It doesn’t work for the next one though

viññāṇañcāyatana should be viññāṇa + ananta + āyatana = viññāṇānantāyatana.
If we allow the same change of ‘anta’ to ‘añca’ we still have to explain

The Sanskrit spelling is consistently correct, compounding the full ‘anantya’, and also the sutta texts hint at the ‘infinite’. So the interpretation of the terms seems okay.
So is it just an ancient corrupt Pali spelling? Or (less probable) did they mean something else (e.g. -anta instead of -ananta, or the copula ‘-ca’) and invented ‘infinity’ around it?..

ākāsānañcāyatana should be ākāsa + ananta + āyatana = ākāsānantāyatana
This is still okay if we allow ‘anta’ for some weird reason to turn to ‘añca’. It doesn’t work for the next one though

I think that’s standard practice in pali, similar to bojjhanga = bodhi + anga. Forgot the grammatical term for that phenomena. It’s reflecting the tendency of people to soften the consonants to make words easier to pronounce. Similar to English “what you might call that = whachamacallit.”

Do you happen to know how ākiñcaññ - āyatanaṃ is un-compounded into parts in sanskrit?
Ākiñcañña (nt.) [abstr. fr. akiñcana] state of having nothing
for pali, I guess the extra “a” at the beginning is an “amplifier” of nothingness, obviously not a negation. Don’t know what the ññ comes from though, since it’s not in akiñcana

The arupas in Sanskrit are

All four are put together straight forward and correctly - maybe because the terms are newer and got rid of archaic inconsistencies?

Edit: the ‘añca’ is not a crucial problem, maybe they softened it, but it’s not the result of a sandhi, just the normal word ‘anta’. ‘n’ and ‘t’ are both dental - why would it need to be softened? ‘anta’ goes off the tongue quiet well…

ākāsānañcāyatana should be ākāsa + ananta + āyatana = ākāsānantāyatana
This is still okay if we allow ‘anta’ for some weird reason to turn to ‘añca’. It doesn’t work for the next one though

I think that’s standard practice in pali, similar to bojjhanga = bodhi + anga. Forgot the grammatical term for that phenomena. It’s reflecting the tendency of people to soften the consonants to make words easier to pronounce. Similar to English “what you might call that = whachamacallit.”[/quote]I think you are talking about elision and lenition, but I can’t remember either.

Its related to the same process that, over time, changes pratītya- into paṭicca- as well, although that is on a larger level.

Cool question, definitely one for the Pali nerds!

So first of all, as seen in the Sanskrit form, the phrase uses the abstract for anta:

This resolves to ~nc in Pali. When the ya ending is added to ananta via secondary derivation, the initial vowel is also lengthened, resulting in the form ānañca, literally, “infinitude”. This is, however, so far as I can tell, only found in this context.

The commentary to this passage, as usual for the core doctrinal tropes, is found in the Visuddhimagga, here with Nyanamoli’s translation:

So the main point here is that the contracted form is not explained, except as being an idiom. Probably there is more to it, in the dialectical process involved, but that’s all we’ve got.

Also note that the commentary effectively says that the normal and absract forms are the same. This is not uncommon, in Pali or in English. However if you wanted to preserve it you could say “infinitude of consciousness”.

Thanks for digging through the Viss!

Looking for it I now also found the contracted form in Sanskrit, but with the long ā. I have no skills at all with Sanskrit Buddhist texts, so no idea if there was a consistent old writing…

ugh, what a rabbit hole!

I suspect the issue has to do with the already-extended form of viññāṇa. As the root is ñā, the final syllable is already an addition, and you could in principle form a single-syllable noun with prefix, along the lines of saññā, paññā, etc., i.e. viññā. I suspect there may be some dialectical variation on these lines, which ended up with the contracted form. But like I said, “suspect”.

As for nt > ñc, I believe venerable Sujato gave a very good and concise explanation. As for the elimination of the -na- syllable in viññāṇañcāyatana, I think it could be explained by the phonomenon known as haplology: quite often when there are several identically or similarly sounding syllables standing next to each other, one of them tends to be eliminated in speech, e.g.:

The elision of the -na- syllable is actually indirect evidence that the precursors of Pali or at least this particular word functioned as living actively used languages, and that this particular term was handed down in an ‘informal’ oral tradition. As you certainly know, Sanskrit is a somewhat artificial language that did not evolve naturally but rather is something like a distillation of what the ancient Brahmins and Indian Grammarians considered to be good Vedic usage with the rich diversity of ancient alternative forms somewhat trimmed down. This was a language that no-one really understood unless they studied it for years, and when they did study it, they focused a great deal on formal correctness à la Pāṇini, so no wonder there is no haplology in the Sanskrit term: they didn’t care if this word is difficult to pronounce in Sanskrit, whereas the Pali or proto-Pali reciters didn’t care if it is grammatical to omit one of the syllables, they prob’ly didn’t even notice the elision.

When i first saw you answer, I thought it seemed probly right, but on further thought I reckon it’s defnitely the case!

The funny thing about these words is that you don’t really notice that you’re making the change in speech, unless you pay attention. But it sounds weird to say the full thing.

This was actually the first idea a dhamma-friend of mine had, but then I thought ‘since when did Indians have problems with long multi-syllable words that are difficult to pronounce’?

Did you come across this phenomenon a lot with other composits, bhante?
Something my Latin teacher told us and that might add to your argument comes to my mind “Irregular changes of words occur most in words that are used a lot”

Yet here are some randomly picked up words I’d like to simplify as well, there are probably tons of them… panānananda - aññoññassābhinandanti - abhinandanamaṭṭhamaṃ

I bet the words you gave as an example are not used as frequently as the names from the arupas. There are no statistics for which languages are prone to haplology and and which not, as well as which words are more likely to have omitted syllables, but I think that a high frequency word with three similar -na- syllables next to each other is a better candidate.

In fact if it is a linguistically sound explaination that occurred to several persons as their first though on the matter, it is very probable to be true. I will have a look in the Geiger’s Grammar, maybe he says somethin about haplology as well.

Gieger doesn’t mention haplology but then his grammar is rather old and may not account for all phonological peculiarities of Pali. The Pali grammar by Thomas Oberlies provides a few examples of haplology: 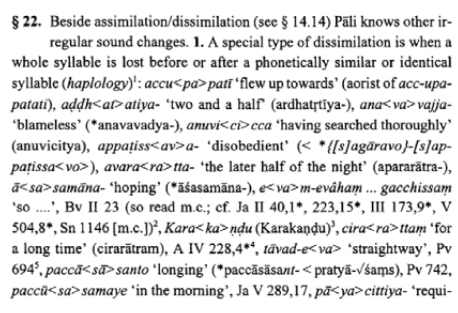 It’s an interesting hypothesis though, also of course if it might account for the analysis of some other doctrinal terms. Also if it’s consistent in all old manuscripts…

Did you come across this phenomenon a lot with other composits, bhante?

Yes, it’s not unique. But I can’t think of any cases off the top of my head. It is mentioned a few times in the PTS dictionary: