Influence of Chinese dialects on transliteration of proper nouns in sutras

I’ve been wondering about this since I heard about the difficulty of reconstructing the original Sanskrit versions of proper nouns in Chinese Buddhist texts. I used to know some Mandarin Chinese, which I studied in China. One thing you learn quickly in China is how many dialects there are and how different their pronunciation can be. So, I’ve been wondering if modern scholars who are trying to reconstruct proper nouns are taking this into account? Maybe @cdpatton knows?

Yes. But it’s more complicated than just the Chinese pronunciations. Scholars have reconstructed classical and middle Chinese syllables from rhyme books written during the Tang and Song dynasties that would have been the actual sounds of transliteration. And they were often very different than Mandarin. Mandarin is a fairly new language in China that developed after the Song fell.

The unknown in reconstructing early Buddhist transliterations is the Indic original, which was often a Prakrit like Gandhari instead of Sanskrit or Pali. The shifting pronunciations of Buddhist Hybrid Sanskrit also adds uncertainties. There are scholars who spend their time trying to deduce the original Indic language of early Chinese translations. It’s quite a detective story because we have only fragments of some of those languages today.

Given the complexity of it, I revert to Sanskrit forms of the transliterations just to make it simpler for the reader. It’s difficult enough having Sanskrit and Pali versions of terms and proper names to keep straight when comparing parallels in English.

Given the complexity of it, I revert to Sanskrit forms of the transliterations just to make it simpler for the reader.

No one wants to have to learn “uasao” for “upasaka.”

Scholars have reconstructed classical and middle Chinese syllables from rhyme books written during the Tang and Song dynasties that would have been the actual sounds of transliteration.

The unknown in reconstructing early Buddhist transliterations is the Indic original, which was often a Prakrit like Gandhari instead of Sanskrit or Pali.

I just read about that in one of Richard Salomon’s books. He believes the “Gandhari hypothesis” have been proven to be correct.

It’s difficult enough having Sanskrit and Pali versions of terms and proper names to keep straight when comparing parallels in English.

Yes. Which meant syllabaries had to be devised to teach students how to pronounce them, which are recorded for us in classical rime dictionaries. There’s a good summary of Chinese rime dictionaries in Wikipedia. They used characters to represent sounds and combined them to describe how to pronounce words. Even back in classical times, Chinese scholars realized that their language was changing. During the Song dynasty, they were reconstructing the pronunciations of Tang dynasty texts and creating new syllabaries to keep up with the times.

I just read about that in one of Richard Salomon’s books. He believes the “Gandhari hypothesis” have been proven to be correct.

Yes. What’s unfortunate is that almost all of the original Gandhari texts are lost. But when I’ve compared the early Chinese transliterations to known Gandhari words, they make better sense than comparing them to Sanskrit. There seems to have been a gradual adoption of BHS and then Sanskrit. So, by the time Xuanzang was translating texts, they were Sanskrit. But the Agamas and maybe even Kumarajiva’s texts don’t seem to be from Sanskrit.

I wonder if @cdpatton has any thoughts on this, but I always thought that if you want to “cheat” (i.e., get a better feel of the ancient pronunciation without always referring to the reconstructions, or if you have a word with no known reconstruction), the Japanese “on-yomi” and Cantonese pronunciations might be closer to the middle Chinese than Mandarin? I had always heard that Cantonese is “older” (in a very vague sense?) and I vaguely recall that friends of mine had recommended learning Tang poetry in Cantonese over Mandarin?

I haven’t been reading about this for some time now, just T=to add to the discussion based on my recollection:

I am Cantonese who has lived in Japan. I heard the same about Cantonese closer to Tang poetry

I’m not an expert about modern Chinese dialects (or actually the various Chinese languages), but my understanding is that Cantonese preserves some of the full stop ending consonants that Mandarin dropped, making it more like pre-Mandarin Chinese.

What does it even mean for Chinese to rhyme? Like shi and zhi (using pinyin to represent a Mandarin pronunciation)?

Often times the further back you go in Chinese, the more Byzantine the syllable structure gets. Have you ever seen Tibetan written out? It has words like “bsprugs.” So things can rhyme more when there is more detail in the word and it is not as stripped down. Chinese did not used to be tonal. The tonogensis of Chinese was accompanied by the words becoming “clipped,” one could say, and phonetically simplified.

Chinese did not used to be tonal.

What’s even crazier is look at these inflection tables.

Many verbs exhibit stem ablaut among the four stem forms, thus a or e in the present tends to become o in the imperative byed, byas, bya, byos ('to do'), an e in the present changes to a in the past and future (len, blangs, blang, longs 'to take'); in some verbs a present in i changes to u in the other stems ('dzin, bzung, gzung, zung 'to take'). Additionally, the stems of verbs are also distinguished by the addition of various prefixes and suffixes, thus sgrub (present), bsgrubs (past), bsgrub ...

Modern Tibetan is not inflected like this. You don’t pronounce most of the letters in modern Tibetan – they are artifacts of former pronunciations. You can see tonogenesis in action though.

When you spell out the Sanskrit word “padme” in Tibetan script, the d is not pronounced and causes the a vowel to mutate into an e. It also causes the tone of “pad” to change. The result is “peme” with tones that I don’t know how to indicate.

This reconstruction has the IPA, but the speaker is really really struggling with some of the consonants that the old Chinese is requiring him to make: 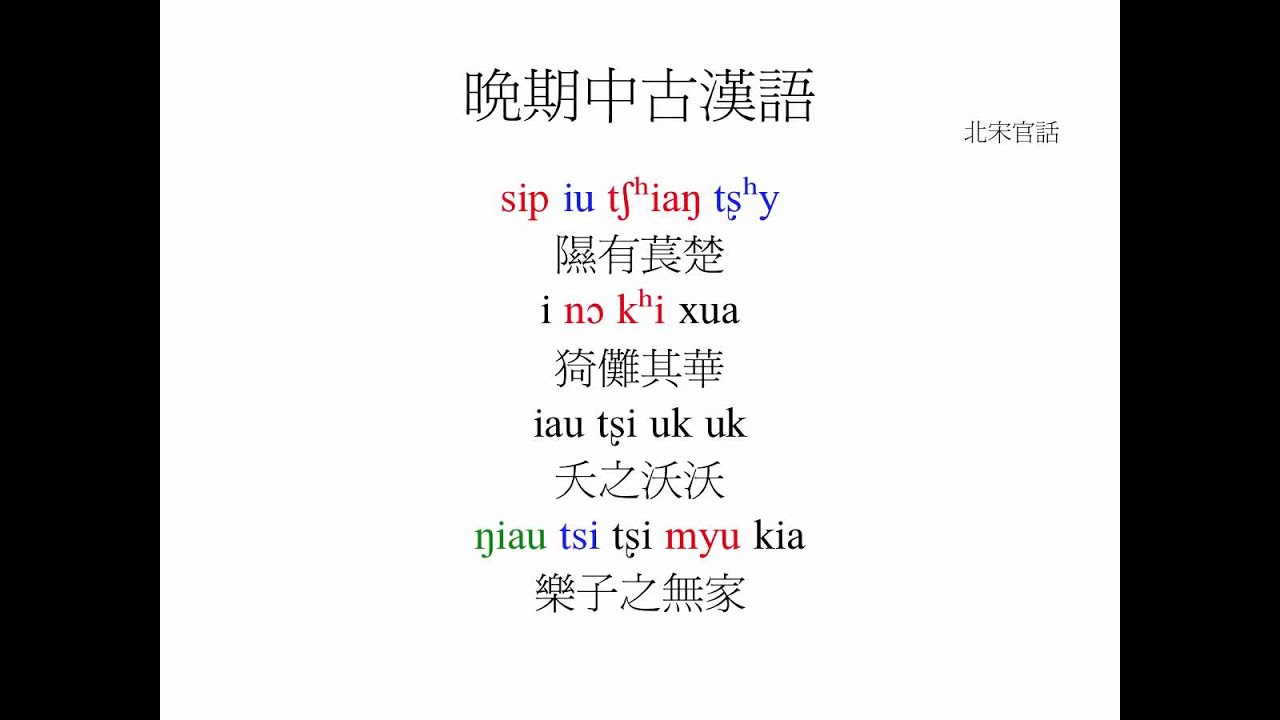 As you can see, the speaker is really struggling with the rolled R’s and consonant clusters. I don’t know if there are better videos for this.

That’s supposed to be how an older form of Chinese sounded?

Well, it’s a reconstruction and the speaker is really struggling with it. A native historical speaker, if the reconstruction is accurate, would have these complicated syllables roll off their tongue naturally.

He has the most trouble with the R’s.

an older form of Chinese sounded?

Oh, right. I see at the end it says “Modern Chinese” wirtten above the poem while he’s reading it in Mandarin.

What does it even mean for Chinese to rhyme? Like shi and zhi (using pinyin to represent a Mandarin pronunciation)?

Mandarin is much simpler than Middle Chinese, using vowel tones to create a large number of syllables. Middle Chinese had more ending consonants like ‘d,’ ‘k,’ ‘t,’ and ‘p,’ and half the characters were level tone during the Tang dynasty (meaning, the way we pronounce vowels in English).

I’ve read that rhyming was a skill required to pass the entrance exams for the civil service during the Tang and Song dynasties. You were expected to be a decent poet and even rhyme in prose to prove your literary skill. Many of the rime dictionaries were maintained to standardize the pronunciations in order to grade the exams objectively.

@Coemgenu, I have seen reconstruction of ancient Chinese (the period of Shi Jing, Classics of Poetry, ~1000BC) that puts Chinese words to be multi-syllabic and non-tonal. I think that was wild, but I am no linguist to judge.

@cdpatton, in the Buddhist context, I read an anecdote of a Japanese monks who stayed in China.

Kukai (founder of the tantric sect in Japan) actually wrote a book on Chinese poetry. A later monk (I think one of the Tendai monk, forgot exactly who), when travelling in China was routinely asked to write poetry (that was part of socialization among literati), but he had made a vow not to write Chinese poetry as it was a waste of time against making progress in his Buddhist training; the Chinese literati thought him strange of refusing to write poetry.

@dayunbao, simply put, yes, it is end syllable rhyming. I think in the sound denotation example
(“dig” = “dog” + “pig”), so when you have the last word of the 2nd sentence and the last word of the 4th sentence ending in the same second word (i.e. you can express both those words as “x” + “pig”, then you are rhyming.